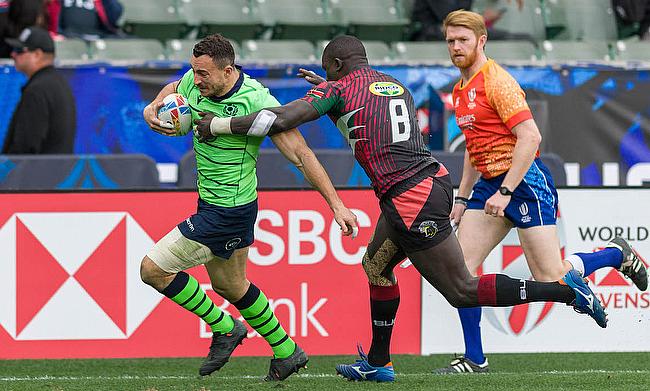 Setbacks in life can be hard to bounce back from, but they can also make you more determined - and in Jamie Farndale’s case, missing out on selection for the 2016 Olympic Games in Rio left him fully focused on making it to Tokyo.

The showpiece sporting event was of course supposed to happen last summer before the pandemic knocked things back a year.

As it stands, the men's sevens in Japan will take place between July 26 and 28 with the women's sevens happening between July 29 and 31, both in the iconic Tokyo Stadium which was used during the men’s Rugby World Cup in 2019.

There is a lot of water to go under the bridge on many levels before the first tie kicks-off as scheduled on July 26, but Team GB have been moving forward in terms of selection after naming both their men’s and women’s training squads last week.

Both squads will be based at Loughborough University with their first camps set to take place this month ahead of their pre-Olympic tournaments, details of which will be announced in due course.

Farndale, who is currently on Edinburgh Rugby’s books and has played in 43 World Sevens Series events - including 41 in a row at one point - is one of six Scots in the men’s squad.

“I have really enjoyed being involved with Edinburgh [since the summer of 2019], but I have always made it clear that Tokyo was on my radar and [Edinburgh head coach] Richard Cockerill has been really understanding about that,” the 27-year-old, who plays prop or winger in the abbreviated form of the game, told TRU.

The HSBC World Rugby Sevens Series 2021 is all set to kick-off in Paris!

“He allowed me to join up with the Scotland Sevens guys to play tournaments in Los Angeles and Vancouver last year before lockdown came and that helped me push my case for Team GB selection, so I am thankful to Cockers for that.

“I am over the moon to now be in the training squad that will be working towards Tokyo and it’s all I’ve thought about since missing out on Rio.

“Ahead of that Olympics, I was in the wider training squad and was coming off a great 2015/16 season with Scotland on the World Series.

“I was only quite new to top-level sevens, but once I had a chance of getting to the Olympics, I put everything into it, but injury-hit and ultimately I fell short.

“In the first warm-up tournament in Moscow that we played as Team GB, I injured my hamstring. It looked like being an eight-week injury at first and that took us past Rio so I thought that was it.

“However, I stayed with the group and worked hard with physio Ally Little [who now works with Scotland at sevens and XVs level] and managed to get back fit in four weeks.

“I was involved in the last tournament before Rio in Exeter and played some of the best sevens I had ever played, but it was too little too late and the lay-off probably counted against me in the final selection.

“It was such a strange time with emotions being up and then down, but once I had got over missing out, I refocused and set myself the goal of making it to Tokyo - and that is still my goal now.

From now until July, all of the men’s training squad - made up of 12 Englishmen, the six Scots and three Welshmen - will be out to impress head coach Tony Roques.

When Team GB won silver behind Fiji in 2016 in Brazil, there were two Scots in the squad in the shape of Mark Bennett and Mark Robertson.

Farndale, who played in the World Cup in San Francisco in 2018, hopes to be one of a number of Scots heading to Tokyo - and he has given his assessment of his five international colleagues who are in contention.

“Robbie Fergusson is a very resilient, determined guy and he has led Scotland well when he has been captain,” Farndale states.

“His tactical awareness is awesome and he reads the game well, being two steps ahead of others at times.

“Ross McCann is such a talented player. He gives it everything in training and at tournaments and he is one of the toughest guys to tackle when he gets on the front foot.

“Max McFarland is one of the best finishers I have ever played with. He can get the ball in no space and then beat four people and dot the ball down. He can help the team gain momentum in a split second.

“Alec Coombes is just a big, powerful runner. When he gets the ball he is going forward for sure. He loves to take on his opposite man and he often drags in defenders which then creates space for his teammates.

“And Paddy Kelly has a great skillset, his offloading game is really key. He will get the ball out of contact and keep it moving which is so vital in sevens while he is also great at reclaiming restarts.”

“It would be brilliant to have male and female Scottish players at the Olympics.”

Like in the men’s group, there are six Scots in the women’s training group with head coach Scott Forrest also from north of the border.

Megan Gaffney, Rhona Lloyd, Helen Nelson, Chloe Rollie, Hannah Smith and Lisa Thomson are the ones aiming to make it with 11 English and two Welsh players also in the mix.

“Scotty came in and coached the Scotland men’s squad in Paris a couple of years ago and he really knows the game of sevens inside and out,” Farndale, who is close to completing a Business Management degree at Edinburgh Napier University, said of Forrest.

12 players have been named across Men’s and Women’s 7s training squads for this year's @Olympics.

“He is a really good leader and players look up to him and respond to what he is telling you. Over the last couple of years, he has worked really well with the Scotland Sevens’ women and he deserves his chance with Team GB.

“As for the Scottish women, there are clearly some talented sevens players in their ranks and I watched them play over in Hong Kong [when they were runners-up in the Women’s Sevens Series qualifier] back in 2019.

“They scored some great tries and it is great to see six players in with a chance of making Tokyo - it would be brilliant to have male and female Scottish sevens players at the Olympics.”