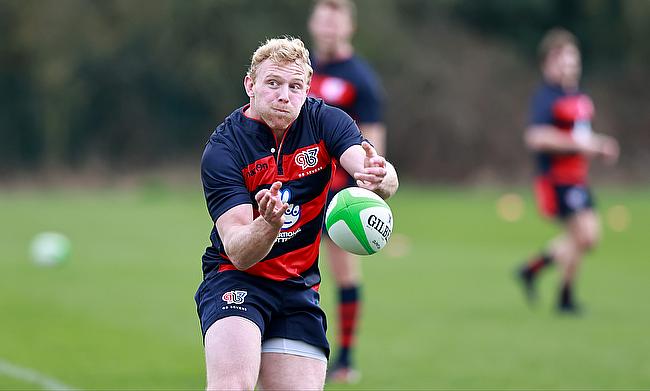 Great Britain men's side will be joined by USA and Ireland at St. George’s Park this weekend
©Scottish Rugby/2021 Getty Images

As a youngster growing up in Hong Kong, Alec Coombes was lucky enough to attend the world-famous Hong Kong Sevens a number of times and he even took part in the parade on the pitch in between ties.

He says being at those big occasions is where his love of rugby comes from and although he has not managed to play there for Scotland in a World Sevens Series event yet due to injury, it is on his bucket list.

For now though, he has just one goal on his mind - to make the GB Sevens squad for the upcoming Tokyo Olympics.

“I went to the Hong Kong Sevens as a kid and that sparked my interest in rugby and now I want to play in the Olympics,” the 25-year-old Scotland player told TRU ahead of the International Rugby Sevens Olympic preparation event at St. George’s Park this coming weekend.

“Both times I would have had the opportunity to play in Hong Kong with Scotland in recent years, I have been unable to due to injury. I am sure my time there will come though and for now, all I am really thinking about is the Olympics.

We will be hosting 'International Rugby 7s' as an Olympic preparation event from 15-17 May ??

The tournament will take place at St. George’s Park and will feature USA, Ireland and France ??

“The last couple of months in GB Sevens camp in Loughborough have been brilliant. The wider squad of guys from Scotland, England and Wales have integrated and gelled really well and we have all been working hard at learning the new calls, structures and moves that the coaching team want to implement in time for Tokyo.

“Training has ramped up a bit now as the Olympics get closer and we are all trying to prove that we deserve to go to Tokyo and are eager to show what we can offer, but guys have also been really good at helping each other out as we try to improve as a unit.”

Coombes, who scored a try with his first touch of the ball in international sevens back in 2018, was with Edinburgh Rugby for the first six months of the 2020/21 campaign and made his debut for them off the bench against Ulster.

When he found out he was part of the GB Sevens wider squad a few months ago, Edinburgh head coach Richard Cockerill let him leave the capital with his blessing and the man who plays centre/wing in XVs is also a very useful prop in the abbreviated version of the game.

“I have learnt to love the role that I have in Sevens and have really worked hard at the nuances of it and what I have to do as a prop to help the team I am playing for at any given time,” he explains.

“There are a lot of hard yards to do as a prop while your offloading game and being able to free your hands and get the ball out of contact has to be pretty sharp.”

As mentioned, Coombes lived the early years of his life in Hong Kong before a move to Somerset further ignited his passion - and talent - for rugby from the age of 11.

“My grandma moved to Hong Kong when she was 21, so my father was born there as were myself and all of my siblings,” Coombes explains.

“It was a great place to grow up. There is a complete mixture there. For example, one minute you can feel like you are in a concrete jungle and then just 20 minutes away there are amazing beaches and a really chilled out atmosphere.

“In terms of growing up there, I played lots of different sports and really enjoyed them, but I knew that if I wanted to become an elite athlete, I needed to be training and playing at a higher level more regularly, so I moved over to boarding school in the UK and went to Millfield School.

“I really enjoyed it there and it pushed me on with my rugby. There was some top quality rugby talent there and as we moved up into the first XV, it was clear that we had a good team.”

At Millfield, Coombes played 13 in a senior XVs team that included Callum Sheedy [now Bristol Bears and Wales] at 10 and Adam Hastings [now Glasgow Warriors and Scotland] at 12, so that midfield caused opposing sides a few issues.

“In my final year, we had a good XVs season, losing only once to Sedbergh School I think, and the Sevens season was phenomenal,” Coombes recounts.

“We won every tournament that we went to and we were averaging 43 points in every tie. Among the tournaments we won was the Rosslyn Park Sevens which is well known and Tom Varndell [the Gallagher Premiership’s all-time leading try-scorer] was presenting us with our medals which was really cool.”

Scottish roots: “My grandma is the most Glaswegian sounding person you could ever meet!”

On leaving school, Coombes had a number of options, but he was keen to make a go of things in rugby and joined London Scottish.

That was where he first met John Dalziel, the now Scotland forwards coach, who put him in touch with Scottish Rugby and from there, he played for the national under-20s team in the 2015 Six Nations as well as the World Championships in Italy.

“I always knew of my Scottish roots because my Dad is fully Scottish and my grandma is the most Glaswegian sounding person you could ever meet, so to play for the country was an amazing feeling,” Coombes said.

“My grandma is back living in Scotland now while my Dad is still in Hong Kong and they were both very proud when I played for the under-20s which was nice.

“During that time, Mike Friday, who is now with USA Sevens, was coaching at London Scottish and working with him really helped my understanding of the game and what I needed to do to succeed at a senior level because his attention to detail was second to none.”

INTERVIEW | Scotland 7s star Alec Coombes on life on the circuit and why Vancouver is his favourite @WorldRugby7s event. #AsOne https://t.co/b4bSMPoUf1

After three seasons with London Scottish, Coombes was invited to train with the Scotland Sevens extended squad who were at that time being coached by Dalziel.

Things went better than he could have imagined and Coombes was brought straight into the squad to travel to the next World Sevens Series event in Sydney, Australia.

“It was all a bit of a whirlwind, but I played that tournament and ones in New Zealand, USA and Canada and was then picked to go to the World Cup in San Francisco that summer [2018], so it was a steep learning curve for me in sevens, but a brilliant journey,” Coombes states.

“I then became a core member of the squad for seasons 2018/19 and 2019/20 and learnt so much under John and then under current head coach Ciaran Beattie.”

And Coombes is now eyeing up the latest step in his Sevens journey and he will be hoping his next chapter will be written in Japan this summer.