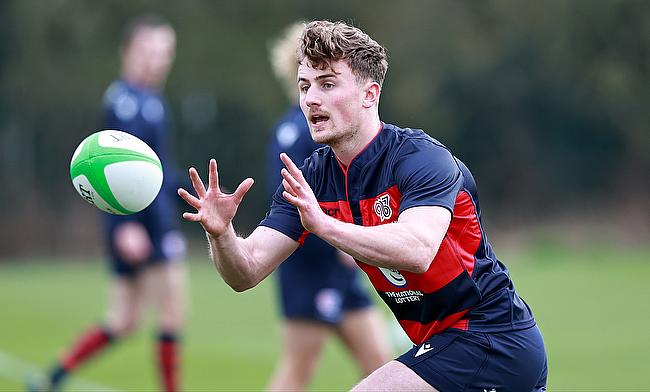 Paddy Kelly’s first World Sevens Series outing for Scotland came in January 2020, so it is fair to say he was pleasantly surprised when he was called up to the GB Sevens training squad ahead of the Tokyo Olympics.

As it stands, the men's sevens in Japan will take place between July 26th and 28th - with the women's sevens happening between July 29th and July 31st - both in the iconic Tokyo Stadium which was used during the men’s Rugby World Cup in 2019.

Kelly, the 25-year-old from Inverness who has been on the books with Glasgow Warriors, has had to deal with many injuries in his career, but a setback he suffered two years ago threatened to derail him again.

“From the start of the 2019/20 season, I was in training with the Scotland Sevens boys regularly and there was a great atmosphere in camp with a young group of boys, many of whom I was already good mates with,” Kelly tells TRU from Loughborough where the GB Sevens squad are training.

“Ciaran Beattie had just come in as head coach and everyone was out to impress him. I had a lot to learn having transitioned from XVs, but I felt I was going well before I tore my hamstring before the opening World Sevens Series legs in late 2019 and I thought to myself, ‘this is going to be a nightmare to break into the squad now’.

Another step closer to #Tokyo2020

“Thankfully, I managed to get fit around the turn of the year and then I was selected to go to the next four legs of the World Sevens Series in Hamilton in New Zealand, Sydney, Los Angeles and Vancouver.

“Playing in those tournaments was great for me and you learn with every tie you play against world-class athletes. Things happen so quickly out there on the pitch and you have to react quickly or else you are left behind.

“Sadly after the Vancouver leg last March, everything was shut down due to the pandemic.”

Last summer, Kelly was back in pre-season training with Glasgow and was set to play against Ulster in the Guinness PRO14 before he tore his calf.

“I am used to injuries, but that one really hurt given that I was going to be getting a chance with Glasgow with guys away at the Autumn Nations Cup,” he explains.

“It took me a wee while to get over that and although the Tokyo Olympics had by that stage been postponed, I didn’t think I was in the mix because the Scotland guys who were in the mix, had it happened in 2020, had already been told plus I was so new to the game.

“However, earlier this year I got told I was in the extended GB squad and it really gave me a big lift and something to aim for.

“The camps we have had so far have been really good. There is a lot to take on board, but as a new player to sevens, I am just soaking it all in and continuing to learn my new role as a prop or hooker. I am happy to be a workhorse around the park for the team.

“Sevens has reinvigorated me as a player. Now I’m giving it everything to make it to Tokyo.”

Friends reunited: “It is funny how it has worked out”

Kelly is currently in the GB Sevens squad with five other Scots - Ross McCann, Alec Coombes, Robbie Fergusson, Jamie Farndale and Max McFarland – and three of them he knows well from earlier in his career.

Having grown up in Inverness in the Scottish Highlands, attended Millburn Academy and played rugby for Highland, he moved to Edinburgh when he was 14 years old to attend Merchiston Castle School.

“That really helped me kick on with my rugby and break into representative squads,” Kelly, who made his full Glasgow debut in late 2016, states.

“After school, I was keen to take a gap year abroad and a friend of mine Euan Mackintosh, who is now coaching the China women’s sevens team who are going to the Olympics, helped set me up with a club in France called Le Parc

“I was based in Aix-en-Provence which is a stunning city and I learnt a lot out there as a young player.

“During that year, I was travelling back and forth to Scotland to play for the under-20s and then Glasgow offered me a Stage Three Academy contract which meant that I could train there as well as studying English at Glasgow University.

“At first, I was with Glasgow Hawks which was a good introduction to senior rugby, but I hadn’t been able to play much because of a shoulder injury so it was good to then get to go to New Zealand on the MacPhail Scholarship in around April 2016.

“I went there with Ross McCann and then in season 2016/17, I was at London Scottish for a large chunk of time playing alongside Coombsey and Robbie, so it is funny how it has worked out and we are now all in the GB Sevens set-up.”