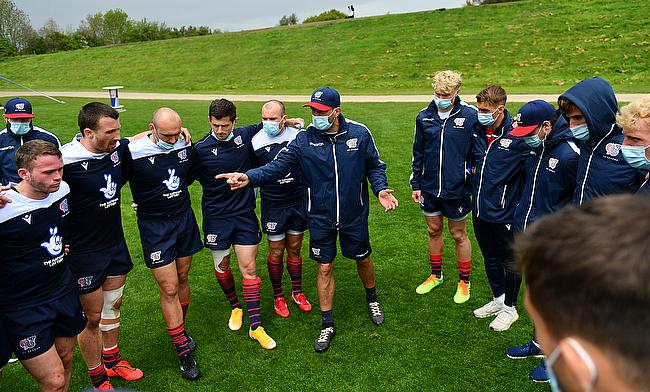 Alex Matthews Exclusive: “I used to be scared to make mistakes - now I play with a smile on my face”
Alec Coombes Exclusive: “I went to the Hong Kong Sevens as a kid - now I want to play in the Olympics”
Paddy Kelly Exclusive: “Sevens has reinvigorated me as a player”
England and GB Sevens star Phil Burgess announces retirement

GB Sevens men’s head coach Tony Roques admits his notebook is full of scribblings and different ideas after the Olympic preparation event as he continues to try and find the right combination of players to take to the Tokyo Games in July.

Having not played competitive sevens for so long, it was perhaps not surprising that the members of the GB wider squad were straining to get going on Saturday ahead of their opening tie with Ireland at St George’s Park in Burton upon Trent.

And the team came out of the blocks flying as tries from England’s Tom Bowen and Harry Glover saw them clinch a 12-7 win.

They then turned on the style later that day to see off the USA 33-12, England duo Alex Davis and Tom Emery among the tries, along with Scotland’s Max McFarland and Jamie Farndale (2).

On day two, further wins came against the same opponents before losses against them on day three. Ireland actually finished top of the standings with GB second and the USA third, but this exercise was all about performances rather than results and seeing which players could put their hands up for the Olympics.

“It was really good to see how all the guys reacted to things during an actual competition,” Roques, 42, said to TRU after the competition had concluded.

And that's a wrap??#InternationalRugby7s came to a conclusion today and here are the results from today's games.

“Obviously, we had to balance a lot of things over the three days and we wanted to get all the guys a fair bit of game time and work on different combinations. That was always going to have its difficulties at times and we scraped through a couple of ties on day one and two that we were lucky with and on day three, we had a couple of losses.

“In general though, I saw a lot of good things and there are lots of learnings to take from this competition - and the last few days have shown me that the lads are certainly up for this challenge.

“There is still a mountain to climb and a lot of work to put in before Tokyo, but this gives us a solid base to build from. We will now work hard to improve and get better.

“I have certainly learnt a lot as a coach since Saturday and this tournament just re-emphasised to us all how strong you have to be on kick-offs in sevens and aerially too.

“You need strong players in those areas where you need playmakers who are driven and determined to dictate the way that your play is going and you need to have powerful strike runners and edge runners to cause opponents damage when you get a bit of space.

“Now I have to sit down with the other coaches involved in the programme and work out how we best move things forward.”

The women were up against France and Ireland and finished second in the standings after three wins, one draw and two defeats.

France finished top with four wins and two losses, but again this exercise was all about performances and trying to blend together combinations of the best players from England, Scotland and Wales.

On day one, the GB women started with a 26-24 loss to the French but bounced back to defeat Ireland 29-21 in a cracker. England duo Abbie Brown and Emma Uren both scored two tries apiece, with Wales’ Jasmine Joyce also crossing.

Another loss at the hands of France came on day two along with a second win over Ireland.

On day three, Scotland’s Rhona Lloyd scored a hat-trick of tries before Ireland snatched a last gasp 19-19 draw and then GB finished in style with a 33-7 triumph against France. Scotland’s Hannah Smith and England pair Deborah Fleming and Helena Rowland were amongst the scorers.

"It was great that the girls could finally focus on wearing a GB top,” Forrest, 36, told TRU.

The @GBRugbySevens women drew 19-19 V Ireland in the Olympic preparation event at St George's Park this lunchtime + @Scotlandteam flyer @RhonaLloyd96 bagged a hat-trick of tries, she now has six tries in the last three days pic.twitter.com/9dVZ5UPZhi

“We had to look to take a step forward during this competition and the majority of the players involved in the wider squad did that here. You can train all you want, but nothing can replicate matches and that kind of decision making under pressure.

“I challenged the team to improve our performances each time we took to the field over the three days and I was pleased that on the final day we could have beaten Ireland and then did very well against France.

“The last win over France was the highlight. Lots of rotation over the first couple of days meant we just saw glimpses of what we can do in defence and attack, but that France performance is the one we have to now use as a benchmark and build from there.”

One player who certainly showed up well was the aforementioned Lloyd, the 24-year-old Loughborough Lightning flyer bagging six tries over the three days, impressive given she is just back from a hip injury.

“She didn’t train with us in the first few weeks of camp because of her injury, but she worked very hard to get herself back on the pitch and going into this event, there was no pressure on her from me.

“To go out and do what she did was brilliant and she showed real energy and awareness for some of those scores. She is an infectious person in this group and a big character which is what you need.”

Given the ongoing pandemic, both the GB Sevens sides next moves have not been confirmed as yet, but everything is building towards their Olympic events which run from July 26 to July 31 in the Japanese capital.