Schoolboy Norrie learning all the time and has Fagerson for inspiration 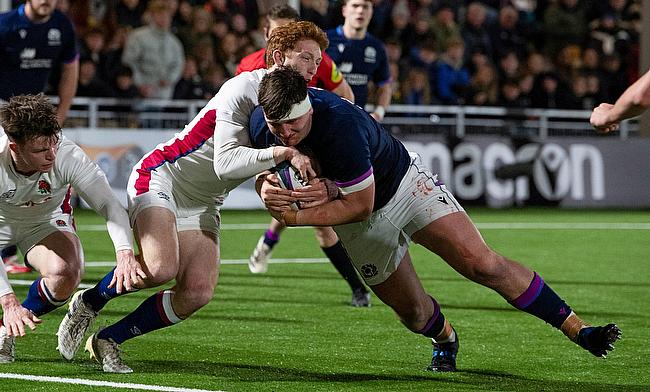 Highest Score in Six Nations history
Jones hoping England’s physicality will give them edge over Ireland
The Most Memorable Moments in Six Nations History
Exclusive: Gloucester’s Ruan Ackermann talks about his international ambition

Schoolboy Callum Norrie will soon have exams of the written kind coming up, but for now he is continuing to face up to tests on the rugby field with the Scotland under-20s.

On Friday evening, 18-year-old tighthead prop Norrie will look to make an impact when he comes off the bench in the Stadio Comunale Di Monigo in Treviso against what will be a physical Italy outfit.

It is round four of the age-grade Six Nations and the young Scots are still looking for their first win in this year’s competition.

Italy have lost two matches, but their win was a big one for them against England - 6-0 - in round two, so it shows how dangerous they can be.

Norrie is the only member of the matchday 23 who is still at school, but the Strathallan School pupil is learning all the time and has a big future ahead of him.

And he has not had to look far for inspiration over the last few years as he has transitioned from a second-row into a tighthead because current Scotland number three Zander Fagerson - a British & Irish Lion of course - went to the same school previously.

Fagerson, just 26, will be winning his 46th Scotland cap in Rome on Saturday while Ed Kalman, who earned two caps for the national team in 2012 and served Glasgow Warriors superbly for many years, is now a teacher at Strathallan.

When you throw into the mix the fact that the likes of Jamie Ritchie, Matt Fagerson, George Horne, Murray McCallum, Ollie Smith and others also have connections to the Forgandenny-based school then Norrie has plenty of good examples to look up to.

“Zander has been a real role model to me since I moved to tighthead and he is someone who I really look up to,” Norrie, who will earn his fourth age-grade cap in Treviso, told TRU.

“He has been very good at giving me advice and tips here and there and that has really helped. Even during this Six Nations I have bumped into him during our training camps at Oriam [on the outskirts of Edinburgh] and he is always happy to help me out which, as a young player, means a lot.

“It was definitely the right move for me [to move schools to Strathallan a few years ago] as I’ve been able to access a high level of rugby week in and week out while there are some great coaches at the school and I have been able to tap into their knowledge.

“At first when I was thinking about the calibre of players I’d be up against before the Six Nations age-grade tournament began the nerves were there, but as soon as you are on the pitch you have a job to do and like any game you have ever played there are two sets of posts and a rugby ball out there.

“The last few weeks have definitely been a challenge, but I have been learning the real technicalities of the tighthead position and I have taken on lots of knowledge and I am enjoying testing myself and being part of this team.”

Redditch to rowing to rugby

Norrie, whose dad is from Dundee and used to play for the Morgan club, was born in Redditch in England in January 2004 and his family moved to Strathkinness in Fife when he was four.

He attended Newport on Tay Primary School and his love of rugby began when he played mini/tag stuff at Dundee Eagles.

Norrie then played at Howe of Fife from the age of seven and, school-wise, went to Madras College in St Andrews for three years after primary.

As well as rugby keeping him busy, he was a member of St Andrews Rowing Club in Edinburgh and was Scottish indoor rowing champion for senior three age and also the club’s under-15 champion.

His rugby has come on a lot at Strathallan and he has played age-grade for Caledonia and for Scotland under-16s, but the current challenges he is facing is a step up from all of that.

“I am just really enjoying being in the under-20s environment and learning from everyone around me, it has been a great couple of months,” he said.

Gregor Hiddleston, Tim Brown and Ben Evans have been backed to make an impact after they were brought into the Scotland starting XV for the big under-20s game in Italy.

Hooker Patrick Harrison has a slight rib issue and is being rested, back-row Ollie Leatherbarrow has a facial injury and is out for the foreseeable future and winger Ollie Melville is unavailable due to university commitments.

Hiddleston, Brown and Evans have replaced them for the visitors and head coach Kenny Murray said:  “Gregor has done well from the bench and deserves a chance.

“Tim has been good, when he came on against France last time out I thought he did really well.

“He is a really hard worker and is a low tackler which should be an asset for us in Italy.

“Ben is a big, strong man. He is physical, he is quick and he has skill as he showed against France off the bench when he had a cracking run down the wing.”

Innes Hill and Keiran Clark could make their debuts at this level off the bench and Murray expects a “very tough game, Italy have played well so far in the competition”.