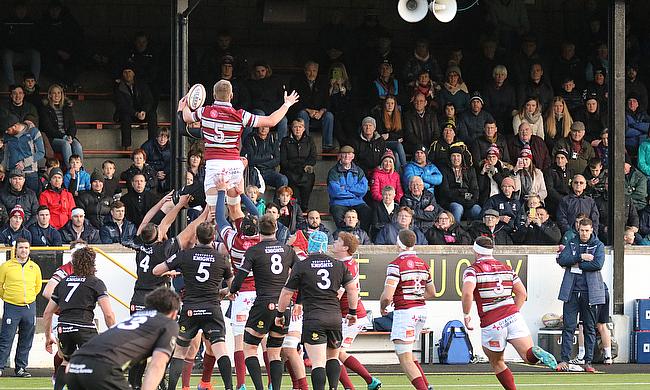 World Rugby fine Scottish Rugby Union £70,000 for World Cup comments
“We want the best young players to be challenged by the Super6”
Gibson loving life in Bahrain as his coaching journey begins
Super6 in Scotland on the horizon

After all the waiting, the new-look FOSROC Super6 league arrived in Scotland over the weekend with Boroughmuir Bears, the Southern Knights and the Ayrshire Bulls hosting matches.

Over the last 18 months or so, Super6 has been the ‘hot topic’ north of the border with the aim of the semi-pro league to create a new level between the amateur and professional game in Scotland.

A crowd of 1,521 watched the first ever Super6 match at Meggetland on Friday night as Stirling County edged out the Boroughmuir Bears 27-24 thanks to two late tries.

County’s stand-off Josh Henderson kicked the first points of the Super6 era when he stroked over a penalty in the sixth minute.

The first try of the match came in the 12th minute when Boroughmuir hooker George Shannon went over. Scrum-half Kyle McGhie converted.

The home side then lost a man to the sin bin in the 16th minute when winger Jordan Edmunds was yellow carded for a high tackle. County pressed while he was off, but their accuracy let them down and they were made to pay.

A couple of minutes after he returned to the field, Edmunds put a nice kick into the County ‘22’, gathered the ball and went over for a try. McGhie converted and it was 14-3.

The visitors knew they needed a try before half-time and it came in the 36th minute. A solid lineout drive saw skipper Reyner Kennedy bagging the score and when Henderson converted it was 14-10.

‘Muir scored their third try before the interval though, full-back Glen Faulds going over for the converted effort for 21-10.

It took 20 minutes of the second half for the next points to be scored, Henderson kicking a penalty for County

Five minutes later, a Faulds penalty made it 24-13 to Boroughmuir, but County scored a converted try in the 72nd minute through scrum-half Caleb Korteweg to keep the game alive.

With three minutes remaining they then scored another one through back-row Ollie Bartlett, Henderson converting to give the away team victory despite a late yellow card for No.8 Adam Ashe.

Watsonians head coach Fergus Pringle lauded his team's defensive efforts as they shut out the Southern Knights for large portions of the game before going on to score two late tries and win the match 14-13 at The Greenyards on Saturday.

“Our defence was outstanding, we only conceded one try and that was when we were down to 14 men, I think that defence won us the game,” Pringle said.

“When we were 13-0 down with three yellow cards [already in the bank] I wasn’t sure if we could go on and do it, but the boys really stuck in.”

The Knights were 13-0 up after 58 minutes, winger Michael Mvelase-Julyan scoring a try and stand-off Struan Hutchison kicking eight points.

Then came the Watsonians comeback.

The forwards started to carry with more purpose and in the 63rd minute a neat kick through by captain Lee Millar was collected by centre Joe Reynolds who scored. Millar converted for 13-7.

Six minutes late try, number two came after some strong phases when centre Lewis Berg burst through to score. Millar again converted to make it 14-13 and some strong defence in the last few minutes saw the visiting team home.

And Heriot’s forward pack put in a strong display to help them defeat the Ayrshire Bulls 25-13 at Millbrae on Sunday.

In front of a healthy crowd of 1,341, the Bulls took the lead in the fifth minute thanks to a penalty from stand-off Frazier Climo.

However, they then had back-row Graham Geldenhuys yellow carded in the 14th minute and the visitors took advantage.

They scored a try from close range through No.8 Jason Hill and when full-back Ross Jones converted, it was 7-3.

A big thank you to everyone who came along to the first weekend of #FOSROCSuper6 to make it a success. ??

Attendance across the three games: 3?,9?3?8?! pic.twitter.com/bCpCgywzad

That was in the 19th minute, but before Geldenhuys returned to the field the 14-man Bulls managed to score their first try.

Centre Tyler Beary intercepted a pass from Heriot’s back-row Jack McClean and raced in under the posts with Climo converting to make it 10-7.

A Jones penalty levelled things up in the 27th minute before Heriot’s bagged their second try.

It came from second-row Ronan Seydak and then Climo kicked a second penalty for the Bulls to leave the visitors 15-13 ahead.

Just before the break Heriot’s second-row Adam Sinclair was yellow carded for a high tackle.

With a man less, the Edinburgh side’s forward power helped them to be awarded a penalty try in the 47th minute and to add to the Bulls woes replacement Lars Morrice was yellow carded.

Late on Bulls replacement David Armstrong and Heriot’s centre Cameron Hutchison were yellow carded while the visitors added a penalty through Jones and held on for a hard fought four points.

The second round of fixtures in the new-look competition takes place this coming Saturday and Sunday.