Gibson loving life in Bahrain as his coaching journey begins 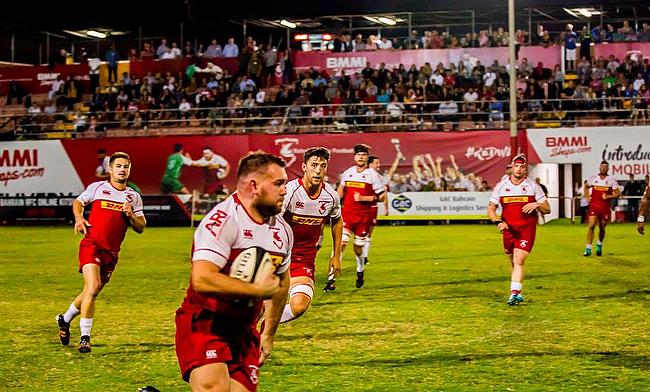 Gibson is loving his time with Bahrain
©Bahrain Rugby

As a teenager Lindsey Gibson played in the same team as Stuart Hogg in their hometown of Hawick.

And while their rugby journeys may have taken them in very different directions since then, the good mates still keep in touch.

Gibson, now 29, has been delighted to hear how Scotland full-back Hogg, 27, has been settling in quickly with the Exeter Chiefs over the last couple of weeks and the latter has enjoyed hearing about how the former is getting on as an assistant coach at West Asia Premiership outfit Bahrain Rugby Club.

“Myself and Hoggy are good mates, he joined the Hawick Wanderers under-18s when I was in my last year and we have stayed in touch ever since then and meet up whenever we can,” Gibson, who as well as coaching is still playing as a hooker and captaining Bahrain RFC, told TRU.

“I also played with Stuart McInally and Grant Gilchrist at Scotland under-20s level and thankfully Stuart played No.8 then or maybe I wouldn't have made the squad at that time!”

Gibson started his rugby in Hawick playing for Hawick High School and Hawick Albion and then he moved onto Hawick Wanderers.

At the age of 16, he moved to hooker from back-row and soon went on to play for Scotland under-17s and the Hawick first team.

He represented Scotland under-20s, the Scotland Club XV and the South of Scotland.

“I have had some high points in my career, I won promotion with Hawick after the play-off match victory 39-38 against Dundee HSFP in 2013 and I won the Melbourne Premiership in 2016 with the Melbourne Unicorns, winning the final 20-19 having been 19-6 down at half-time,” he stated.

“The Hawick match probably edges it as my top memory as I was playing with all my best mates.”

Hawick to Bahrain via Australia

So, how did the player end up in Bahrain?

Bit earlier in my career than I expected to start coaching but buzzing with the opportunity and excited for the new season! #yeahtheboys https://t.co/IZCaqbs2Hm

He spent three months playing for Bahrain RFC in 2015 before playing in Melbourne, Australia, Then, realising he enjoyed life in Bahrain so much, he returned in 2016 and has been there ever since.

“Bahrain is quite a unique place, but early on in my time here I was shocked at the number of expats out here and how similar most things were to back home, not what I was expecting,” he said.

“The rugby club itself is brilliant, it is a real social hub in the area.

“The people at the club have been amazing, they really do look after you once you are part of things here and it is the little things that make a difference when they looked after my parents when they came to visit.

“The standard of rugby in the region is good and probably similar to the mid table/bottom end of the Premiership in Scotland. The standard of the Bahrain team has grown massively - and we have gone from one of the whipping boys in the league to one of the top teams.

“Winning the Cup in 2018 as stand-in captain was amazing, but winning the league and Cup double in 2018/19 with my parents over here watching has to be the highlight of my time with the club so far.”

After the 2018/19 double, head coach Louie Tonkin, a Welshman, departed the club to take up a role with the Exeter Chiefs Academy.

Adam Wallace, a well-known player in the region and previous assistant to Tonkin, was given the head coaching role going into 2019/20, and he appointed Gibson as his right-hand man.

“The club decided the best route [when Tonkin left] was to keep thing in- house with our captain Adam stepping back from playing and moving up to being head coach with me fulfilling the assistant coach role,” Gibson explained.

“We are only just starting out with it all, but we have a great bunch of boys here and they are easy enough to work with. It’s quite exciting adding your own ideas in to see if they work or if they don't, you certainly live and learn as a coach.

“It will be a tough ask, but we have got to be looking to defend our title and I still love playing as well as coaching, hopefully at my age I still have a few more years left in the tank on the pitch.”

After three league matches to date this term Bahrain RFC are second in the West Asia Premiership table with two wins and a loss to date.