Springbok Sensation set to light up 2015 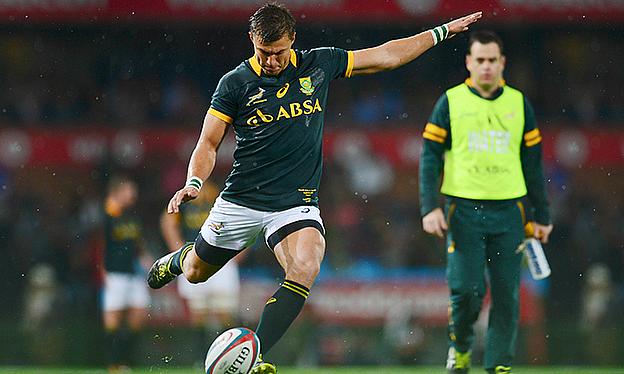 We have yet to see the best of this talented, young fly-half
©TRU

Gori becoming the heartbeat of the Azzurri
SOS - Save Our Springboks!
World Cup race for De Villiers
Five changes for the Boks

The fly half is undoubtedly one of the most important positions on the field. The fly half is the playmaker; the one who steers a team around the park, and more often than not is the man the team turns to in times of need.

Rugby biggest stage piles even more pressure on then number 10 shirt of any team, and under this immense pressure many fly halves have cemented their names in rugby legend. Grant Fox, Michael Lynagh, Jonny Wilkinson, these are players who proved themselves to be the best when the World Cup came around.

In these articles I will hope to pick out some young players for whom the 2015 Rugby World Cup could be their chance to stamp their authority on the game and secure their place in their national side’s starting line-ups. This week it is fly halves, and at a time when many young fly halves are making a name for themselves there is one who stands out head and shoulders above the rest as a youngster destined for super star status.


The Springboks are one of the leading forces in world rugby. Currently sitting second in the World Rugby rankings the strength of the Boks historically has been built on physicality upfront and a maestro at ten running the show.

Pollard, at just 20 is quickly building a reputation as the next South African magician to wear the iconic green jersey and it quickly becoming a household name.

The young South African first burst onto the scene represented in three  successive Junior World Cups, claiming the trophy once, and being name captain and winning IRB Junior Player of the year in 2014.

Few players have made such an impression in such a short amount of time. Weeks after winning the Junior World Player of the year award Pollard he was named to start against defending World Champions, the All Blacks, at fly half.

With only three senior caps under his belt, being named to start at ten, selected over the likes of Morne Steyn and Pat Lambie, you could forgive Pollard if he was to have a quiet game.

You can imagine the likes of Richie McCaw, Jerome Kaino and Kieran Read would have been licking their lips at the prospect of giving the young starlet a proper welcome to international rugby.

What came next was an incredible display; the young fly half steering South Africa to a famous 27 – 25 win. Two tries, three conversion and a penalty saw Pollard claim 19 points that day and be touted as the hero of the Springboks, a true coming of age of a player who promised so much in the youth set ups proving his worth on the international scene.

And it seems this form was not just a flash in the pan. Time and time again in rugby we see ‘the next best thing’ come up through the ranks showing such promise disappear with their tail between their legs. Not Pollard.

65 Points for the Boks in nine games and a regular for the Bulls, his last outing saw him secure 29 points as he helped the Bulls to a 29 – 20 win over the Cheetahs. At 6”2’ and 15 stone he always had the physical attributes and it appears he also has the mental strength to take international rugby, Super Rugby, super stardom and the nations expectations in his stride.

Springbok head coach, Heyneke Meyer, time and time again has sung his praises and the South African press have dubbed him the ‘messiah’ of the Springboks.

The Springboks have, compared to some of the other England 2015 pools, a relatively easy route to the knock outs. Drawn against Samoa, Japan, Scotland and the USA they are clear favourites to progress.

If expectations are met they are then likely to meet Argentina in the quarters before what will be the clash of the tournament, a semi-final show down with the All Blacks.

The way selection has been going it look as though Pollard will be the man charged with steering the beefy Boks pack around the park before releasing their back line and kicking the points. He is the man Meyer will turn to to start at ten for the tournament, a big ask of a man of 21.

But despite his tender age, Pollard has already shown he has the physical, and mental attributes to become a legend of the game. He is quickly becoming the poster boy of the Springboks side, but to book his place in the annuals of rugby history, the 2015 World Cup is the time for him to up his game and prove he is more than a young pretender and go all the way to show he is truly, world class.