Gori becoming the heartbeat of the Azzurri 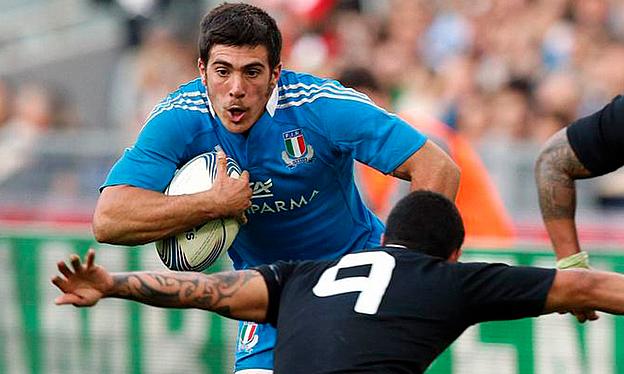 Italy have a world class scrum-half in Edoardo Gori
©PA

As we enter a World Cup year Mike Stanton continues to look at some of the best young players that could feature at the 2015 Rugby World Cup: Edoardo Gori

The 2015 Rugby World is getting ever closer, with now less than 200 days to go. The World Cup is a unique opportunity, despite rugby’s ever growing popularity it rarely attracts a global audience. The World Cup, as in all sport, is a time where the world’s sporting attention and imagination descends on rugby, creating electric atmospheres and chances for players to become legendary names in sport.

As attentions turn to rugby there is an exciting opportunity for young players to grab their international futures by the scruff of the neck and make a serious claim to be the number one in their position. Injuries, gambles and the intense nature of the World Cup means younger, sometimes squad players, are thrown into the mix and given an opportunity to show what they have on rugby’s biggest stage.

Italy registered a heroic win last weekend. Their 22 – 19 win over Scotland was their first in the 2015 RBS 6 Nations and only their second win away from home in the competition.

A look over the score sheet shows it was the Italian pack that won the game. Second row Josh Furno crashed over after nine minutes and the last play of the game saw a match-winning penalty try win the Azzurri the game from a driving maul. The Italian pack has always been the heart of the side; however it was the number nine Edoardo Gori who provides the heart beat and it was him that drove the Italians on to their famous victory at Murryfield.

At 24 Gori has already become a fixture in the Italian side and his form in this year’s 6 Nations is further evidence of his talent. It is also worth noting despite Italy’s struggles at fly half Gori has still shone.

Despite being paired with different fly halves for each run of games, meaning no chance to build a real relationship and continuity, Gori has kept Italy moving forward.

The 9/10 partnership is crucial to a side’s progress and performance. They are the brains of the side and the two players that can change games on thier own; a look at Jonathon Sexton and Connor Murray’s display against England is testament to that as between the two of them they masterminded a clinical dismantling of the England side.

If either of the halfbacks are off the pace a team can fall apart. The forwards in front of them lose trust and keep it tight and the backs outside them get frustrated. However, despite the ten shirt being a problem area for Italy, Gori’s talent has kept them on course and as a result despite them lacking in the fly half department the caliber of their nine has kept them on the straight and narrow.

Italy are building a spine to their team; with the likes of Furno, Gori and Simone Favaro, that can challenge the big sides in World Rugby, this 6 Nations saw them take the advantage early on versus England, running in two tries, and their last outing saw them go one further by beating Scotland; putting to bed any questions about their place in the competition.

Much has been made in the media, and rightly so, about George North becoming the youngest player in rugby history to win 50 caps. But at 24, just two years his senior, and making his international debut the same year as North, Gori already has 40 caps to his name, a remarkable achievement considering the Italian calendar is much less congested than that of the Welsh and without the possibility of Lions caps.

The young scrum half has been in fine form of late. He provides control and tempo both for his country and for Bennetton Treviso, who he plays for at club level. He had a major role in Treviso’s historic 23 – 20 European Champions Cup win over Osperys in Round 6, the Italian side’s first win in Europe’s top tier in two years.

He is quickly becoming a central character in an Italian side with big ambitions. The scrum half is one of the most important positions on the field, providing a link between the forwards and backs and driving a team forward with skill and vision.

Gori is following in the footsteps of Alessandro Troncon, the legendary Italian scrum half who went on to amass 101 caps for his country and become known throughout World Rugby as one of the greats.

Gori has announced his presence on the 6 Nations scene over the past few years, building a strong reputation for himself within Europe. However, the 2015 Rugby World Cup is an opportunity for him to show his talent on the global stage. He featured in the 2011 World Cup, making one appearance. This time round he is no longer the understudy but the lead in the Italian World Cup story.

Captain fantastic of Italy Sergio Parisse is a legend in the game, as is Martin Castrogiovanni. 2015 is a chance for Gori to pen his name in rugby history alongside these greats as an Italian rugby player revered world wide.

And, with Italy drawn alongside Ireland, France, Canada and Romania he could be in the driving seat of an Italian side that could take a scalp or two if they are at their best when the World Cup rolls into town.