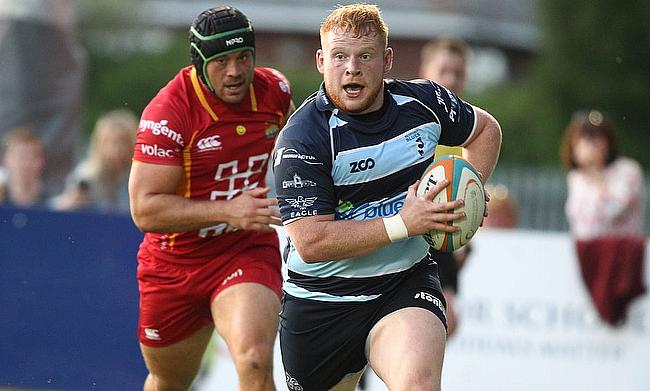 Former Scotland under-20 captain Robbie Smith has never been afraid of putting in the hard yards during his fledgling career - and, as such, he had no qualms about moving 350 miles south from his Glasgow base in the summer in the search of more game time.

Since he arrived at Bedford Blues, he has been a regular starter for them in the Greene King IPA Championship during the opening weeks of the season and is looking forward to the prospect of taking on early pacesetters Newcastle Falcons this coming weekend.

“To play against a side like Newcastle who have players like [Ireland cap] Rodney Ah You in their front-row, Scottish players in their ranks like Gary Graham and experience behind the scrum led by Toby Flood as well as guys from the World Cup likely to come back, it is the kind of test any player wants,” Smith told TRU.

“They are obviously a very strong squad and are favourites for promotion, but at home we feel that we can give every team we come up against a real game and with the match being on TV [it is live on Sky Sports Arena] it just makes it even more exciting.

“We have won one of our first four games and are 10th in the table, but we have been in games that we have lost up to the 70th minute mark or so and with a lot of young guys in the squad who are learning all of the time at this level, we know that we can compete in this league and we are all enjoying working hard as a group."

Good luck to Fosroc Scottish Rugby Academy Hooker Robbie Smith who has signed for @BedfordBluesRFC ahead of the 2019/20 season. https://t.co/pvQbAuL27j

Learning from Rayer, Rae and Tupai

For any up-and-coming player making their way in the game, they want to be at a club who are well coached.

Certainly the coaching team at Bedford has plenty of experience, being led by Director of Rugby Mike Rayer who won 21 caps for Wales between 1991 and 1994 and also represented the Barbarians.

Head Coach/Forwards Coach Alex Rae knows the Championship inside out having played for distinction for Bedford and Jersey Reds amongst others during his playing days as a second-row while Assistant Coach Paul Tupai is a legend around the club having played over 250 games in the back-row. Backs Coach Paul Larkin completes the set-up.

“The coaches we have at Bedford have been brilliant for me,” Smith explained.

“They are very clear about what they are looking for both us as individuals and as a unit and they have created a superb environment here. Alex Rae and Paul Tupai played at this level in the pack a lot and know what they are after while they are keen to help us all get better.

“Everyone is a bit nervous coming into a new squad and new surroundings and I was no different, but the coaches and the more experienced players that were already here made me feel at home straight away.

“I am sharing a flat with fellow front-rower Henry Paul [who joined in the summer from Esher] which has been good and with the Championship being quite a forward-based and physical league we have been enjoying the challenge at training and on the pitch.

“I have been putting in the hard yards to nail down my set piece skills and it is brilliant playing for a club like Bedford because people in the area love rugby and are often coming up to me to chat about the team. That makes you feel like you are connected to the supporters and makes me more determined to help us climb up the table in the coming weeks.”

The tough decision to leave Scotland

A 21-year-old hooker, Smith made his debut for Glasgow Warriors against the Ospreys in January this year, but with full internationalists like Fraser Brown, George Turner and the recently capped Grant Stewart ahead of him in the number two shirt queue heading into 2019/20 at Scotstoun, he had a decision to make.

“During 2017/18 and last season I was in the Scottish Rugby Academy and was training with the Warriors quite a lot,” he stated.

“That was brilliant and I can’t speak highly enough about coaches Dave Rennie and Jonathan Humphreys [now with Wales] as well as all the experienced hookers there and guys like Jonny Gray and Rob Harley.

“They all really helped me and Jonny and Rob, despite having Scotland caps, would take time out after training to help me with technical things, they really are top boys.

???TRYLIGHTS??? Check out the three scores from yesterday's Championship clash with Doncaster Knights. Another for @RobbieSmith12 plus a @RichLane1 ?????? special. See you next week for Blues v @FalconsRugby at Goldington Road #COYB pic.twitter.com/RAW6B6MIie

“It was great to get some game time for the Warriors last year and I was 24th man quite a lot when Fraser and George were injured, but as the end of the season approached, I sat down with Head Coach Dave and he was very honest with me.

“He said that chances in the first team might be limited for me this term and he felt that regular game time somewhere else would be good for me at this stage of my career.

“I was obviously disappointed because I wanted to breakthrough at Glasgow like I had seem my flatmate Stafford [McDowall] doing, but I chatted things through with my family, got my head around things and when the chance came up to move to Bedford I jumped at the chance.”

Smith started his rugby career at local club Newton Stewart before moving to Ayr in his late teens.

“It was a bit of a trek from Newton Stewart to Ayr and back, especially as I was still in my fifth year at school when I joined, so it was a huge commitment for me and my family,” the man who eventually earned 16 caps at under-20 international level recounts.

“My dad used to drive me up to training twice a week which was a three hour round trip for us so I owe a lot to him and he has really helped me get to the level I am at now, in fact he was at Bedford’s game at Doncaster last weekend so doesn’t mind clocking up the miles!

“At Ayr, Callum Forrester [then the first XV Head Coach] really pushed me forward and gave me a chance to start and get game time at a high club level when I was quite young.

“I was disappointing at times in my first year in the Scotland under-20s [2016/17] because I wasn’t getting to much game time, but looking back I can see that it was a really good experience for me.

“There were a lot of really experienced players - like Callum Hunter-Hill [now at Saracens] - who had been involved in pro rugby at the time, so being in that environment was really valuable.

“The World Cup in Georgia that year was just unreal. It really did motivate me to think about what I needed to do to make rugby my career.

“I worked hard in the gym on my strength and my fitness and to captain the under-20s in 2018 and beat England in the age-grade Six Nations is still the highlight of my career.”