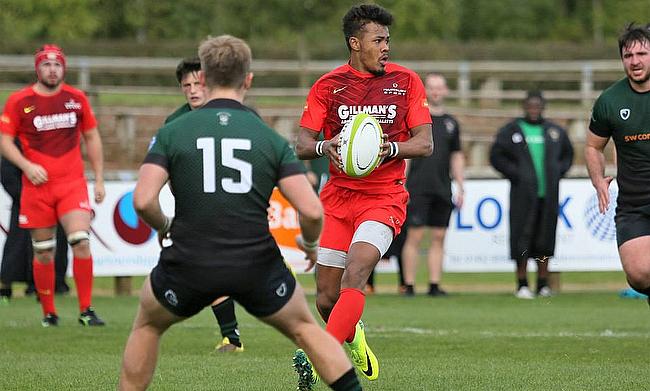 "I honestly can’t say enough about Hartpury, the coaches, the players, the support staff, it’s like no other place," says wing Maliq Holden.

“The environment is what makes it so special. It’s no surprise how many great players have come through and will continue to. The fact that you know that there is always two or three lads constantly battling for a shirt every week, brings out the best of the lads.”

Holden moved to Championship club Cornish Pirates, having won consecutive BUCS Super Rugby titles at the renowned Hartpury University, Holden admits that the success that he experienced in BUCS gives him motivation going forward with Cornish.

“Even though winning those titles are probably the best days I’ve had so far in my career, I think what gives me confidence is that I want to achieve bigger and better things and continue to be a part of more big days like those two.”

Opening up on his decision to play for Cornish, Holden says that he was trying to push himself out of his comfort zone by moving down to Cornwall: “Having spent five years at Hartpury and living the life of a student, moving down to Cornwall and being a long way from family and friends was the challenge I thought could get the most out of me.”

Currently fifth in the Championship table, Cornish are just one point behind fourth placed Bedford Blues. Pirates started the season in impressive fashion, heading up the table for several weeks before London Irish took the league by the scruff of the neck.

“After beating Exeter Chiefs in preseason, we then went on to win five games with five bonus points and then lost a few games here and there. We struggled a bit when Chris Judge went on loan to Sarries, but I think we worked hard in training and worked our way back with a big win against Irish [in the Championship Cup just before Christmas.]

Moving to Holland at the age of 12, Holden began to play rugby soon after. Born in Liverpool, Holden’s primary sport was football, even playing for Liverpool FC’s academy side for a time. Flourishing at the British School in the Netherlands, Holden ended up playing age grade rugby for Holland.

Now plying his trade in English rugby’s second division, Holden uses his late start in rugby as motivation to succeed: “I used it as a bit of a chip on my shoulder to motivate myself. It was never an excuse, more an incentive to work hard and, back then, just to try catching up to the level of my mates in the team.

The first of our alumni shirts are hanging on the wall in the PE corridor. Thank you to @maliq_holden and Maarten for the donations of their shirts. More to come in the next few weeks #BSNAlumni #inspirationalstudents pic.twitter.com/pI22SlOQFj

“I honestly didn’t think that I would be in this situation, or place, when I was younger. I’ve always wanted to get better all the time and I’ll see where I end up. Being part of finals and winning things, along with playing at the highest level I can be is an aim for me.”

Aided in his transition to the Championship by two other ex-Hartpury players, Holden admits that he hasn’t played as much as he would have liked, but is optimistic for the season ahead: “It’s been a bit up and down to be honest, a few little knocks and not having played as much as I would have liked. “But, I’m loving being down here and feel like I’ve developed myself and just really excited for the next few months.

“After that Irish win, we know what the team is capable of and we can beat anybody. If we can play to those standards, I don’t see how we can’t finish in the top three or four.”