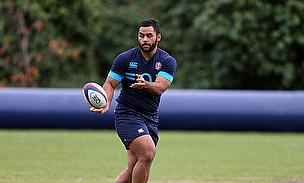 Six Nations 2015 is here and for those playing fantasy rugby games, it is difficult to know which players to select. Fortunately help is at hand from our man Scott Donaldson.

Here is his guide to help the likes of @emmathurston23 and @rugbymedia - both are established and valued contributors to www.talkingrugbyunion.co.uk

We have already polled some of our regular contributors to test them on how they thought Stuart Lancaster would select. It did prove difficult with so many injuries!!

So it's over to our tipping pundit in the Southern Hemisphere for guidance, with less than 12 hours before the tournament kicks off.

In Six Nations 2015, it is important to select starting players. England for example, have so many injuries that you have to keeping checking that the teamsheet hasn't changed.

In Six Nations Round 1, it will be interesting to see what happens with all of the Number 10s. Because of the injuries to established players like Jonny Sexton and Owen Farrell, managers will have to take a gamble in the inside backs especially knowing who will be the best goal kickers.

It usually pays to invest in some studs first and then fill in the usual lower scoring positions of lock and midfield back with cheaper options.

Looking long-term will save trades, but that is difficult especially if you are an England fan, with so many injuries!

Finally, the best way to choose players is based on their opponents. Outside backs are far more likely to score tries against Italy than against the stronger teams. Day games are also better for scoring tries. Italy does have some great tacklers who earn big fantasy points despite the team not winning many games.

The best way to choose your Six Nations fantasy rugby squad is to look at the best performers from 2014.

In my team I have gone for some consistent performers like Rory Best, Sergio Parisse, Billy Vunipola, Wes Fofana and Jamie Roberts, but there are heaps of bargains out there because of injuries.

At first five eighth it could be worth taking a punt on George Ford, Camille Lopez or Ian Keatley.

A goalkicking outside back like Leigh Halfpenny should be a reliable points scorer.

Check out the performers from the 6 Nations 2014 series, and see who showed out proud! Presented as the best Rugby 15 of the series and best possible Fantasy side of the series.

This squad is picked based entirely on TESTRUGBY.com fantasy points earned from the Series. The results are limited to the actual starting 15 of each side, and spots are based on the jersey number worn in the game. A player must have played in their jersey number at least twice to be considered.

Republished with permission www.testrugby.com and @superrugbytips