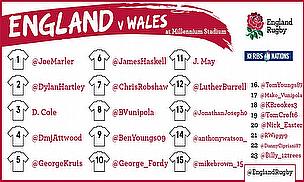 England have named Danny Cipriani and Nick Easter on the bench for Friday night's RBS 6 Nations opener against Wales in Cardiff.

Cipriani provides fly-half cover for George Ford while Easter, more traditionally a number eight, has been asked to deputise for the second row with his experience deemed invaluable for the Millennium Stadium showdown.

A new centre partnership is formed by Jonathan Joseph and Luther Burrell and Dan Cole returns at tighthead prop having recovered from a foot problem in his first Test appearance for almost a year.

"Jonathan has been one of the form centres in the country. He and Luther have trained well together and this is a big opportunity for both of them," head coach Stuart Lancaster said.

England's injury crisis means there are only nine survivors from the starting XV that toppled Australia in the climax to the autumn and just five from the 30-3 rout in Cardiff two years ago.

Cole features in the front row as a replacement for David Wilson, who has a neck problem, and is one of four British and Irish Lions returning to the 23 alongside Tom Youngs, Mako Vunipola and Tom Croft, who have been picked on the bench.

Joe Marler continues at loosehead as his reward for a strong year for England while Dylan Hartley has held off the challenge of Tom Youngs, despite his recurring lapses in discipline that now total 50 weeks in suspensions.

The injury crisis has hit hardest in the second row where Dave Attwood now operates as the senior lock in tandem with rookie George Kruis, who has not played for three weeks after being banned for a dangerous tackle.

The new centre pairing of Joseph and Burrell are the only adjustments to the backline that faced down the Wallabies in November with Ford and Ben Youngs continuing at half-back.

Billy Twelvetrees has beaten Jack Nowell to the final available spot among the replacements.

England, mindful of having been caught in the headlights at the Millennium Stadium in 2012, have adopted a policy of packing the 23 with as much experience as is available to them.

"We've had to make some tight calls but we are excited about the side selected for what will be big challenge," Lancaster said.

"Billy Vunipola has been playing well for Saracens and it's good to be able to give George Kruis his first international start after his impressive run off the bench in November.

"Dan Cole and James Haskell bring a lot of experience, as do the bench, and their contribution will be crucial on Friday night."

It is the presence of Cipriani and Easter among the replacements that provides the biggest talking point with the duo having encountered moments of controversy during their Test careers.

Cipriani, who made two replacement appearances during the summer tour to New Zealand, benefits from Owen Farrell's Championship-ending knee injury and has been preferred ahead of Stephen Myler to cover for Ford.

Easter won the last of his 47 caps at the 2011 World Cup but has been ignored by Lancaster until his recent return to the fold, rewarded for his magnificent form for Harlequins.

England have been training at their Pennyhill Park base with hymns playing over the loudspeakers to emulate the atmosphere awaiting at the Millennium Stadium.

"It's a way of trying to replicate for the players who haven't been there examples of sounds they'll hear around the stadium, but also how clear your communication needs to be," Lancaster said.

"We've not done it all week because we don't have the eardrums for that."

The Millennium Stadium roof is almost certain to remain open. Wales head coach Warren Gatland has already stated he wants it closed, but it is England who will determine what happens.

"We have a decision to make by the end of the day but with the conditions set fair, we'll probably want it open," Lancaster said.

An experienced Wales team is populated by British and Irish Lions, but Lancaster is happy with the 23 he has selected for Friday night.

"If you go through the pack there are a lot of guys who were unavailable in the autumn who have come back into the equation," Lancaster said.

"Dan Cole has been great in training. He's such an experienced player. When you go to Cardiff, experience counts and that tipped the decision in his favour.

"We have less experience in the backs, but certainly lots of exciting talent. We have a really good balance across the board."