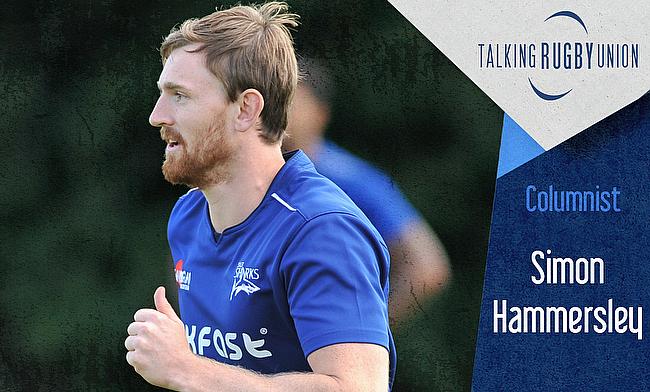 Why Newcastle's wingers showcased their abilities against Bath
Match Report: Gallagher Premiership: Sale Sharks 32-23 Northampton Saints
WATCH - Hammersley: It would be great to get silverware for the club
Simon Hammersley Column: Argentina game will be benchmark for England

In his latest column for TRU, Simon Hammersley discusses Sale Sharks’ bonus-point victory against Northampton Saints, moving on from last season’s disappointment and returning to his old stomping ground.

Getting a bonus-point win is the best you can do in a Premiership game so I think from that aspect, we were thrilled with last week's win. As for the performance, we thought we were clinical when we got our opportunities, but we probably let them into the game too much by giving away quite a lot of penalties. Our kicking game wasn’t up to our usual standard so there was a bit of frustration and there are a few things to work on, but overall, the result was very good to start the season.

Déjà vu against the Saints but new experience on the wing

I suppose it was the same as last year when I opened the season against them! It was nice to score again!

I have been playing the last few games on the wing which is a bit different for me because I have only really played full-back in the professional set-up, but I have been enjoying it.

It has presented different challenges for me during the week and in training, so I have had to look at the game differently.

I have had to study things a bit more and work on where I am needed in different circumstances but overall, I have enjoyed getting to learn a new position and hopefully I have done a reasonable job for the team out there.

It was obviously a disappointing way to end last season, but we knew going into last week’s game that we could only focus on Northampton. What has gone on is in the past and it was about us getting a new season off to a good start.

It does seem weird that a new season has started only a matter of weeks after the old one, but it is exactly that. It is a new season. It was a fresh start against a good Northampton team who came up and I thought played pretty well. When we didn’t make our mistakes or give away the penalties, I thought we looked comfortable and really put down a marker to start the season well.

We don’t want to dwell on what happened because it was kind of out of our hands, but we felt like if we had played that last game against Worcester, we would have hopefully managed to get the win and we would have been in the top four. We feel like we deserved to be at the top end of the table and competing for the top four so this season, that is the aim and we feel like we are close to being up there.

We just need to keep working on all different facets of our game and hopefully, we will be in the mix come the end of the season, but that is a long time away!

Back on the Tyne

I am looking forward to returning to Newcastle! The more you play at Kingston Park, the more you learn about the wind, the cold and the intricacies of the stadium! It is brilliant that they have come back up to the Premiership and obviously they got a win last week so we know it is going to be a very tough challenge against a newly promoted side in their first game at home.

Newcastle Falcons full-back Simon Hammersley has joined Sale Sharks after exercising a relegation release clause. Thanks for your contribution to the club, Hammers, and all the best for the move https://t.co/QLks7CTx45 pic.twitter.com/gU9ilj8uAL

When I was at Newcastle and they got relegated, that was one of the big disappointments that the North-East wasn’t going to have a team representing them in the Premiership. The fanbase there when we played those games at St James’ Park showed that there was that real appetite for rugby in the North-East so in that sense, it is great to have them in the competition and also to have two northern teams playing against each other.

I’ve obviously played a fair amount of times for Newcastle against Sale and those games always had a bit of added impetus!

Reuniting with friends but aiming for the win

Before and after the Bath game, I was messaging a few of the Newcastle boys and everything will be light-hearted in the lead up to Friday night! They are excited to get out at Kingston Park. If you look at the guys who were on the fringes when I was there, your likes of Ben Stevenson (fellow Durham graduate) and Adam Radwan, they were really good players when I was there and they have really kicked on since then so it is great to see guys like that coming through into the team. They looked dangerous against Bath so it will be a tough ask on those wings on Friday night!

We are going to go there with confidence ourselves, but knowing that it will be a strong Newcastle team which we will be playing so I am looking forward to it and hopefully we can get another win.

The return of supporters

It will obviously be huge both financially for the clubs and the RFU to have that added revenue, but also, hopefully, there can be a bit more participation at grassroots level. It is crucial to get people out, watching and supporting rugby as well as playing it so I think any sort of steps to improve that – which it looks like the Government are making - is brilliant for the sport.