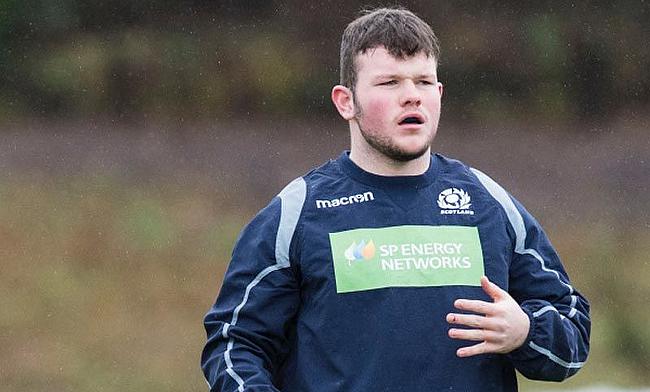 England U20s boss Bates: Players will want to 'dish out payback' against Ireland
Tom can Marshall the troops and be a key man for Scotland in Argentina
We want to make our own legacy - Sleightholme
You get a ‘winning mentality' in both camps

Ewan Ashman has put in the hard yards in recent years to make a successful switch from back-row to hooker - and now the Sale Sharks man is preparing for his toughest test to date against New Zealand under-20s this weekend.

The 19-year-old, who is a product of Sandbach RUFC, is currently in Rosario, Argentina with Scotland’s under-20s taking part in the World Championship.

Carl Hogg’s men kept pace with South Africa for 60 plus minutes in the Pool C opener on Tuesday before three late tries saw the Baby Boks home to a 43-19 victory.

And now they have to dust themselves down and prepare for the second pool game on Saturday against a Baby Blacks side that swept aside Georgia 45-13 in Santa Fe in their opener.

However, Ashman and co are up for the challenge and the man with six under-20s caps to his name has been looking back on his own rugby journey.

U20s Highlights: Take a look at this high scoring opening match as South Africa beat Scotland 43-19 on match day one at the #WorldRugbyU20s pic.twitter.com/1CtmDS9Sgg

“I started playing rugby when I was really young. I was five when I first went down to my local club Sandbach in Cheshire for fun,” Ashman told TRU.

“When I was about 10, we started playing contact stuff and I continued through the age-grades there while I also played at Sandbach School.

“I then got into the Cheshire country team at under-13, 14, 15 and 16 level and, from there, got involved in the Scottish Exiles stuff.

“I first played for Scotland at under-16 level and it was a big moment for me - my dad is from Edinburgh; he is a very proud Scot!

“To represent my country was something I always wanted to do. At the start of each season I set myself goals and if you had told me at the start of that season that I would be playing for Scotland I might not have believed you, but I worked hard and it was an amazing feeling.

“I was buzzing and we played in a tournament in Colwyn Bay in Wales. That was the first time that I met a lot of this current under-20s squad so we have all been good mates for quite a few years now.

“That exposure and then playing for Scotland under-17s as well as the Sandbach senior team when I was quite young helped get me noticed by Sale Sharks.

BREAKING | Here is your Scotland U20 squad to compete in the upcoming World Rugby U20 Championship in Argentina! #AsOne pic.twitter.com/97Sz4yOpNj

“I played an under-17 game for Sale against Connacht and did quite well and then I played a full season for them in the under-18 Premiership.

“I was then added to the Senior Academy and have just finished my first season in that set-up.

“I am now in the midst of a five-year contract with Sale, I have another year in the Senior Academy to go and then, all being well, will turn fully pro.”

Now used to wearing number two on his back, it could have been so different for Ashman.

“At school and with Sandbach I used to play back-row or even centre sometimes, but come that Scotland under-16 trip, I was switched to hooker and haven’t really looked back since,” he explained about the migration towards the front-row.

“It was a difficult transition to make to move to hooker at first, but when I got into that Scotland under-16 squad and then a bit further down the line with Sale Sharks I started working with coaches really hard on the technicalities of the position.

“I started to do a lot of extras and spent hours after training throwing the ball at the posts and stuff and I really enjoy the position now, but I know that I am still learning as I go.

“Sale players Rob Webber and Scot Byron McGuigan have been involved with coaching at Sandbach and Rob has been really good at helping me out during the move to hooker while Byron has been really keen to see me progressing with Scotland under-20s and is always there if I want to chat with him.

Definitely not a pretty win, but an important one. Also good to have another @SandbachRUFC scrapper in the match squad today. Well done @EwanAshman2. Coach and player to player and player ?? #B4L

“Along with Rob, Neil Briggs who is at Sale and Scott Lawson, the Scotland under-20s forwards coach, have really helped me out.”

“It has been great to see the way that Ewan has taken to hooker,” Webber,” told TRU.

“The position is not for everyone, but he has been keen to learn about the technical side of the position and he is quite a powerful and explosive boy.

“He still has a lot of learning to do, but it has been great to see a Sandbach boy make the strides he has and hopefully he has a long career ahead of him with Sale and Scotland.”

Ashman got close to a first XV debut at Sale a couple of months ago and is looking forward to 2019/20 there.

“It is a really good place to be,” the Canadian-born player said. “I was on the bench for the first team against Bath at the end of April, but never got on because it was a really tight match [Sale won 6-3].

“It showed me that I am not too far away and hopefully next year I can kick on and maybe get on the pitch for the first team.

“For now though, I am loving the Scotland under-20s environment, we have been reflecting on Tuesday’s loss against South Africa and we really believe we could have won the game.

“At the 60-minute mark we were only three points down [22-19] and Hoggy has said that we must take heart from that because we caused South Africa some issues.

“We have to make smarter decisions and learn how to close out games. We just have to push on to New Zealand now and head into that one with all guns blazing.”

And if the young Scots can cause a shock no one would be prouder than dad Jonathan Ashman.

“I think Dad would have cut off his right arm a few years ago if he knew it would mean I would play for Scotland,” Ashman junior joked.

“So, to have him out here in Argentina with my mum watching is brilliant.”