England U20s boss Bates: Players will want to 'dish out payback' against Ireland 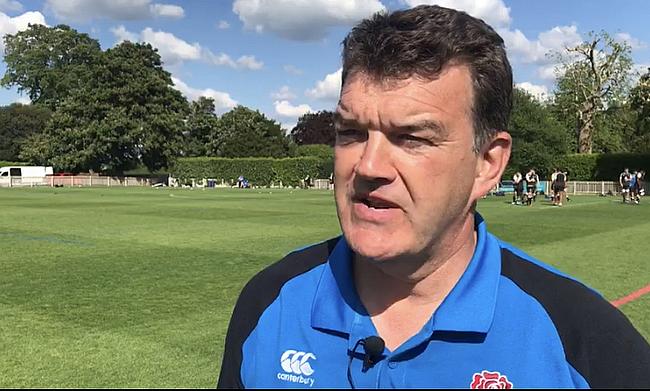 England U20s head coach Steve Bates believes his players will be keen to ‘dish out some payback’ when they take on Ireland in their opening match of the World U20 Championship.

England fell to a late defeat in Cork during the Six Nations as Ireland won 35-27 on their way to securing the Grand Slam.

The Young Roses ended the tournament in third place, but last month, they bounced back with an excellent victory over South Africa and Bates’ side will be aiming to get their World Championship campaign off to a winning start against the Irish on June 4th.

“I think it [Ireland] will be a massive test,” said Bates. “We won’t have massive preparation time when we get to Argentina once we have recovered from travel.

“The first game will be on us pretty quickly so it will be a massive challenge, but I also think that these guys will feel that there is some payback to be dished out as well.

“I also feel these guys will feel there is some payback to be dished out. We will be highlighting the importance of winning that first game.”????????????????

After losing to Ireland in the opening match of the Six Nations, England are out for revenge at the #WorldU20s next week. pic.twitter.com/KQ1N0SSdS5

“We will be highlighting the importance of winning the first game. If you lose your first game, you struggle with how you use your squad, but if you win the first game, it really puts you in a strong position.

“I have been really impressed with the approach so far. I think we have been pretty explicit about what we want from the players and they have done a very, very professional job.”

England did struggle for consistency in this year’s Six Nations which led to indifferent results, but with an excellent talent pool at his disposal, Bates believes his squad can perform in Argentina.

“We’ve left out some very good players,” he said. “There are some who haven’t been able to make it through injury.

“I think during the Six Nations, we used a lot of players. We don’t go into that process with the specific aim of using as many players as we can, but we know from experience that that tends to happen.

“They all played really well and that made selection very difficult indeed! We have got a good squad here and I think they are very capable.”

England travel to Argentina today after Bates updated his squad earlier this week. One of the changes to his original group of 28 players sees Sale Sharks’ Luke James replace Harlequins’ Marcus Smith, who is involved with England XV against the Barbarians on Sunday.

The likes of James add more Gallagher Premiership experience to Bates’ side with players such as Ted Hill, Ollie Sleightholme and Aaron Hinkley having also represented their respective clubs at English rugby’s top table this term.

In addition to this, there are players in the England squad who ply their trade at Championship level as well as the likes of Rus Tuima, Manu Vunipola and Josh Hodge who have experienced National League and university rugby this season.

Bates said: “We didn’t purposely look at saying we need a balance between those that have been before and those who haven’t. I think it’s just occurred naturally.

“Those different environments have different parts to play within the team. Some of the guys will be very much the top players in their university team or their National League team. I think all of those different experiences will be useful on this trip.

“I think the balance is pretty good and we have got a number of guys who can come again next year as well which is good for the development of this age group. There is a real sense of everyone making a contribution and there will be competition for places when we’re out there.”

"That’s the philosophy that Boydy brings to the club. If you’re young, but good enough, it doesn’t matter."

It has been a breakthrough year for @olliesleights and now the next step takes him to a U20 World Championship with England...https://t.co/ZbgbcoMtB9

After beginning the tournament against Ireland, England will face Italy and Australia in a four-day period and Bates admits the anticipation is building as his side bid for glory in Santa Fe.

“I think the excitement is palpable,” he said. “You can feel it. People are getting quite excited because they haven’t played much rugby lately so they are really fresh and hungry to get going.

“I think that is the same with all of the support staff too. We are privileged to be involved with the development of these young players and this is going to be a big test for them.

“We have got a good side and we feel that we can be very competitive at this age group on the world stage.

“We do have to be very aware that we have got tough group games and we will be preparing very thoroughly and positively. We want to go and do the best we can and win those games and we feel we are in good position to that.”