Hendrikse steers South Africa U20 to 43-19 win over Scotland 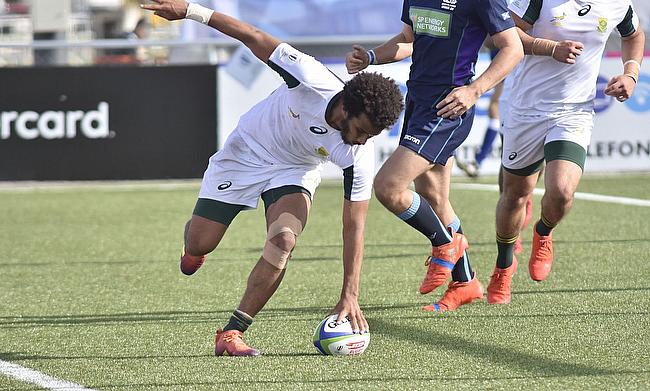 Ireland stun England in opening round of World Rugby U20 Championship

Jaden Hendrikse starred for South Africa as they defeated Scotland 43-19 in their World Rugby U20 Championship face-off at Racecourse Stadium.

Hendrikse, 19, on his first appearance in the U20 World Cup started the proceedings with a ninth minute penalty goal but Scotland bounced back with Murphy Walker dotting down in the 16th minute.

It was a matter of time before South Africa reclaimed the lead with Francke Horn crossing over after a 25-metre sprint and Hendrikse kicked the conversion. Horn almost got his second in a similar fashion but this time he failed to collect the pass cleanly as Scotland was handed a reprieve.

Nevertheless, South Africa's dominance in the game showed once again with James Mollentze setting up a converted try for Hendrikse in the 37th minute but his efforts were cancelled after Scotland were awarded a penalty try that also saw Emile van Heerden sin-binned as the teams went into the break with a 17-12 scoreline.

Hendrikse with his second try after the break stretched South Africa's lead to 10 points but Scotland remained in the hunt with Cameron Henderson powering over the line in the 63rd minute. As the final 13 minutes kicked-off, all three results were on the cards but South Africa seized the decisive moment with tries from JJ van der Mescht (67'), Sanele Nohamba (69') and Kudzwai Dube (80') to complete a 24 point win to begin their campaign positively.

South Africa captain Phendulani Buthelezi: “We started off really well and put them under a lot of pressure, but we just couldn’t convert that into points in the first half. I was very happy with the way the boys bounced back in the second half. It got tough for us at times, especially with that yellow card, but I’m really proud of the character we showed towards the end.”

Scotland captain Connor Boyle: “Going into half-time, we thought we were right in it. Coming out for the second half we had four or five chances which we didn’t take. Games are won and lost on the flip of a coin and South Africa today were very accurate. We didn’t take our chances and just threw the ball away, and you can’t really do that at World Cups.”

Elsewhere in Pool C, New Zealand eventually ran out 45-13 winners against Georgia in Santa Fe, but they were made to work hard for an opening victory.

Tedo Abzhandadze gave Georgia the lead from the tee, but tries from Taine Plumtree, Kohan Herbert and Dallas Mcleod put the Baby Blacks 19-6 ahead.

It was first blood to Georgia after the break as Vakhtang Jincharadze darted over, but New Zealand were able to surge clear as Leicester Fainga’anuku, Tupaea, George Dyer and Jeriah Mua all crossed to seal the win.