Scots need to be wary of 'unpredictable' Fiji 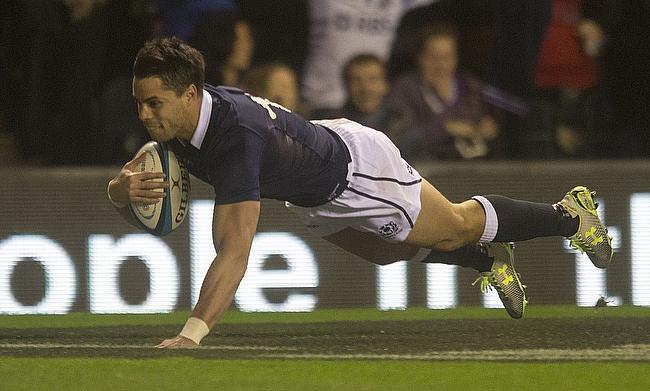 Sean Maitland is available to play for Scotland this weekend
©PA

Scotland add six players to autumn international squad ahead of encounter against Fiji
Hastings can make the 10 jersey his own - Townsend
Stuart McInally named Scotland captain for encounter against Wales
Weir: It's a good time for Scottish Rugby

Scotland winger Sean Maitland admits it can be hard to prepare for defending against the unpredictable and powerful Fijian wide men, stating “you don’t know if they are going to step you or bump you”.

The 30-year-old Saracens man missed last weekend’s loss in Wales because the game fell out of the international window.

He also sat out the summer tour as head coach Gregor Townsend gave him some time off.

As a result, the New Zealand-born player has not turned out for his country since March when they defeated Italy in the Six Nations.

He has been back in camp this week on the outskirts of Edinburgh and looks set to earn his 35th cap against Fiji at BT Murrayfield in the first home Autumn Test of three on Saturday.

Two out of the four tries short listed for try of the year have come from the 2018 Championship!

?? Maitland in the corner for @Scotlandteam

Wins over Samoa and Georgia in June have seen Fiji jump to 10th in the world rankings and the fact that the South Sea islanders defeated the Scots in Suva 17 months ago, means that Maitland and co are certainly not seeing this one as a ‘home banker’ by any stretch of the imagination.

And of course, Fiji have quality players with unique skills all over the park, including in the wide channels and Maitland is expecting to have to do a lot of defensive duties throughout the 80 minutes.

“I’ve played a few times against them in Europe and in the Premiership down south and [Vereniki] Goneva and [Josua] Tuisova are dangerous players one-on-one, you really don’t want to give them too much space.

“Tuisova is powerful, short and stocky. When you look at his highlights reel you don’t know if he’s going to step you or bump you.

“The thing about the Fijians is that they’re pretty much developed at age 15 - massive. I obviously went to a school in New Zealand and we had a couple of Fijians come over from the islands and I just remember them being absolute freaks.

“Look, in terms of Saturday it’s going to be a great test for us in the backs because on paper they’ve got a great team - they have a lot of ‘X-factor’ players.

Look who's taking our Edinburgh Tour Today!
It's @fijirugby !!
Great to have you onboard guys.#autumntests #rugby #sightseeing #edinburgh pic.twitter.com/9I7nmCqcuh

“For us, it is exciting, we are back at Murrayfield and the last time I was at Murrayfield we played England [winning 25-13 in the Six Nations] so I have a lot of good memories from the stadium.”

One of the hot topics in the world game at the minute is the ever-increasing demands on the players at the top level.

And Maitland believes professional players in the Northern Hemisphere “play far too much rugby”, but has praised the backroom staff at Saracens and Scotland for the way they look after him.

“We play far too much rugby for sure though in the Premiership they are coming up with new ways of combating that,” stated Maitland, wo has scored nine international tries.

“The RPA [Rugby Players’ Association] do a great job of looking after the players down south, but in terms of rugby, there is far too much. My club Sarries look after me and Gregor rested me in the summer - now I feel good - I have had two weekends off lately and I’m fresh and ready to go.”

Meanwhile, Scotland vice-captain Ryan Wilson is confident his side can contain Fiji’s star player - and one of his good friends from their time together at Glasgow Warriors - Leone Nakarawa.

Speaking about the 30-year-old Racing 92 second-row Wilson said: “We know what he's like, he was Euro player of the year last year.

“He's a dangerous player, but we'll see if we can contain him. I can wind him up enough - I know what buttons to press!

“I met up with him on Tuesday night and he was joking and saying that they are all going to run over Finn [Russell, likely to start at 10 for Scotland].

NEWS | Wilson eager to get back to winning ways.

"We go out to win every game in a Scotland jersey and we didn’t do that [against Wales] so yeah we were frustrated and want to make sure we go out and do a better job this week."

“The thing with the Fijians is that you are not going to be able to contain all of them at once because they are all outstanding individual players.

“Over the last few days we have put a big focus on what we have to do: go out and play well, look after the ball, don't give them anything and hopefully come out on top.

“We know we're a fit team and with them maybe not so fit so, we will be trying to play at tempo and looking to move the ball about, but anything 50/50 we will look after the ball and play a bit tighter than we did last week.”