Hastings can make the 10 jersey his own - Townsend 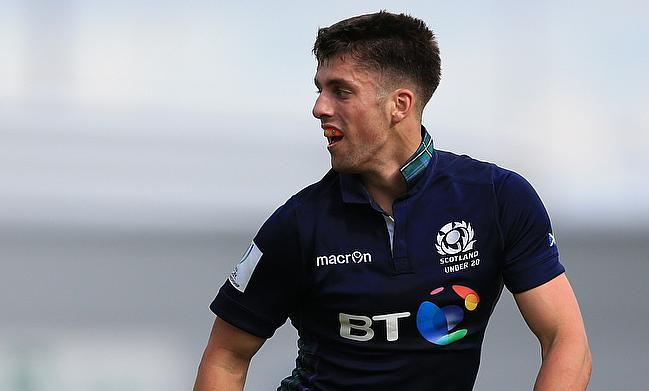 Adam Hastings has impressed in the Pro14 this season
©PA

Stuart McInally named Scotland captain for encounter against Wales
James Lang and Darcy Graham added to Scotland squad
Weir: It's a good time for Scottish Rugby
Jonny Gray: A defeat like that, it's something you don't forget

Scotland’s Gregor Townsend has laid down the gauntlet to stand-off Adam Hastings ahead of this Saturday’s match against Wales, telling him not just to push Finn Russell for the number 10 jersey going forward, but to try and make the starting spot his own.

With the Doddie Weir Cup clash in the Principality Stadium in Cardiff falling out with the international window, the likes of Racing 92 playmaker Russell are unavailable to the head coach.

As a result, the 23-man squad that will be involved at the weekend features 13 Glasgow Warriors and 10 Edinburgh Rugby men.

All will be looking to make an impact before the exiles return to the fold for the upcoming home clashes with Fiji, South Africa and Argentina - with 22-year-old Hastings in the spotlight given the pivotal position he plays.

Many feel he is just borrowing the jersey from Russell - the 26-year-old with 37 caps to his name - but after selecting his team on Wednesday, Townsend hinted that it is more of a straight battle for the spot.

And he even alluded to the fact that they could even play in the same Scotland side with one of them shifting to outside centre in the future.

Adam Hastings is Scotland’s starting fly-half V Wales in Cardiff on Saturday. I’m sure his dad & uncle won’t be far away. https://t.co/mlKxu5RQqc

“It's not so much about Adam pushing Finn, it's about Adam looking to get that number 10 jersey for himself.

“He's now going to have played [a number of] internationals [against USA, Argentina and now Wales] in a row and we'll now be looking for a response from Finn.

“We've seen that already from Finn this year. He's got a big game this weekend against Montpellier, but it's a genuine competition for that jersey.

“Adam has been one of the form players in the Guinness PRO14 this year and has really grabbed his opportunity for Glasgow.

“What he’s done very well this year is work hard off the ball. He’s got an outstanding engine and that means he gets more involvements in the game and he’s playing with confidence.

“His running game has come through this year, probably more than he or us expected, and his game management is always going to be something he will get better and better at the more he plays in that position.

“His temperament, his confidence, they are what you want in a stand-off - looking to try things, looking to make things happen, being very positive.

“His experience in Argentina and how he played has got to be in his muscle memory and realising that the next time he gets to play an international level he can do similar things and they will work out ok.

“This is a big challenge this week; it is Wales, it is away and they are huge favourites I would imagine, but if he plays really well, that does make it a much more competitive position [going forward].”

Hastings will be winning just his fourth cap at the weekend and another young back could make his debut off the bench.

Edinburgh winger Darcy Graham, 21, has been on fire for his club in the last month and it has prompted Townsend to catapult the Hawick-reared ‘pocket rocket’ straight into his matchday 23.

“He has shown great form over the last three or four games,” Townsend explained.

“Originally, Darcy was just training with us and not in the squad, but he impressed me during the early Heineken Champions Cup rounds and we said to him that depending on what happens over the next three or four weeks and how you play, you could easily come into the mix for one of these games over the November period.

“I thought he was outstanding against Toulon and even in defeat at the weekend [in the PRO14], I felt he was a player who took the game to Zebre broke nine or 10 tackles and was very aggressive defensively.

“That’s the mindset we need when we go to tough places like the Principality Stadium, so he’s earned his chance to play international rugby.

“His ability makes him hard to tackle and he is skilful in the air, but it’s more his approach in the past few games where he’s taken it to the opposition. He has been aggressive in defence, won a couple of turnovers and looked to get on ball which has impressed.

“If he gets the opportunity to play, we’ll be looking to him to help us win.”

Hooker Stuart McInally will skipper the side having led them in their last match in Argentina in the summer while tighthead prop WP Nel plays just his fourth Test of 2018 after overcoming injury problems.

Elsewhere in the pack, Ben Toolis gets the nod over his Edinburgh team mate Grant Gilchrist in the second-row and Jamie Ritchie earns a start at six with Magnus Bradbury out with an injured shoulder.

Behind the scrum, Ali Price wins the battle for the number nine jersey with his Glasgow team mate George Horne on the bench while Alex Dunbar and Huw Jones team up in the midfield.

Scotland squad: to play Wales at the Principality Stadium

Wales v Scotland for the Doddie Weir Cup is on Saturday, November 3 at 2.45pm

Australia and South Africa to face Scotland in 2021 November series