Scots decision to pick exciting speedster Sofolarin a “no brainer” 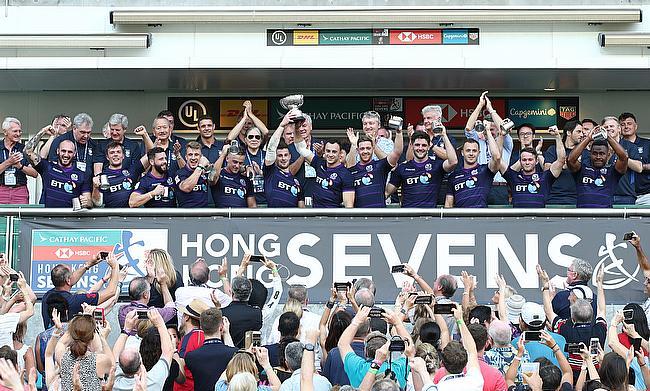 Selecting Femi Sofolarin, who turned out for England in HSBC World Sevens Series last season, as part of the Scotland core squad for 2019/20 was a “no brainer”, according to new head coach Ciaran Beattie.

Winger Sofolarin, 19, started playing rugby aged 11 at Dulwich College and Beckenham RFC and went on to make his Premiership club debut for Harlequins under-18s in November 2017.

He was capped for Scotland at XV-a-side under-18 level in the 2018 Six Nations Festival in Wales and, indeed, scored a try as a replacement back when the Scots defeated their English counterparts 32-27.

That try and his raw pace clearly alerted England scouts to his talents and soon he was playing sevens for them, scoring a try on his Rugby Europe Grand Prix Sevens Series debut in Marcoussis, France, in July 2018.

His progress then continued and he turned out for the full England Sevens squad on the showpiece circuit in Singapore, London and Paris in April, May and June.

However, he will now be wearing dark blue again as he was not ‘captured’ by England after those outings because he is still under 20-years-old.

And Beattie has convinced the Scottish-qualified Newcastle University student to join his 14-man core group ahead of the opening leg of the 2019/20 World Sevens Series in Dubai next month.

Some of the squad will head to Elche, Spain, this weekend for a European warm-up tournament and Sofolarin will be involved.

“Femi has played a lot of sevens and it was a no brainer to get him in really,” Beattie, 33, told TRU.

“He has obviously played Scotland under-18s before so we have known about him and he has been in and around the [Scottish Rugby] system for a long time.

"He is now at Newcastle University and he is a great bloke. There was no persuasion needed, there was just a discussion with him and honest and frank dialogue with [England Sevens and GB Sevens head coach] Simon Amor.

“It makes sense and with him being at Newcastle now we believe we can help facilitate his development.

“He is not tied to England, I think he will have to make a decision around Sydney time [1-2 February, 2020] and after that he would be tied to us.

“Femi has still got to prove himself, he is going to come to the tournament in Spain at the weekend, but he has trained really well and he has real pace and is an exciting player.”

“His selection is a bit of a shock, but a good one”

Robbie Fergusson, a key member of the Scotland squad and one of last year’s co-captains, admits the more experienced players were “surprised” when Sofolarin first came to training a few months ago, but is “excited” to have him available.

“We were a little bit surprised when he came to training as we saw him play for England last year,” Fergusson, 26, said.

Exact moment I got told Newcastle is colder than London ??

“We have seen him playing, know what he is about and it is quite exciting knowing that there is someone of his talent about in our group.

“He is such a young lad, his feet are pretty special and he as a good turn of pace, it is a great addition to our squad.

“[The call-up] was quite unexpected to us, I had a little chat with Ciaran recently and he had said there might be something in the pipeline. I looked Femi up and there were a few of his clips online and he is pretty handy, his selection is a bit of a shock, but a good one.”

Sofolarin one of four new core faces for Scots

The 10 other players, led by experienced heads like Jamie Farndale, Fergusson, Max McFarland and Gavin Lowe, were all part of the programme last year as Scotland finished 10th overall under John Dalziel who is now Glasgow Warriors forwards coach.

And with Olympic selection for Great Britain to be fought for over the next few months expect this Scotland squad to be more competitive than ever on the biggest stage of all.

Of the newcomers, Brown, who earned one Scotland XV-a-side cap in 2012 against Australia, made two World Series Sevens appearances at the end of 2018/19.

The 29-year-old is likely to play in the forwards in the abbreviated game and Beattie said:  “Tommy is bouncing around at training like he is a 21-year-old and he has a real spring in his step.

Recently he headed to the USA with Tiger Rugby and now @Scott_Bick has been brought into the @Scotlandteam Sevens core squad by head coach @ciaran_beattie - find out more about the @MarrRugby and @WaterboysRugby man via my @TalkRugbyUnion piece from August https://t.co/3j4BwclIGf

“Having his experience around having lost players like Scott Riddell, Glenn Bryce and Jo Nayacavou is great because he brings a calmness to things and is really great around the group.”

Like Brown, winger Rowe also earned two caps last term, has previously played for Scotland under-20s and was a big player for Ayr with all the success they had last year while Bickerstaff has been knocking on the door for a few years and has been a very consistent performer with Marr.

“Kyle has real talent and will bring a different element to the group while Scott has been part of the wider training squad in previous years and is very fit, very fast and has a good rugby brain,” Beattie added.

“I am excited to see how these guys and Femi and Tom integrate into the squad.”