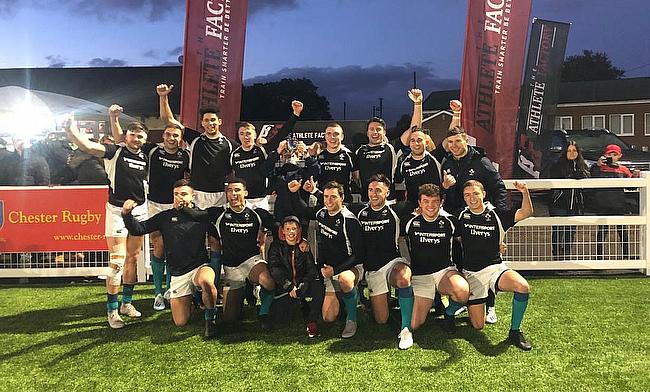 Following the end of play at the Athlete Factory International 7s competition, Joe Harvey caught up with winners Ireland, as well as England Head Coach Simon Amor and USA Head Coach Mike Friday to see what they made of their weekend in the north-west.

It was Ireland that took home the Athlete Factory Cup on Saturday evening. Beating a South Africa team that had only conceded two tries the entire tournament, their victory seems like the perfect way to begin warming up for their debut season as a World Series regular.

TRU heard from Ireland Sevens stalwart Harry McNulty earlier this Autumn about how the side were preparing for their first season as regulars on the circuit and his captain, Billy Dardis was keen to emphasise that the win over South Africa in Chester was no easy feat.

“It’s a good start,” Dardis said. “It’s obviously going to be a long year with a lot of legs and then the Olympic Qualifiers at the end of it, but this is a good start and sets the tone for the year.

“Getting one over South Africa, who had a lot of their good players is a good start. We didn’t really think about it I suppose (South Africa’s defensive record going into the game. We came into this weekend wanting to focus a lot on our defence, just get comfortable defending for long periods of time, letting the attack look after itself.”

Ireland’s rise to the top tier has been dramatic. Having scarcely appeared on the Series between the 2004/05 season up until 2017/18, the side will now regularly feature having beaten hosts Hong Kong in the World Series qualifying tournament.

Harry McNulty chatted to TRU about #LoveIsland, the growth of Ireland 7s and why playing on the World Series circuit also has its perks.https://t.co/M0PLeKwm3z pic.twitter.com/79SntktqbT

With landmark performances in London the last two years as well, finishing third in 2018 and then sixth in 2019, Ireland’s brand of sevens really captures the eye. With so much talent in the squad, it is clear that Director of Rugby Sevens, Anthony Eddy, has identified young talent that could still pull on a 15-a-side jersey if they chose to.

Eddy, much like his captain Dardis, was happy with what he saw from his team on Friday and Saturday: “There’s been some really good competition here this weekend, a number of nations with some pretty strong teams, so from our perspective we’re really happy. It’s our first hit out of the season so we are really pleased.”

Mike Friday’s team had a year to be remembered on the World Series last year. Finishing second in the opening four tournaments before winning in Las Vegas, it seemed that Friday had and his side had their sights focused on the top.

After the win in their own backyard, the USA proceeded to finish third and fourth in the final five legs of the season. That accompanied with a strong end to the season by Fiji meant that the USA finished as runners-up, securing a place at the Olympics, but just 10 points shy from a World Series victory.

Harley Wheeler opens up on how grateful he is to be here, the welcoming nature of this team, and what he's looking to get out of AFI 7s. https://t.co/OIXPGTPpBQ

In Chester, the side had a difficult two days. On Friday night the weather was atrocious, seeing the Eagles lose to Ireland and France, meaning that they were demoted to the Plate competition which they ultimately won.

“For me, I’m not interested in wins or losses at this tournament,” Friday said. “Whether I’m at home scrimmaging against each other, or if I’m here scrimmaging another team. We’re not getting caught up on results.

“There were some clear areas that I wanted to focus on and I am very pleased with some of the changes in behaviour that I have seen. Areas that may not be clear for those that don’t know what they’re looking for and that’s the most important thing.

“Yes, the conditions don’t allow us to play our fast, wide, powerful game and we’re not used to playing in the cold and the rain, so as a consequence, our handling has been poor and as another consequence that meant that we have gifted 15 possessions back to Ireland and France.”

“What I’m interested in are certain areas of our game that we’re working on and will be more pertinent to the way the World Series is and the conditions that we’ll face on the World Series. I’m pleased because it’s a chance for some of the less experienced players to get a hit out, it’s a chance, an opportunity for the experienced boys to get some early reps and nothing more really.”

Friday, as well as the rest of his team, will also be anticipating the return of their stars who represented the USA at the World Cup.  Ben Pinkelman and Martin Iosefo played regular parts in Japan, whilst Madison Hughes, USA Sevens captain, is still on leave after being involved in the 15s setup in the lead to the tournament.

Labouring to a fifth placed finish on the World Series last year, England rallied to qualify Team GB men for the Olympics in Colomiers.

Several months after that win, England Head Coach Simon Amor was appointed as Team GB coach for the second Olympics in a row.

In Chester, Amor’s young England side finished fourth overall, losing to France in the Bronze Final. It was impressive to see a side with such exciting youth perform so admirably against teams like South Africa who had brought a full-strength team to the Athlete Factory.

“The challenge we’ve got is that a lot of our squad is injured at the moment, or rehabbing and returning from injury,” said Amor.  “So, the team we’ve brought to Chester is the strongest team that we’ve got at the moment.”

Congratulations to Simon Amor who has been named head coach of @TeamGB men's sevens for #Tokyo2020 ??????

“What that does is create great opportunities for every young guy to play alongside the Dan Norton’s, the Ollie Lindsay-Hague’s, see how they step up, how they grow, how they learn with these people and I have been massively impressed by them.

“What all the teams are trying to do right now, with how competitive the World Series is, how intense it is, is to build the depth of the squad and talent pool that you are working with. So, there is nothing better as a coach in my position, to have all these young guys knocking on the door and pushing for more opportunities.

“Particularly going into this year, because this year is going to be a really fantastic and tough year with the Olympics at the end of it.”

When watching Amor from the sidelines it was clear that this was a man who breathes the game. Always with two bottles in hand, the former scrum-half was on the field at any given opportunity talking to his young players and offering some words of encouragement.

When there were no more balls available. it was Amor that sprinted to the opposite end of the field to collect some. Having already guided GB to a silver medal, Amor’s enthusiasm for sevens is as strong as ever and you have to wonder if he could go one step further next year in Tokyo.