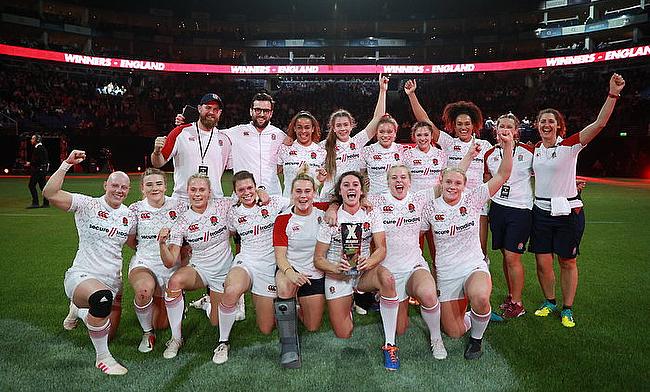 On Tuesday, the O2 Arena played host to the inaugural instalment of RugbyX, rugby’s latest format which may have a bright future.

A full contact 5-a-side tournament, matches lasted 10 minutes each as some of the best players in world were on show in the capital and the crowds certainly weren’t disappointed.

Talking Rugby Union was present in London as Argentina won the Men’s competition and England clinched the Women’s title.

Starting off with England vs the Barbarians, fans couldn’t have been given a better introduction to the competition.

When the game finished as a 30-30 draw, the tournament went to 1v1, with the first team to score three tries winning the game.

After experiencing @RugbyXOfficial for the first time, @Dan_Norton4 believed that the competition had the opportunity to engage a new set of fans. pic.twitter.com/lvNjEGN7S4

It was the Barbarians that won when Wales captain Luke Treharne refused to let go of Rich de Carpentier’s leg when the England man was in attack.

It was then Argentina who set their stall out for the evening. Running in eight tries against Mike Friday’s USA team, it was clear that the South Americans were keen to impress at the O2.

Up next, Ireland faced the Barbarians and with Love Island winner Greg O’Shea in their side and scoring, the Irish won the game 25-20.

After their 40-20 loss to the Argentines, the USA were consigned to defeat once more against the France as they fell to a 25-15 defeat.

Not long after, England were subjected to a second loss of the evening. This time it was at the hands of new World Sevens Series side Ireland. Scoring two tries in contrast to Ireland’s six, Anthony Eddy’s men quickly became crowd favourites.

To round off the pool stages, France beat eventual champions Argentina 25-20, sending the crowd into the belly of the O2 wanting more later that evening. In the quarters, the Barbarians fell out of the competition, falling to the USA 35-15.

It was then the turn of Argentina and England to take one another on. Los Pumas scored 11 tries to put the hosts out of the competition and the South Americans were starting to click through the gears.

In the opening semi-final, Ireland took things into overtime to beat the USA 25-20 and secure their place in the final whilst  Argentina reserved their loss to the French earlier in the day by also winning 25-20.

The final was another close affair. Ireland and Argentina went toe to toe for the entire game, with Los Pumas eventually pulling away. Winning 25-15, Argentina were well worth their victory and they will be hoping that can provide them with a platform ahead of the World Series, which begins in Dubai in December.

Red Roses shine at the O2

With only four women’s games in this edition of RugbyX, the first match of this tournament was between England and France. It was the Roses that ended the game as victors, scoring seven tries to France’s four to secure a place in the final.

Endless love for all the support that made playing at home pretty special.

Later on in the afternoon session, Ireland took on the USA, with the North American team powering to a 30-15 win over the Irish thanks to an excellent display from Alev Kelter.

Ireland took on France in the third and fourth playoff and it was Les Bleus who came out on top with a 35-20 victroy.

In the final, England eventually became champions. In regular time the sides could scarcely be separated with the game finishing 20 each. As a result, the game went to 1v1, with England eventually coming out as the victors in front of an excellent home crowd.