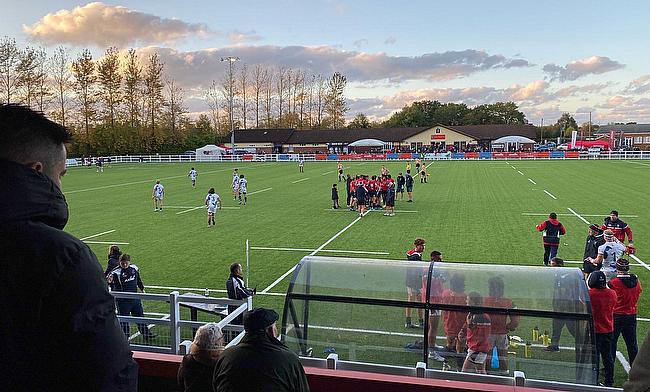 The final weekend of October saw some of the best-known names in the Sevens Series come to Chester in what was a final chance to prove themselves prior to Dubai in just over a month.

It was the new World Series side Ireland that left Hare Lane as victors, no doubt giving them supreme confidence ahead of a maiden season on the circuit.

Day one of the Athlete Factory Sevens kicked off when Ireland took on Jamaica. With both sides competing in a repechage tournament next year to decide the last team that will be present at the Olympic Games in Tokyo, it was an opportunity for each country to see each other in action.

Ireland won the tie convincingly 21-5, before the USA’s first game of the competition. Playing in front of what seemed like a home crowd at times, Mike Friday’s side defeated a youthful Nigeria outfit 39-5.

Hong Kong played the Jesters soon after, earning a hard-fought 14-0 win in the rain. England then made their bow in Chester. Simon Amor’s team beat Spain resoundingly 24-5 as weather conditions continued to deteriorate. France then beat Nigeria 45-5 to open their account at the tournament.

Fantastic 7s weekend @AFChesterUK seeing 10 international teams prepare for the @Hsbc7s series. Thank you to the teams and the people that made it possible especially all at AfF l! We have some special people and coaches. Thanks to @FloRugby https://t.co/wafluZakLW

It was then time for a nail-biter. Ireland played the USA as a permanent World Series side for the first time, grinding out a 19-17 win the sopping wet conditions. Fans at Hare line then got to see South Africa take to the artificial turf with the likes of Rosco Specman and Cecil Afrika performing well to beat Hong Kong 29-0.

After an hour and a half break, play resumed and the rain had by no means subsided either. An enthralling encounter between Nigeria and Jamaica was the perfect way to restart, with both teams having shown promise at times. Jamaica won 24-12 eventually, having been pegged back by the Nigerians early on.

Just three more games would follow on Friday night. The USA, well supported once more, were beaten. Deprived of possession, the side couldn’t assert their dominance on the tie. Added to this, the weather made the game messy, finishing 5-7 in favour of fellow World Series side France.

In the last two games of the day Spain soundly beat the Jesters, before South Africa defeared England, winning 31-5 as the English youngsters struggled against a physical Blitzbok side.

The start of Saturday was as wet as Friday. Ireland played France just after England had beaten New Zealand to reach the World Cup final in Japan, with fans fairly vocal early on as a result. It was the Irish that came out on top, beating their opposition 26-7.

Due to their positioning in the pool stages, the USA, Spain, Hong Kong and Jamaica were put into the Plate competition, whilst England, Ireland, France and South Africa competed for the Athlete Factory Cup.

In the first plate semi-final, the USA finally got into full-flight with the weather having cleared up significantly. It was the first time that fans got to see Carlin Isles and the former Glasgow man scored a try on the way to a 27-7 win over the Spanish.

In the second semi-final, it was the professionals from Hong Kong that progressed as they beat Jamaica 48-5, sending the Caribbean side to the Shield Final alongside Spain.

To open up the knockout rounds of the Cup competition, a clash between England and Ireland wasn’t a bad place to start. Both Simon Amor and Anthony Eddy had untested players in their teams, but still had experienced heads to take them forward.

Ireland provided an extremely tough test for the English, eventually winning the game by 12-5 thanks to Jordan Conroy. England were sent to the Bronze final, with their opposition yet to be decided.

That opposition was appointed soon after when South Africa beat the French 29-5. Having looked unbeatable of the course of the two days, South Africa had conceded no more than one try per game, leaving it all up to Ireland to get a result in the Cup final.

In the Shield final, it was Spain who took the victory by 29-0. Beating a tired Jamaica team by this stage, Spain showed good attacking prowess with ball in hand and even put in a good defensive display having looked weak in that area earlier on in the day.

Then it was the turn of the USA to be victorious in the Plate final. Playing against Hong Kong, both sides had strong support in Chester. Hong Kong had the friends and family of players in the crowd whilst America were favoured due to their relationship with Athlete Factory owner Phil Greening.

Beating Hong Kong 32-5, it was clear to see how effective the USA were when able to keep possession of the ball in better weather conditions.

England then fell short to France in the Bronze final. The French, who had performed well over the weekend without many of their superstar players, won by a fine margin, 28-24 as the English perhaps began to think about the inaugural RugbyX competition on Tuesday.

Then came the final. South Africa against Ireland to take home the trophy. Ireland had it all to play for, South Africa had been resolute in defence the entire competition, only conceding two tries and it seemed like they were a sure thing to win in this game.

Ireland had other ideas. Smothering the South African attack, the likes of Cecil Afrika and Seabelo Senatla were unable to get much ball as Ireland restricted them to just the one try in the game.

Ireland bided their time for their scores waiting for momentary lapses from their opposition and pouncing efficiently to score two tries, converting one to win 12-5 to clinch the trophy.

Reaction from several of the teams involved still to come.