Scotland's Craig Jackson has had a summer to remember 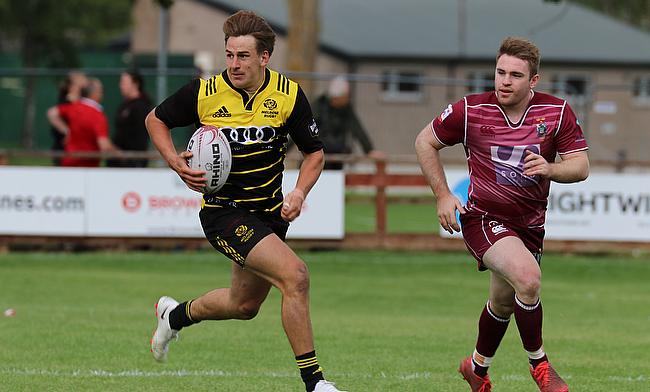 Did you hear the one about the person who played rugby in San Francisco, Northampton and Peebles over a three-week spell?

You didn’t? Well now you can as Scottish rugby player Craig Jackson clocked up the miles - and appeared for three different teams at three very different venues during the summer.

Stand-off/centre Jackson had a great 2017/18, winning the BT Premiership and Cup double with his club side Melrose. He was also named player of the season by his peers.

Having played XV-a-side rugby almost non-stop between August and April the part-time player, who works at Edinburgh College when he does not have his boots on, might have wanted a rest, but that wasn’t going to be the case.

Absolutely honoured to have received this award. It has topped of an incredible season receiving a Club int cap and winning the double with @MelroseRugby . Of course it wouldn’t have all been possible without the great squad and coaching team #topbunch Here’s to next season ???? https://t.co/6k9bEbQtS1

Being a sevens lover, he played for Melrose in a number of the Kings of the Sevens circuit events in April and May, but then things really cranked up a notch.

“At the end of the XV-a-side season, I had been invited into the Scotland Sevens extended squad by head coach John Dalziel and was training with them quite a bit,” he explained.

“That was around the London and Paris legs of the World Series while as soon as College broke up for the summer, I managed to get in full-time to train with Scotland.

“I knew due to a few injuries and the like that we were a bit short in the half back positions heading towards the World Cup in San Francisco, but having not represented Scotland Sevens since I was younger and a few core players ahead of me, I wasn’t thinking that I would make the final squad.

“It was obviously my aim, so when John named the squad one day after training I was delighted.

“I was only 18 the last time I was involved in Scotland Sevens, being called up to an event in Las Vegas, so to be looking out my passport many years later to be heading back to the USA was quite surreal.”

The World Cup, played at AT&T Park in a converted baseball stadium, took place from July 20 to 22 and was a straight knock-out event.

Scotland nearly came a cropper in their first tie, being 26-0 down to Kenya in the last 16 and seemingly out of things.

That was with just over four minutes of the 14-minute tie remaining.

However, Harvey Elms grabbed a try to give a glimmer of hope and John Dalziel’s men never gave up.

A second try came from skipper Scott Riddell - this one converted by Robbie Fergusson - and a penalty try worth seven points then followed.

A Kenyan was yellow carded for stopping Elms scoring when that penalty try was given, but even then, Scotland were still down 26-19 and time was running out.

However, somehow Jamie Farndale managed to squeeze in at the corner for the Scots’ fourth try and Fergusson kept his nerve to drop kick the conversion from the corner to make it 26-26.

By this point, the Kenyans had lost the plot and were reduced to five men with a second yellow card and in injury time, Farndale went in at the opposite corner for a dramatic winner.

The Scots could not back it up going forward, eventually finishing seventh, but Jackson was glad to be part of it all.

Only 8 years on since my last @Scotlandteam 7s outing, can't wait to get out there tonight, been a great build up with these lads! Really does top off an unbelievable year personally. #puggyup #rwc7s2018 #SanFran pic.twitter.com/GnvSdPaKNF

“That Kenya tie was just bizarre,” he said.

“You are standing there as an unused sub itching to get on, but then you just turn into a cheerleader as the comeback starts and you just want the guys to do it so badly.

“It was amazing and the emotions in the huddle after that one were pretty amazing.

“It was the end of a long, hard season for the sevens boys which had included a Commonwealth Games and by the end of the weekend they were out on their feet.

“The stadium in San Francisco and the atmosphere were among the best I have ever experienced.”

Surely a break after that trip? No, do not be silly, Jackson - whose cousin Ruaridh plays for Glasgow Warriors and Scotland - was no sooner back in Scotland than he was driving down to Worcester.

There he hooked up with the Warriors squad to take part in the Premiership Sevens at Northampton Saints Franklin’s Gardens on July 27 and 28.

He explained: “I had linked-up with Worcester a bit when I was down at Hartpury a few years back so they asked me if I was keen to come down and play in the event.

“That was agreed before I was selected for San Francisco. The timings were a bit tight, but I enjoyed it and it was a good run out.”

Fast forward a few days to August 4 and… a rest? No, the Peebles Sevens at the Gytes with Melrose of course.

In that one, Melrose eased through to the last four where they met last years Kings of the Sevens Watsonians.

A great performance from Jackson’s team saw them edge it 19-17 and then they saw off Heriot’s 17-12 in the final.

Since Melrose won the Peebles Sevens, Jackson has picked up even more silverware as his club defeated Jed-Forest last Friday evening to claim the Border League trophy which was held over from 2017/18.

And this coming Saturday, August 25 Melrose take on Stirling County at their home ground of the Greenyards at 2pm which acts as a pre-cursor to the competitive action beginning on September 1.

So, Jackson continues to be a busy boy, but if he keeps performing well and winning things then we are sure he will keep on loving his rugby going forward into 2018/19.