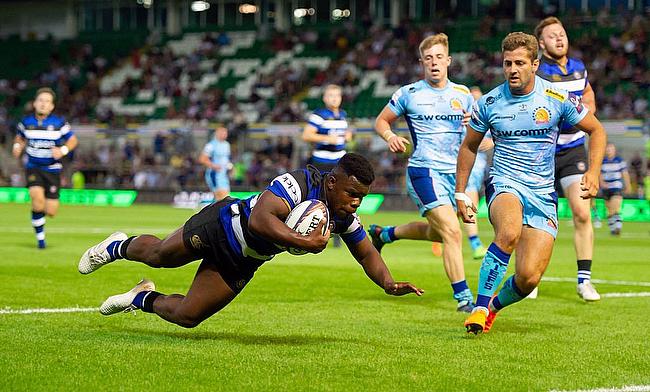 Wasps, Newcastle Falcons, Exeter Chiefs and Harlequins managed to remain unbeaten as they topped their respective pools in the opening day of the Premiership Rugby 7s at Franklin's Gardens on Friday.

The four teams will be joined by Sale Sharks, Northampton Saints, Bath Rugby and Saracens as they line-up for the quarter-finals on Saturday with Leicester Tigers, Bristol Bears, Worcester Warriors and Gloucester Rugby will battle out in the Plate league.

Northampton Saints kick-started their campaign with a thrilling 22-20 victory over Gloucester Rugby but their chances of topping the group dampened after defending champions Wasps hammered the home side with a 35-7 defeat. The Ricoh Arena outfit kept their hope of winning a hat-trick of title intact as they trounced the cherry and whites with a 33-7 victory to top the group. Gloucester, who failed to win both their games dropped out of contention for the quarter-finals.

Confirmation then that @WaspsRugby and @SaintsRugby are through to the quarter-finals - we'll bring you the fixtures shortly. @gloucesterrugby will compete in the Plate tomorrow.#PremRugby7s pic.twitter.com/BwwLG4J7J5

Last year's finalist Newcastle Falcons did no harm to their reputation with a 17-26 win over Saracens and followed it with another 21-14 victory over Leicester Tigers to book the top spot while Saracens managed to sneak through for the second spot with a 26-14 win over the Welford Road unit in what was a decider.

And here's how Pool B looks after that result??@FalconsRugby are through as group winners with @Saracens joining them in the #PremRugby7s quarter-finals.

Now the final game of the night?? pic.twitter.com/rGwD5xjgHT

Exeter started the season well with convincing 28-14 and 31-15 victories over Worcester and Bath respectively but that came after the Recreation Ground unit sealed a vital 29-12 win over Warriors to take the second spot.

England U20 international Calum Waters starred for the Harlequins as he scored a hat-trick in both the games and ended the day one as leading point-scorer as they completed a 41-12 and 24-21 wins over Worcester and Sale Sharks respectively. The opening game of the tournament proved vital for Sale Sharks as they sealed a 12-26 win over Bristol to take the second place in the group.

Confirmation that @Harlequins have finished top of Pool D.@SaleSharksRugby are through to the QFs in second place while @BristolBears will compete in tomorrow's Plate SFs.#PremRugby7s pic.twitter.com/FmSPWn6irW

Fixtures for Quarter-finals and Plate semi-finals

We start with our four quarter-finals?? from 2.30pm while the two Plate semi-finals will start at 4pm.

Get down to Franklin's Gardens?? to watch it live or tune into @btsportrugby?? pic.twitter.com/hj1I0gJ4yn