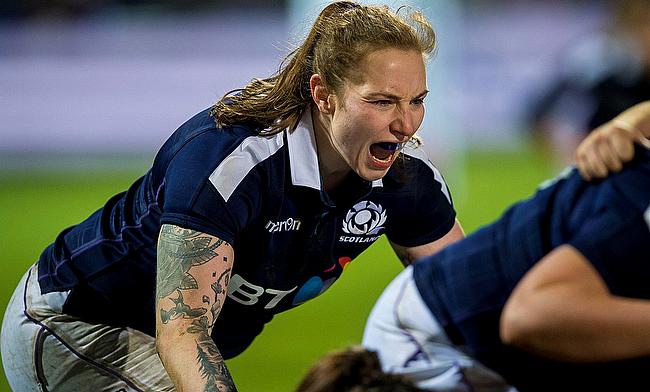 Journalist Gary Heatly spoke to the dynamic forward about her career and her recent move to Harlequins.

As a teenager, Jade Konkel used to drive 168 miles from Inverness to Glasgow just so that she could play rugby at a higher level.

And it has certainly paid off - her journey upwards has continued in recent times and included numerous Scotland caps and a spell playing professionally in the best league in France.

Now she has joined top English side Harlequins - and you feel there is much more to come from this strong minded and strong running forward.

As women’s rugby in Scotland has grown in popularity and the national team have started to put positive results on the board over the last two years Konkel, the 24-year-old No.8, has become a talismanic figure.

She played a big part in the two Six Nations wins for Scotland in 2017 against Wales and Italy and was also involved as they won away in Ireland this year.

Back in the summer of 2016 she was named as the first professional female player ever in Scotland - and recently the number of contracted players north of the border with Scottish Rugby expanded to eight.

Going forward, Konkel will be at Harlequins, full-back Rollie is staying at LMRCV with centre Thomson having moved to Darlington Mowden Park.

As well as the trio, who were already contracted to Scottish Rugby, national team captain Lisa Martin, Helen Nelson, Sarah Bonar, Megan Kennedy and Lana Skeldon have all been handed contracts.

With Sarah Law moving back to being a BT Academy supported player as she recovers from injury, it means that there are now eight full-time Scottish players.

Stand-off/centre Martin will join Rollie at LMRCV while fellow back Nelson will be playing for Montpellier.

Second-row/back-row Bonar will stay at Tyrrells Premier 15s outfit Loughborough Lightning and prop Kennedy and hooker Skeldon will stay at Stirling County and Watsonians respectively in the Scottish top flight.

A few weeks ago, Konkel packed up her bags and left Lille to move to leafy Richmond and from speaking to the player with 32 international caps to her name you get the feeling she cannot wait to show people in the Tyrrells Premier 15s just what she can do.

“Having watched tapes of Harlequins playing last year they like to play an offloading game and hopefully I can augment them in that respect also bring the physical side of my game and a lot of ball carrying to the party,” she said.

Karen Findlay, who was the Scotland coach when I made my debut five years ago, is on the ‘Quins coaching staff while my Scotland team mate Deborah McCormack is here so I have settled in quickly.

"The standard of the Tyrrells Premier 15s is getting higher all the time and it is great to see a crop of Scots down south now looking to make our mark.”

Getting ready to play against the likes of Saracens and Wasps seems a far cry from when Konkel was growing up on the Black Isle peninsula in the Highlands of Scotland with a family that was rugby daft.

When she was around 17, she headed down to Edinburgh for a day for up-and-coming rugby talent from around the country and she impressed enough to be put into the Scotland under-20s set-up.

As a result, she joined Hillhead Jordanhill in Glasgow to get some top-level club experience under her belt and most Sundays she would make the long drive down from home to play matches.

In early 2013, she made her full Scotland debut off the bench against England and things have gathered pace from there.

This past season spent in France was an eye-opening one, but also a very useful one.

“Wow, I learnt so much in France both on and off the pitch that it is hard to sum up everything that I took away from that spell,” she stated.

“I think the physicality over there really helped me and my offloading game has come on a lot.

“Everything about the rugby over in France was bigger than I was used to, the stadium we played in was great while a number of our matches were shown on television.

“I saw that as exciting rather than something to be daunted about although I would be lying if I said there weren’t some nerves when I first headed across. I was moving away from my family and friends and going to a club with new team mates when I didn’t speak the language.

“That is sport though and the places that it takes you should be embraced not feared.”

?? "Harlequins has got so many great players and I think I'm going to learn a lot from each and every one of them."

Konkel is now settling in well to life on the outskirts of London and is aiming to soon be back in full training following a shoulder operation.

“It can be annoying when you go somewhere new and can’t get into things straight away, but the medical team here at ‘Quins are excellent and they will keep me on the straight and narrow as I get ready to make my first appearance for this famous club,” she said.

“I am looking forward to playing in the top English league as it keeps growing with not just top English and Scottish players, but players from other countries too.

“The feeling in the camp is really exciting and everyone is buzzing for the campaign to come.”