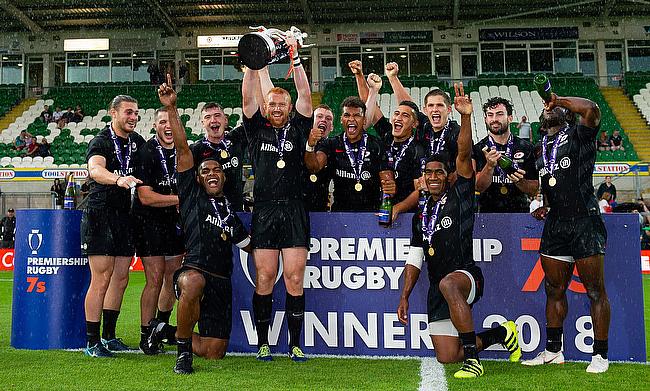 Saracens went on to clinch the Premiership Rugby 7s 2018 title after they defeated Wasps with a 33-12 margin in the final at Franklin's Gardens on Saturday.

This is Saracens' first title win since they last won in 2010 during the inaugural edition and it has denied Wasps' a hat-trick of wins after the Ricoh Arena outfit won the series in the last two seasons.

Skipper Joel Conlon gave Saracens a perfect start after capitalising on a knock-on by Will Wilson but Wasps responded back with a touchdown from Sunni Jardine as they levelled the scores. As the half-time was approaching, Saracens seized the lead with Conlon's second that was improved by Matt Gallagher as the teams headed into the break with a 12-5 margin.

Saracens extended their momentum into the second half with Tom Griffiths touching down and Gallagher improved it to make it 19-5 and further tries from Rotimi Segun and Miteli Vulikijapani ensured the Allianz Park side completed a 33-12 win despite a consolation try from Callum Sirker.

Earlier, in a tense quarter-final round, Wasps, Newcastle Falcons, Saracens and Harlequins completed 17-10, 17-12, 29-24 and 31-29 victories over Northampton, Sale Sharks, Exeter and Bath respectively.

Wasps and Saracens further extended their momentum as they defeated Newcastle and Harlequins 33-24 and 29-21 respectively in the semi-finals to reach the final of the tournament.

They've won the Plate?? at the #PremRugby7s here at Franklin's Gardens - a fine weekend for the young and exciting squad??

Finally, it's a huge congratulations?? to @WatersCalum who has been named the #PremRugby7s Player of the Tournament ????

Thoroughly deserved by the @Harlequins scrum-half after his ten tries in four games (including two hat-tricks!) ?????? pic.twitter.com/sHn9biHJLb