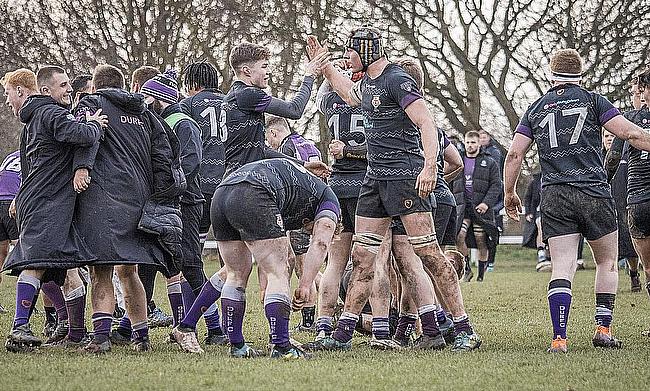 BUCS Super Rugby champions Durham University get their 2021/22 title defence underway at Cardiff Met when the new season kicks off on September 29th.

It has been 18 months since Alex Keay’s side lifted the league title, with the 19/20 campaign curtailed because of Covid-19 whilst last season was completely wiped out by the pandemic.

However, the return of the top tier of university rugby is just around the corner and it is set to be an intriguing opening round of fixtures.

The fascinating start to the season continues with the Cardiff derby the following week whilst Durham and Exeter also go head-to-head.

We can’t wait to see #BUCSSuperRugby return bigger and better than ever. Who are your favourites to take the crown? ??

“We really can’t wait for it,” Durham’s Head of Rugby Alex Keay told TRU. “Cardiff Met away is one of the best games in the season. Danny [Milton] always gets a decent bottle of red wine in but seriously, they are a great side and we are looking forward to it.

“Somebody might say, ‘Have you looked at the fixtures? ‘That is a tough start with Cardiff Met away and then Exeter at home?’ but if you can read the fixtures and tell me which is an easy game, I would be impressed!

“I guess that has always been the beauty of BUCS Super Rugby, though. We are all sat there highlighting all these good games but tell me which one isn’t a good game when you go through that fixture list?! There is not another league in rugby where you can ever say that I don’t think.”

For Durham, their coronation as champions might have been bittersweet as they were denied the opportunity to clinch a league and cup double due to the pandemic.

A chunk of their title-winning side, including the influential Ben Fowles and Henry Paremain, have now moved on and given the nature of a university rugby cycle, the challenge of rebuilding a squad and harnessing a culture has been a difficult task.

“The last 18 months have been challenging, frustrating and interesting in the sense that it has really exhausted people’s ideas meaning there will be a lot of challenges,” Keay added.

"I think we will all be going out with almost nearly new teams with a group of guys who have had hardly any rugby for 18 months, so we are all in the same boat.

“I think it has been so challenging for all the coaches because the season has now come back around again! There is, of course, that element of being excited to get started, but you do have to remember you haven’t coached intensely for 18 months. You don’t fall off a bike, but we have had to effectively start again. You always have to start again in September, but this year, probably more than ever, you are kind of starting at the basement.

“We have actually been able to keep that togetherness between coaches and students which has been really good and that will put us in good stead going forwards, but as I said, we are all in the same boat. I am not really sure how quickly we will gel, but will Loughborough gel quickly? Will Cardiff Met gel quickly? Will Exeter? I don’t know, but we are all faced with the same issues.”

Keay admits there is a sense of the unknown heading into this particular BUCS Super Rugby campaign but what the Palatinate can now prepare for is the opening block of the new season.

The North-East institution travel to all three Welsh universities in the first seven rounds of action and they also visit Exeter and Hartpury before Christmas.

But despite the tricky start on paper, the Durham boss is hoping his new crop of players can take inspiration from the title winners of 2019/20.

“Whichever way you look at it, that run isn’t easy for us!” Keay said. “It is all part and parcel of why BUCS Super Rugby is a great platform and it will be challenging to manage the squad, but at the end of the day, you have to make those long trips to be successful. Look at it this way, if you are sat in the top three after that block of fixtures, you are in a good position!

“What made our 19/20 team so great to work with was the way they hit a challenge head-on. They never sat down and thought they couldn’t rise to the challenge. It was about how we dealt with a tough fixture, losing a key player to injury, or losing one of our guys like Josh Basham if he went back to Newcastle Falcons.

"We weren’t going to turn up to Cardiff Met or wherever and throw in the towel because there were obstacles in the way.

"We talk about riding the wave at Durham. If you miss a wave, don’t panic because there is another one coming along and that is what we say to the lads. If something happens, what are you going to do about it? That group had a siege mentality which was really strong and that is the focus we want our team to have this season.”

BUCS Super Rugby has been in the shadows for the last 18 months, but the tag of champions will very much follow Durham around during the campaign.

Their first league title since 2013 is something they won’t be forgetting in a hurry and whilst Keay is still proud of the achievement, he wants the class of 21/22 to make their own memories.

He added: “It is a difficult one. I think people will still talk about us being champions, so wherever we go, it will be that much harder for us. Saying that, we have got to put a line under it. It was fantastic what we achieved with that group. They were a brilliant group, but let’s make this group even more brilliant and even better. It is time for them to make their own history.

“We have had the [Josh] Beaumont era, we have had the Ben Fowles era so now hopefully we will have the Fred Davies [Durham’s new 1st XV captain] era.”

The next chapter for Durham begins in just under seven weeks so who will follow in the footsteps of the aforementioned Beaumont and Fowles?

Having been one of the stars of @BUCSSuperRugby in recent years, @fitz_harding is now a pro player @BristolBears.

Despite the absence of BUCS competition, the North East side’s list of rugby alumni has been in the spotlight with former students Fitz Harding [Bristol Bears] and a host of Newcastle Falcons stars shining in the Gallagher Premiership.

“We are immensely proud of all our alumni like Fitz, Josh [Basham], Ben [Stevenson] etc and it just shows how big of a pathway university rugby has become and I think some Premiership clubs are realising that now and becoming more astute,” Keay added.

“Look at Harlequins’ starting back-row for the Premiership final or the players that got them there. Alex Dombrandt [Cardiff Met], Jack Kenningham [Bath] and Tom Lawday [Exeter] certainly played their part and you have Luke Nortmore [Cardiff Met] pushing Joe Marchant out onto the wing. These guys all played BUCS Super Rugby and it is the same with the lads who have recently moved on from us.

“We have talked about having a couple of alumni days so a few of them can come down, talk to the lads about how they went about it at Durham. It is all about transmitting that culture. I think it is how we use that and if we get those guys to tell this group of players they have achieved the next steps because at Durham, they did this, this and this, that is key.

“If you’re an 18, 19, 20-year-old who wants to go and play some good rugby nowadays which will assist your development and you are playing week in, week out, there is no better place than BUCS Super Rugby.”

The fixtures for the Women's National League were also announced today and inaugural winners, the University of Edinburgh, will host Northumbria on October 6th. The other opening round matches include Durham v Cardiff Met and Loughborough against Hartpury.