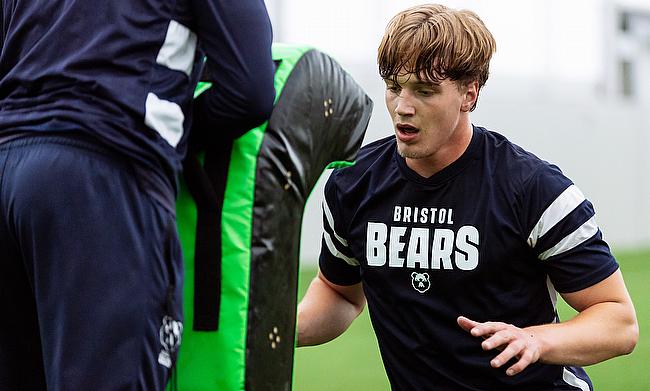 Premiership clubs unavailable to play due to Covid will be forced to forfeit match confirms Steve Diamond
Alex Goode signs long-term deal with Saracens
A Guide to Odds-On Betting in Rugby
Exclusive: Richard de Carpentier - It feels like the only people not supporting us are the RFU

Fitz Harding may have left Durham University with mixed emotions. A first BUCS Super Rugby domestic title was secured for Alex Keay’s team, but the Palatinate were deined the chance to clinch a league and cup double due to Covid-19.

Nevertheless, Harding's performances earned him a move to Bristol Bears in the Gallagher Premiership and he is now preparing for a whole new challenge after developing with an excellent Durham side.

Taking up a senior academy contract with the Ashton Gate club, Harding looks set to continue a rugby career that seemed far away when the flanker first arrived at university.

Having never played in an academy growing up, the back-rower admits that he was a late developer. Aware of the names of former students who have worn the university’s shirt and gone on to achieve professional honours, Harding owes a lot of his early successes to his time spent in the north-east.

“My main focus was getting a degree, but as I went through the years it became more of a possibility,” Harding said. “I guess, as I came into my third year, that’s when I really looked to explore my options. The uni setup was massively useful in terms of using it to improve my rugby and to get my name out there and to play at a high level week in week out.

“I remember when I came in, I was in my first year, Justin Clegg was captain and now he’s now at Worcester. It was always there that professional rugby was there for some lads. The coaches there are massively focused on trying to get you where you want to be as a player, and I think Alex Keay has been massive for that and helped push me in the right direction.”

Durham has had some tremendous successes with players graduating from their elite rugby programme into professional environments. TRU columnist Josh Beaumont is one of those players, with his Sale Sharks teammate Simon Hammersley having also played for the current league champions.

Harding could be the latest university graduate to make his name in the Premiership, following in the footsteps of Alex Dombrandt and even Bristol’s very own Harry Randall. Having seen BUCS Super Rugby grow first-hand in the last three seasons, Harding believes that the competition has been underrated as a development tool for players.

“It was only really when I arrived and started playing a bit that I saw it (professional rugby) as a possibility,” Harding said. “Quite a lot of lads, if they didn’t get contracts at 18, they'd often give up or lose focus a bit. I think uni rugby, especially the super league, is a massively useful avenue to use. Alex Dombrandt is obviously massive for the uni game because he is a great example of what BUCS Super Rugby is.

“The way he was thrown straight into the Quins first team and he is around the England setup now, I think he is a massive name. I think as more of us start to come through and more and more start getting some opportunities, I think that hopefully it will continue growing and go from strength to strength.”

Starting out in the fourth team at Durham, Harding progressed to gain honours with England Counties U20s and England Students alongside his university club commitments. At the start of this season too, he pulled on a Bristol shirt before at the Premiership 7s.

With the top-flight restart just days away now, Harding could be in line for some minutes with a packed schedule of six games in 23 days. Sides are expected to be pushed to their absolute limits in the coming weeks, which could lead to potential for injuries, meaning that academy players have been asked to stay on their toes in case there is a need for them to be called upon.

“From my point of view, I have just been focused on learning my roles and getting my detail in,” Harding said. “I think that has been the main difference I have found in the transition from uni to professional rugby, just the level of detail that goes into every second. As a senior academy, we have been told to be ready to play and to take opportunities when given them.

“There is quite a bit of pressure on us to not only push for a first team spot, but to also slip in wherever we can. For someone like me coming in with not a massive amount of experience or anything like that, we will see, but I know my stuff now. My focus is just on being able to slot in if I am needed.”

Bristol restart their Premiership campaign on Saturday afternoon as they play host to Saracens at Ashton Gate.