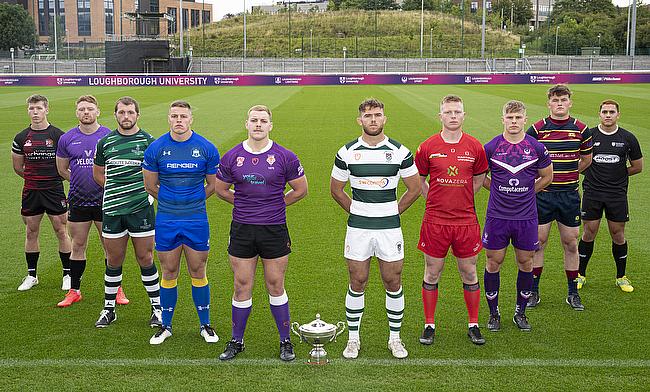 BUCS Super Rugby 2021/22 fixtures: Champions Durham begin title defence on the road
How trusting university talent has helped Harlequins challenge for the title
BUCS Super Rugby 2020/21 season cancelled due to 'unpredictable' coronavirus pandemic
Exclusive: ‘The University of Exeter are one of the reasons for my success’ - Georgia’s Lasha Jaiani

The launch day for the new BUCS Super Rugby season was dominated by the sense that the top university sides in the UK all have one thing in common.

Of the 10 teams who will be competing for the biggest prize at this level of the game - Durham, Exeter, Leeds Beckett, Cardiff Met, Loughborough, Hartpury, Swansea, Bath, Cardiff and Northumbria - all of them are faced with a blank canvas after 18 months without university rugby.

BUCS Rugby is unique because each year, teams will inevitably lose players given the nature of a university cycle, but for 2021/22 in particular, that feeling of the unknown will require sides to adapt more than ever before.

There is the worry that some teams might play at half-pace as they get used to their fast-flowing surroundings once again, but after a bleak period for everyone involved with BSR, the hunger to get back out there outweighs any tentativeness.

“We don’t know how that first hit out is going to be,” Durham 1st XV captain Fred Davies tells TRU. "The lungs and shoulders won’t thank us for that one, but we are excited!

“Speaking to the other captains, we know the league this year will be more unique than anything. We are looking at two years of fresh faces that we need to integrate straight into a team so yeah, it is a blank canvas.”

Rewind to 2019/20, and the all-round brilliance of Durham came to the fore as Alex Keay’s side put together a run of eight wins from their last nine games to clinch the BUCS Super Rugby league title - their first piece of silverware for seven years.

The North East outfit, led by the influential Dan Blackman and Ben Fowles, had the Palatinate firing on all cylinders, but with Davies now sporting the captain’s armband, it is the beginning of a new era for Durham.

“There is plenty of ambition around the place,” Davies adds. “I know we have got a bit of a target on our back after 19/20, but that adds another dimension to it.

“We are massively ambitious to grow on 19/20 and I think winning means everything so we can really build on what we have used and we know what worked in the past and maybe with some new faces, we can add some more to our game as well.”

Davies admitted it was the first time he had “touched” the BUCS Super Rugby trophy when it was on display during last month’s launch day at Loughborough, but teams like Exeter will be hoping different colour ribbons will be hanging from the handles in April.

“The truth of it is we have got two-year groups which are our freshers which are coming into us now," Exeter Head Coach Keith Fleming says. “Getting any form of continuity into their training was difficult, so we have got a whole year group that has missed out on player development and now we have got two year groups who are in the same boat but everyone has got a smile on their face and every single one of them is looking forward to getting going again.

“I think that applies to the other universities as well which means I can see it being a massively competitive BUCS Super Rugby and it could be any one of us who wins it.”

With the BUCS Super Rugby Championship final not able to take place in 2019/20 due to the first Covid-19 lockdown, the last two sides to compete for the main prize - Leeds Beckett and Hartpury - are beginning to rev their engines once again.

“For me, don’t expect too much too soon!” Leeds Beckett Rugby Programme Manager Kerry Wood jokes. “We are all excited but not only have the players not played for 18 months or so, we haven’t coached for a while so everyone is in the same boat. There will be coaches within BUCS Super Rugby who don’t know too much about their squad and we are certainly a little bit like that as well so it is a bit of push and shove to see how we go.”

“We have been involved in the past finals and it is has been very successful,” adds Hartpury head coach Dan Murphy. “Myself and Tom [Brooker - Hartpury captain] were chatting and he was at two of our three finals watching as a fresher and a second year and now he is a fourth year masters student.

“He wants to replicate Hartpury’s success [three-time winners of the Championship trophy] and I think that momentum is still a little bit in place, but also having a blank canvas and having the new guys who want to aspire to be like those who have gone before them is really infectious.”

Away from title talk, there is once again a curious sub-plot in BSR; who can be the pride of Wales? Cardiff Met have been a mainstay in the top-flight of university rugby, but both Cardiff and Swansea have joined them in recent seasons.

Excitement building for our opening @BUCSSuperRugby fixture live streamed by @BUCSsport and our very own @CMetSportTV. Players working with @MetBroadcast on green screening to prep graphics and social media content. Thanks so much to Joe, Adrian and the team for their time. pic.twitter.com/MKLGmNpV7B

“We were written off when we first came into the league in 2019,” Swansea boss Hugh Gustafson tells TRU. “People were saying we were going to be in the relegation play-off and we finished seventh above Bath, Northumbria and Cardiff Uni.

“We have got to be realistic. We are playing against teams who have been established for a long time so we are looking to compete with the top Welsh universities but also work our way up the rankings.”

“Being a realist, there are universities who are much better placed than us in BUCS Super Rugby with their programmes, but it is exciting to go up against them,” Cardiff Head of Rugby Alan Flowers, adds.

“We have had a year out, everyone has had time to work on different things but you don’t know what the other teams look like, so it is just a case of focusing on what we can do and as I said to the players, as long as what we can do is to the best of our ability, that is all we can do.”

“When the fixture list comes out, you start to look down to see when our first easy fixture is and there isn’t one and those Welsh derbies are games which are very much included in that!” Cardiff Met Director of Rugby Danny Milton says. “While I think it is a blank canvas and we don’t know where anyone is at, you know the quality of the rugby programmes.

“I think we are under no illusion that it is going to be very, very competitive and like you say, who knows which teams will come out on top, but it will be a hard-fought competition.”

Bath’s performance in 2019/20 was easy for Head of Rugby Aaron James to summarise when asked about his thoughts on the season ahead: “With it being a blank canvas, we are only as good as our last game and if we look back, it was probably a loss given we ended up eighth out of 10th so it wasn’t great!

“I said to someone the other day, it is almost like we have started again, like BUCS Super Rugby is just kicking off for the first time. We don’t know where we are in terms of form. There is no form! There is so much change, but then also the buzz of getting back into it is even higher than it was because we know what a strong competition it will be.”

Whilst the underlying theme throughout this ‘season preview’ is teams beginning with a blank canvas, you could argue Northumbria and Loughborough are the two sides who, to an extent, are starting from scratch.

Head coach Jon Benson joined Northumbria for the 2019/20 campaign and it was a year to forget for the North East institution as they ended the curtailed term bottom of the pile.

But now he has had a full pre-season to begin outlining his vision for Northumbria and the same can be said for Loughborough.

Scott Sneddon, who previously held the role of attack coach at the Hong Kong Rugby Union, was announced as Loughborough’s new Head of Rugby in December 2020 and whilst this might be his first taste of university rugby, he will be hoping to guide the Midlands outfit towards the upper reaches of BSR.

“It is the start of my third year, however in terms of how I look at it, we have actually had a proper period of time to prepare because I have never had one before with the university,” Benson says.

“We had a good reflection on how 19/20 went. As coaches, we have learnt from it. We can develop it now and hopefully put that game plan structure in place for the players to just go out and perform because that is what you want at the end of the day. We want to play a brand of rugby that everyone enjoys playing and wins us games.”

“I guess it was always going to be a reset button given what has happened over the last 18 months, but it is pretty much that blank canvas,” Sneddon adds. “For me, I have learnt a lot about university rugby since I arrived and how that works, but we have been able to put our new ideas in as a coaching team. Everything is new, there is a lot of fresh stuff apart from a handful of people who have been here before, but it is a new opportunity which I am excited for.”

So what can we conclude?

Whilst we should be assured of high-quality rugby and the usual rollercoaster ride which BUCS Super Rugby provides, the drama may take a back seat for the first couple of weeks as the best in the business settle into a new term.

All the talk of blank canvases and whether teams are up to speed will be a narrative we might have to accept in the embryonic stages of the campaign, but something which won’t fade into the shadows is the enthusiasm to have BUCS Super Rugby back.

That in itself should paint a picture of excitement in all of our minds as university’s biggest sporting competition returns on September 29th.