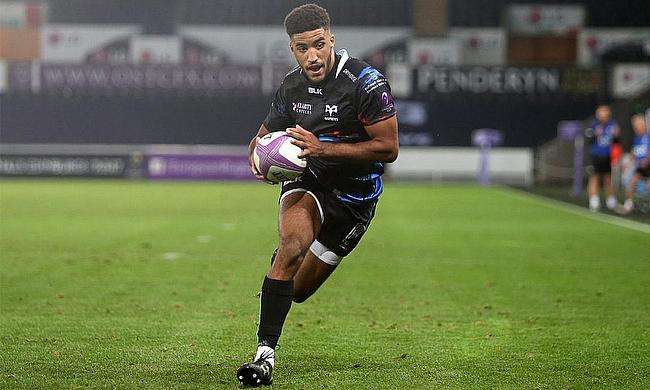 Keelan Giles has been described as "a huge talent" ahead of his possible Wales debut against Japan.

The Ospreys wing will emulate peers like George North and Tom Prydie by making his Wales bow as an 18-year-old if he features at the Principality Stadium next Saturday.

Giles, who has scored eight tries in just five games for the Ospreys this season, was recently promoted to Wales' autumn Test squad.

And the smart money is on him being involved in the match-day 23 when Japan faces Wales for a first time in Cardiff since 2007.

Wales full-back Leigh Halfpenny was 19 when he made his Test debut against South Africa eight years ago, and like Giles, came through rugby's junior ranks in the Swansea area.

"Keelan is doing well," Halfpenny said. "He has put in some fantastic performances for the Ospreys. He is a huge talent.

"I remember seeing him play one Sunday morning at mini rugby level - under-eights or under-nines, I think - and you could see there was something there.

"From my experience (Test debut), I remember the guys in the squad just made it so easy for me to come in and feel comfortable.

"They helped me with the calls and just said to go out and enjoy it, and I think that is what you have got to do. You dream of moments like that as a kid, to pull that Welsh jersey on, and you have just got to enjoy it.

"It is amazing how quickly time goes.

"It only feels like yesterday that I was the young kid coming in, but I have loved every second of it. I am just looking to keep enjoying it and keep on learning."

Wales' interim head coach Rob Howley is not due to name his starting line-up until Thursday, but it would be no surprise if he found room in the match-day group for exciting young prospects like Giles, Ospreys fly-half Sam Davies and Newport Gwent Dragons lock Cory Hill.

Wholesale changes, though, are not expected as Wales look to build on their hard-fought victory over Argentina two days ago after being crushed by Australia a week earlier, and keep momentum going as they move towards hosting South Africa in 12 days' time.

Halfpenny added: "Obviously, it was a lot happier dressing room. We were disappointed with our performance against Australia. We were looking for a reaction (against Argentina), and we certainly got that.

"But we are not getting too ahead of ourselves. We are pleased with the performance - it was important to get the win for confidence and momentum - and the focus will now turn to Japan and we will prepare well for that one.

"Australia hurt immensely. We didn't play to the standards that we set ourselves, and it was hugely disappointing, but like I said, it was a test for us as a squad to bounce back and react, and we did that.

"We are just hugely motivated as a squad to achieve and get better. We felt we improved on our performance from last week (Australia) and next week is an opportunity to improve again.

"The competition we have for places is huge. Guys are pushing each other for places, and that is a great thing for Welsh rugby."