Halfpenny kicks Wales to a narrow 24-20 win over Argentina 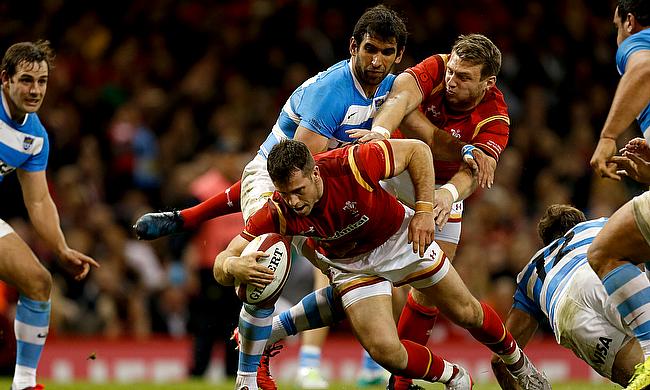 Leigh Halfpenny kicked 14 points off the tee to push Wales over to a narrow 24-20 win over Argentina at the Millennium Stadium on Saturday.

The Pumas were awarded a penalty for no clear release allowing fly-half Nicolas Sanchez to open the scoring account for the visitors.

Fullback Halfpenny's penalty on the 14th minute leveled the scoreboard for the hosts while the 23rd minute penalty handed them a slender edge.

Pumas tighthead prop Ramiro Herrera was sin-binned on the 39th minute as the hosts managed to make the most of the opportunity with a try on 43rd minute.

A great break by Dan Biggar down the right hand side followed by brilliant support from Halfpenny as he recycled it to left-wing Liam Williams who touched down for a try.

A lineout midway inside the Welsh half enabled inside-centre Juan Martin Hernandez to cross over the try line on the 47th minute as Sanchez followed it up with a successful conversion.

The hosts hung on to a single point lead before scrum-half Gareth Davies beat three defenders to touch down on the 55th minute which was followed by Halfpenny's conversion as the lead was now extended to eight points.

Argentina got back into the game with a try on 61st minute as scrum-half Martin Landajo sniped through Wales defence to score a touch down.

Sanchez's conversion once again reduced the deficit for Pumas down to just one point.

However, Halfpenny's timely 65th and 77th minute penalty proved sufficient to thwart any possible chances for the Pumas to crawl their way back into the game as the visitors succumbed to a four point defeat.

The Wales will now host Japan at the Principality Stadium in Cardiff while the Pumas will travel to the Murrayfield Stadium in Edinburgh to face Scotland next weekend.