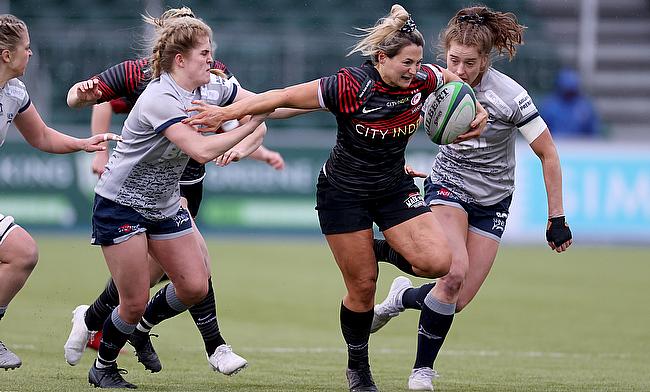 When England lifted the World Cup in 2014, then head coach Gary Street made a statement which you can argue has come to fruition.

Having been on the brink of ecstasy four years earlier, the Red Roses finally became champions of the world when they defeated Canada 21-9 in Paris.

In the aftermath of their success, Street said: “This could be a tipping point for women’s rugby worldwide”, and whilst the trailblazers of seven years ago certainly provided a platform for the sport to grow, the direction the women’s game is going in is now unignorable.

On Tuesday, World Rugby announced a new global competition in a revolutionary move that will “supercharge” the female game. From 2023, there will be an annual three-tiered competition called WXV and by introducing this structure, the opportunities for the women’s game to thrive will only increase.

Part of England’s ‘Class of 2014’ was Vicky Fleetwood. The Saracens back-row continues to be integral in the evolution of the Red Roses and after a couple of years of discussions around global calendars, the 30-year-old is excited by the plans which have now been put in place.

Speaking to TRU, Fleetwood said: “The game has come a long way since I first got capped and that was in 2011. I remember being in Canada and there were about 50 people watching one of our games and it was played at a school!

“There are still massive strides to be made at both club and international level, but with things like the global competition, I do think it is going in the right direction because we are hopefully creating a brighter future for players coming through. Those young girls who aspire to be professional rugby players, everything in five to 10 years time leading into the next World Cup and things like that, the future will hopefully be bigger and better for them then.”

"For the first time in rugby's history, a new, revolutionary women's 15s calendar"

The WXV competition is set to take place annually during a new September-October window - except in World Cup years - and teams will be placed into the respective tiers based on their finishing positions in their regional competitions, like the Six Nations.

As Fleetwood alludes to, the new format should encourage participation but WXV, and the consistency of a global calendar, will also make women’s rugby a more attractive product for potential sponsors as well as broadcasters, meaning it can reach a wider audience.

From a player’s perspective, WXV will create more Test matches, but it also means a greater number of international fixtures will have something riding on them, which Fleetwood is fully in favour of: “I guess the biggest thing is getting the best teams playing against the best teams, but then for the next tier down to be competitive so they can grow as teams and unions.

“To have some really good games across the international calendar which now have meaning, it is so important for the development of those teams. There are some where unless it is a World Cup, they aren’t getting much of that international gameplay, so it is amazing for the women’s game to be having this in place and hopefully it will continue to improve the sport.”

The launch of WXV comes a week after the postponement of the World Cup in New Zealand due to the Covid-19 pandemic, and whilst not confirmed, World Rugby's interim chief executive Alan Gilpin suggested on Tuesday that the tournament could be held across October and November next year.

Fleetwood, who has been capped 76 times by England, has her sights set on reaching a third World Cup but she was disappointed to see the competition pushed back: “So many players, not necessarily put their lives on hold, but a lot of their decisions have been around that four-year cycle. To then add another year on to that is quite tough for a lot of girls, especially us older ones!

“At the same time, I guess it gives us an opportunity and an extra year to be bigger, better, faster, stronger. I think from an England point of view, some of the young girls coming through, it should give them the opportunity to get caps and game time and it will give time to the coaches to really choose their best team. The biggest thing as well is not just having the New Zealand fans there. It is really being able to have the support of friends and family and travelling fans. That is a big thing for growing the game moving into the global competition, so I can see it from both sides.”

As we chat over the phone, Fleetwood is on her way to England training as the Red Roses continue their preparations for the rescheduled Six Nations. The competition was shifted to April because of the ongoing challenges presented by the coronavirus and the tournament will be in a reduced format with teams only playing three fixtures.

Whilst, again, this is frustrating for Fleetwood, she feels the championships could offer an early taste of what is to come for WXV: “The fact that we have got the Six Nations going ahead, although in a different format, I do think it is a good thing.

“I do think there is that opportunity for the media and fans to get behind us because it is a standalone competition this year. When it is alongside the men’s game, it is really difficult to watch all the games if you are a big rugby fan so that’s where we get that downfall where we are not getting as many people watching us as we want.

“Actually, with it being standalone, hopefully we will get those people that are rugby neutrals, are the fans of the women’s game and even fans of the men’s game, watching. We want to show everyone the kind of exciting rugby we are trying to play and hopefully we now have the opportunity to do that.”

Before England begin the defence of their Six Nations title against Scotland on 3rd April, the battle for a top-four spot in the Allianz Premier 15s is first on Fleetwood’s agenda.

The elite women’s competition has been able to continue throughout the pandemic  - with twice-weekly lateral flow Covid-19 testing aiding this process - and whilst Fleetwood has relished the fight for places in the league table, the flanker feels privileged to have been able to play across the course of the season so far.

“For me, it has been a huge thing that I have been able to keep a bit of normality,” added Fleetwood, who combines her rugby with her work as a personal trainer.

“So many people have struggled throughout the various lockdowns with gyms being closed and all that kind of stuff, but being in an elite sport, we have been really lucky that we have been able to still go to the gym, still go and see our mates and chuck a ball around and actually get to play on a weekend.

“My partner plays in National One and all of his rugby has been canned for the last 12 months so I can really see it at home that I am very fortunate to be in the position that I am.”

?? "I think that's the big thing that we want to pride ourselves on – that work rate – coming at them whether that's in attack or defence."@vickyfleetwood sees a lot of room for improvement after today's 47-18 win over Sale Sharks.#StrongerTogether ???? pic.twitter.com/7IiqsMtpbM

This term, Susie Appleby’s side have been a revelation in their first season as a club and they are currently on a seven-game winning run as they prepare to take on the champions.

The Chiefs were also the first team to beat Saracens in more than two years back in January [22-14] and with Exeter breathing down the necks of the top four, Fleetwood knows her side will be challenged on Saturday afternoon.

She added: “I think it [the battle for the top four] has been great for the league. Why would you not want it to be competitive?! Obviously, no-one likes to lose, but at the same time, going into a game knowing that it is not going to be a walkover and you are going to have to work hard for it, those are the games you want to play in.

“That means we have to go in there on top of our game and actually make sure we are focused right from the off. I don’t think we had that when we played them last time. I don’t think anyone could put their hand up and say they had a great game so we know we didn’t do ourselves any justice in that last game we played against them and we will be better this week.”