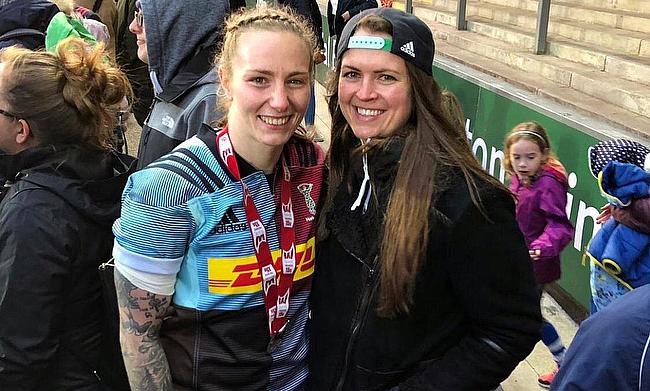 Harlequins and Scotland No.8 Jade Konkel believes strides are being made to make the LGBTQ+ community feel an inclusive part of the rugby family.

She has urged everyone involved in the sport to “keep building knowledge, listening and understanding” so that this continues to improve going forward while other inequalities in the game can be tackled at the same time.

The 27-year-old, originally from the Highlands of Scotland, was one of the panellists taking part in a fascinating webinar run by the Harlequins Foundation on Wednesday night looking at the question ‘Tackling inequality: How can rugby improve its support of the LGBTQ+ community and why does it matter?’

Supported by the club, the newly established Supporters’ Association will act as a representative voice for LGBTQ+ Harlequins supporters, their families and friends, as well as allies of the LGBTQ+ community.

During the webinar Konkel, former England player and current Chief Financial Officer at the RFU Sue Day MBE and Matt Webb, the Chairperson of the Kings Cross Steelers, who were the world’s first gay rugby club, all spoke eloquently about the question and the issues it raised.

They were also joined on the panel from the USA by New England Free Jacks’ Devin Ibañez, who recently came out as the first openly gay Major League Rugby player.

A year to the day of our inaugural LGBTQ+ Pride Game, we couldn't be prouder! ??#COYQ #LGBTHM21https://t.co/orgimyyEUD

“Devin spoke really well from a male point of view because you hear a lot from the women’s game about it being inclusive, but maybe not so much in the men’s game, so it was interesting to hear his story about openly coming out quite recently and what that has been like for him.

“Matt and the people involved with the Kings Cross Steelers are doing a great job and it was insightful to hear from him and from Sue, who I know is doing a lot of great work within the RFU around this issue, as well.

“I think for everyone involved in the game, it is about building knowledge, listening and understanding and realising that we are all different.

“For example, as a woman who identifies as gay, it could be difficult for me to understand the challenges that someone like Devin has identifying as a gay man in the same sport, but by being open and talking about it and other different issues, we can then help each other along the way and make the sport that we all love as inclusive as it can be.

“I also watched a documentary called Disclosure on Netflix the other day [where leading trans creatives and thinkers share heartfelt perspectives and analysis about Hollywood's impact on the trans community] and it touched on issues that I had never really thought about before, but now I have the knowledge to help someone through similar issues should it come up.

“As I say, it is about building knowledge. On the rugby field, you learn every time you take part in a match and off the field, we as players, coaches and supporters should be trying to learn about issues which may affect our teammates and friends.

Social media: “Think about the impact your words could have on someone else.”

We are all aware of the internet trolls out there who cause offence or discriminate against people and Konkel, who has 44 caps for her country and is a key member of the Quins’ squad, feels people have to take a step back and think before they type.

“Before you write anything on social media, just think about the impact your words could have on someone else,” she states.

“This choice of words can often impact people in a positive way and that is brilliant, but other words and phrases can hurt people and really make them feel bad and go into their shell.

“Mental health issues are an ongoing problem which are now being spoken about more and I think people sometimes forget how comments could be perceived by another person.

“It is so easy to write a comment in the spur of the moment without thinking, but it is so important to take a step back and be mindful of other people and their feelings before you post anything.”

“Being yourself means you can get the best out of yourself on and off the pitch.”

One social media post which received hundreds of positive responses came on December 29, 2019.

That was when Konkel told the world that she and her partner Helen Roberts had become engaged: “Back in the day, I was terrified to come out,” she explains. “When I was growing up in a small place [on the Black Isle peninsula], there weren’t many role models or people that you saw in the public eye who were like me.

“As a result, I felt like a bit of an outsider, and a bit weird and I didn’t really know what being gay meant so I shied away from it.

“So when I got engaged, I thought to myself that as a rugby player playing for my country in the public eye, it was something that should be shared to help others. I felt it was important to show how normal it was to be gay and to share my story.

Best way to say yes to a proposal? Whack out a ring and repeat the question because you planned the same proposal on the same day.... can’t believe she beat me to it but great minds think alike! ?
?
Best. Sunrise. Breakfast. EVER! With my fiancé.... pic.twitter.com/5J7KUXPNZq

“Society is forever evolving and it is important to show youngsters that sport and your personal life do go hand in hand and that it can be a really positive thing.

“Being yourself means you can get the best out of yourself on and off the pitch. Happiness and respect are two of the most important things in life and if by making my personal story public I have helped some other people, then that is great.”

For more information on the work the Harlequins Foundation do and future webinars, visit www.harlequins.foundation