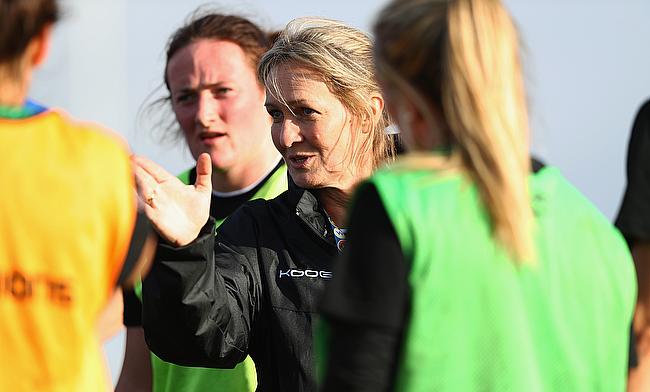 Vicky Fleetwood Exclusive: Global competition can create a brighter future for players
Canadian Rugby Union continuing to grow
Grassroots rugby in Scotland one year on: “We just can’t wait to be back on the pitch again”
Matt Symons Exclusive: Harlequins, Preparing for Life After Rugby & Playing Exeter

On Monday afternoon, both Giselle Mather and Lee Blackett were present on Wasps’ press conference.

The club's media duties were aligned as both teams are playing Sale Sharks in each of their respective domestic competitions this weekend. Something of a rarity, the call just so happened to take place on the same day a landmark deal in the world of women’s sport was gracing the back pages of the national papers.

This surrounded the FA Women’s Super League as it was confirmed England's premier women’s football competition will be shown on free-to-air TV for the first time.

The three-year agreement kicks in next season, with the BBC and Sky both broadcasting live games in a deal worth £7m-£8m per season. England and Manchester City captain Steph Houghton described it as an ‘amazing step forward’ and the general reaction to the news has been overwhelmingly positive.

Of course, for rugby fans looking at their top-flight women’s competition, the question of ‘when is this happening for us?’ is quick to leave lips and enter the world of social media and other mediums of debate.

A clear difference between the two competitions is their age. The WSL is in its 10th season, whilst the Premier 15s is in its fourth. As a result of this, rugby will always follow football in its progression, but that will never stop the comparisons pouring in.

However, when it comes to the visibility of fixtures, that is where coverage has differed the most. Periodically, Premier 15s matches have appeared on Sky Sports, but as of this season, they are being streamed live on England Rugby’s YouTube page.

It has left many fans of the women's game frustrated as fixtures often overlap, meaning they cannot watch the competition in the way they would like to. Contrast this to the Gallagher Premiership, where the kick-off times for the vast majority of matches are arranged in order to maximise the coverage by BT Sport.

It has to be wondered when a significant deal can be made to broadcast the Premier 15s and Wasps FC Ladies DoR Giselle Mather says now is the time to try and push this agenda, with the product on the pitch at such a high level.

“It is something that is being massively investigated in the women’s game at the moment,” Mather said. “I think Covid hasn’t done us any favours at all. The first three years, when it was Tyrrells, it was about the product on the field and making sure we were raising the standards of the women’s game.

“You have to have a product that needs to be put out there first and alongside that came the Red Roses and the games down at Sandy Park and up at Doncaster and they were sell-outs on both occasions.

“But this year, and the first of the AP15s, was supposed to be a lot more about the commercial area, and of course we can’t have anyone come anyway, but there is a huge amount of support and it is fabulous for women’s sport what has been announced for the football.

“They are probably, to be really honest, about five years ahead of us in terms of the commercial side. We have been involved against all the other [teams] in the top five. We have played every single one of them over the last four weeks and the games have been phenomenal, with no more than two points between them.

“The games have been fantastic, but I am really hopeful because that is exactly what the game needs, a serious broadcaster so that we can really raise its profile and encourage the youngsters, the young girls, to take up the sport.”

New television deals have been doing the rounds in the world of sport recently, perhaps the highest-profile being in the NFL, where CBS, ESPN/ABC, Fox and NBC have agreed to pay $89.5b across the next 11 years, a 108% increase when compared to the previous agreement. This will also rise to roughly $105b when the Amazon streaming deal is taken into account.

In December, BT Sport restructured their broadcast agreement with Premiership Rugby to show men’s top-flight rugby until at least 2024.

Last autumn, we even saw Amazon Prime step up to the plate to broadcast the Autumn Nations Cup and the service is widely considered as one of the next steps in how the game will be viewed.

As revealed by Fiona Thomas in The Telegraph on Tuesday, BBC iPlayer will be broadcasting the Women's Six Nations competition – with the tournament's final weekend set to be shown live on BBC Two.

It is an old yet correct saying that only by investing in something will it succeed and this, of course, is extremely pertinent to women’s rugby.

In terms of the international game, the Six Nations have secured the help of consultants to help find a title sponsor for the women’s competition, whilst CVC’s huge investment will no doubt prove fruitful in the long run.

But what about the here and now? With a week and a half to go, the Six Nations have finally confirmed their fixture details for this year's tournament and disorganisation of this proportion needs to be improved upon because it can only be damaging to the growth of the sport.

Why? Because the most important thing is making sure that families know when a game is on in order to clear their afternoons to sit in front of the television and inspire that next generation of players.

Having a broadcasting deal and a game that is consistently visible will only help with this moving forward. Football has led the way, let's hope rugby isn't too far behind.