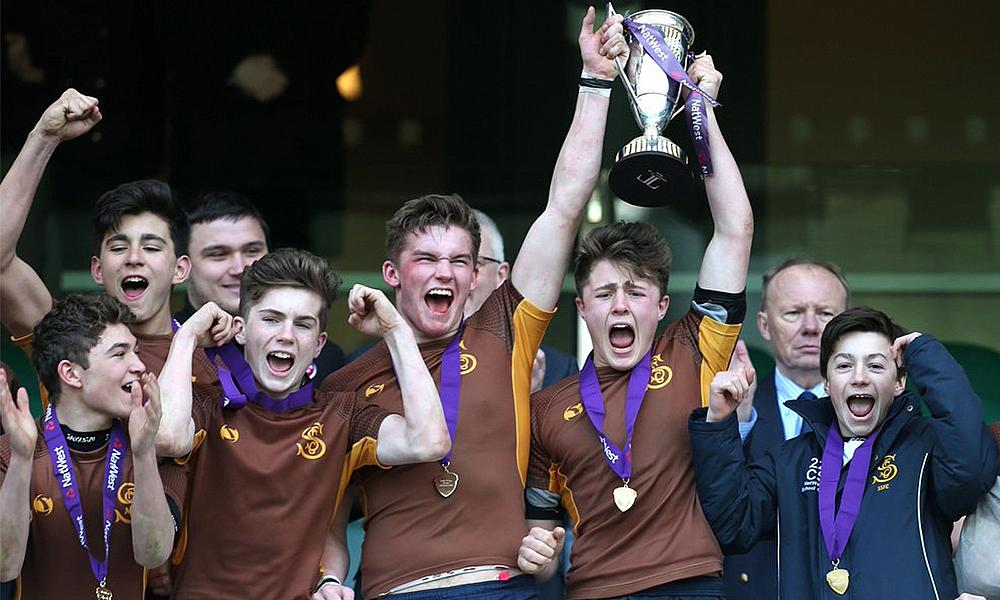 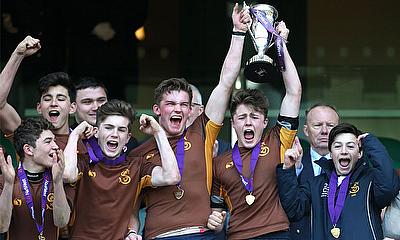 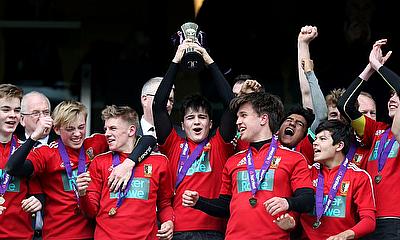 A fantastic first half performance from Sedbergh School was enough to see them lift the U15 Natwest Schools Cup at Twickenham.

Harry Hill and George Barber scored two of Sedbergh’s three tries in the 24-17 victory, while Fraser Jones’ attempt was controversially awarded by the officials.

Dr Challoner’s Grammar School secured the U15 Natwest Schools Vase in the earlier kick off, as they lifted the trophy on their first ever Twickenham outing.

A dominant performance from James Tunney saw him score a hat-trick from Number 8, while Monty Weatherall’s expertise from the tee helped see them over the line to a 19-10 win.

Will Haydon-Wood added the first points to the score board, slotting a penalty in the opening minutes to give Sedbergh a 3-point lead.

Alex Wilson crashed over in the corner almost immediately after, following a well worked kick-off and a quick tap penalty which caught Sedbergh off guard.

After turning the ball over, Sedbergh Number 8 Harry Hill barraged his way through the defence to carry home from 20 metres. Haydon-Wood converted excellently, making the score 10-7 inside 5 minutes.

Sedbergh were then controversially awarded a second try, after Fraser Jones was bought down short of the line by Wellington’s Hugo Bright, before reaching out a hand to dab down on the line but replays appeared to show the ball being held up. Haydon-Wood converted the try.

Minutes before the half-time break, the Sedbergh backs worked a slick passing move before George Barber found a gap in the Wellington to dive over the line. Haydon-Wood maintained his excellent kicking performance to add the extras.

Will Sinfield then narrowed the deficit with a penalty, before scrum-half Jamie Miller forced his way over for a converted try.

With the difference at just seven points, Sedbergh chose to pass up the opportunity of three kickable penalties in lieu of going for a fourth try, but despite not being unable to score again, they held out for a 24-17 victory.

To open the scoring, Dr Challoner’s Number 8 James Tunney scored his first of three tries after finding himself wide on the left, before diving in to the corner to round off a great passing move.

After missing an early penalty attempt from distance, fly-half Monty Weatherall added the extras from the touchline.

Moments before half time, James Tunney scored his second of the game after bursting through the Sir Thomas Rich’s defence to go over emphatically under the posts. Weatherall converted with the last kick of the half, making the score 14-3.

Sir Thomas Rich’s then went close a number of times before being held up, and from the resulting scrum Walker found Matthew Lampitt running a great angle to carry over, before the fly-half added the conversion.

With ten minutes left on the clock, James Tunney carried from the back of a scrum to score from 20 metres out, completing his hat-trick at the home of English rugby.

Weatherall’s final attempt at the posts was sliced wide, but his side saw out the 19-10 victory to seal victory in the final of the U15 Natwest Schools Vase.