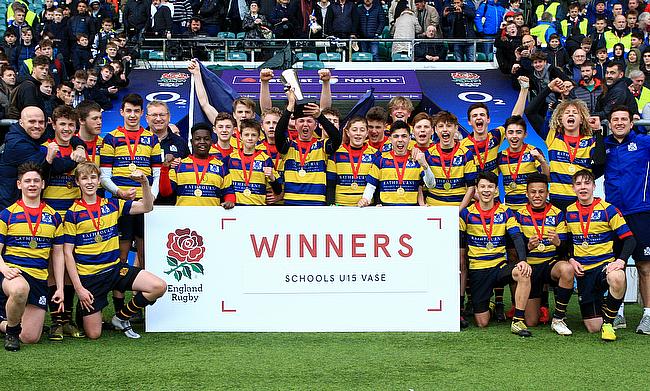 Fawcett at the double as Warwick defend Under 18s Cup title

Kenilworth School scored two tries at Twickenham in a 36-14 defeat to Beechen Cliff School in the final of the U15s Schools Vase. Kenilworth went into the break just 12-7 down before taking the lead early in the second half but a hat trick from Will Morris set Beechen Cliff on their way to victory, writes Sophie Freestone.

In a match that saw the momentum swing between to the two schools, the Leyes Lane side withstood an early attack from Beechen Cliff in the opening stages of the contest, kicking loose ball out of their own 22. They then turned that pressure in defence to pressure in attack, making their way deep into the Beechen Cliff half before the Bath school returned to Kenilworth territory.

Ten minutes into the match fly half Ollie de Glanville, son of former England centre Phil, was on hand to receive a slick offload inside the Kenilworth 22, slipping through the defence to score the game’s opening try. Captain Jac Therrien added the extras to give his side a 7-0 lead.

Kenilworth responded almost immediately, however, working their way into the Beechen Cliff 22 before being driven into touch just five metres out. With 16 minutes on the clock, their efforts were rewarded following some excellent work from the forwards just five metres from the line, with captain Josh Marsden going over to open his side’s account. Fly half Will Woolvine’s successful conversion levelled the scores.

After the restart Kenilworth were back on the attack, almost scoring again before a well-timed interception from Charlie Delargy saw the winger race down the right wing to score his side’s second of the match and nudge Beechen Cliff into a 12-7 lead.

That score saw the momentum swing into Beechen Cliff’s favour but Kenilworth’s strong defence prevented any further first half scores, with the Somerset side superbly tackled into touch on two occasions.

Having finished the first half strongly with some excellent defensive work, Kenilworth started the second half brightly in attack with Finn Yallop scoring just two minutes in. The centre showed real strength to shrug off the Beechen Cliff defence to level the scores. The conversion from Woolvine made the score 14-12 as Kenilworth took the lead for the first time.

It wasn’t long before Beechen Cliff were back in front, however, with the ball shipped out wide to centre Morris who crossed in the corner for his first of the match. Therrien converted to restore his side’s five-point advantage. Morris was then back on the score sheet after 48 minutes, this time taking advantage of loose ball in the Kenilworth in-goal area to touch down and extend his side’s lead to 10 points.

After a great break from Kenilworth and subsequent penalties that took them deep into the opposition 22, Beechen Cliff overcame the pressure before Morris secured his Twickenham hat trick. The centre was on hand to touch down after Daniel Boyle was superbly brought down by Kenilworth just inches short of the line. That score put his side 29-14 up with just under ten minutes to play before a sixth try through replacement Yuji Westmacott, converted by Therrien, gave Beechen Cliff a 36-14 victory.

“I'm so proud of the lads today. We really put our heads down and it was a tough game; their forwards were outstanding.

“It's been an unbelievable experience and we'll remember it for the rest of our lives. We just feel honoured that we had to chance to play here.”