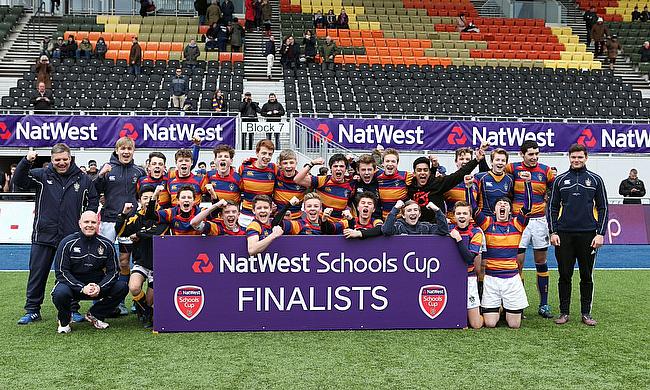 With the semi-finals of the Vase being played on Sunday, winners Dr Challoner’s Grammar School and Sir Thomas Rich’s School will go head to head in the final of the Natwest Schools U15s Vase.

In the 11am kick off at Allianz Park, Dr Challoner’s put in a dominant performance against Bridgewater High School to secure a 41-12 victory.

The tournament will culminate on finals day at Twickenham on Wednesday 16th March, as Dr Challoner’s face 2012 runners up Sir Thomas Rich’s to compete for the Natwest Schools U15s Vase.

The scoring was opened after just 4 minutes in the first of the two semi-finals, as Blake Morris found Wasps’ academy player Huey Chadwick with a long pass, allowing him to set up Ollie Anderson to dive for the corner.

Monty Weatherall begun his exquisite afternoon from the tee with a sensational conversion from a tight angle.

After a great carry from number 8 James Tunney, Huey Chadwick took the chance to go over the whitewash himself to double Dr Challoner’s lead. Yet again, Weatherall converted expertly from an identical position.

Moments before the break however, Bridgewater were able to halve the deficit after great handling from Jake Hibbert allowed him to sprint home unchallenged. Full-back Oliver Brown slotted the conversion with ease.

With the final kick of the half, Weatherall slotted a penalty to add three more points to their total, taking the sides in at half time with the score at 17-7.

Shortly after the break, the Dr Challoner’s fly-half continued his fine kicking display, this time sending an up-and-under out to the left wing allowing Tunney to collect in air, before running home to get his name on the score sheet. Weatherall then converted the most impressive attempt of his four from out wide.

After great work in the ruck, Dr Challoner’s were able to turn possession over inside Bridgewater’s 5 metre line, before Jake Wilkins scored from close range to extend his side’s lead. Despite his impeccable display, Weatherall missed the relatively simple conversion.

Prop Sid Dey then showed some impressive pace to make a break for the corner, before finding Ed Griffiths inside to score Dr Challoner’s fifth try of the game after 42 minutes.

10 minutes later, great hands from both Dey and Richard Dean opened up space for Tunney to run home his second of the game, rounding of a man-of-the-match performance from the number 8. Weatherall added the extras from the tee.

The final score of the game came from Bridgewater however, as they looked to go out valiantly with Cole Oakley making a great break, before finding Jack Rigby on the left wing to go over in the corner.

Speaking after the 41-12 victory, Dr Challoner’s’ Head of Rugby Chris Duggan expressed his delight: “I’m absolute over the moon for the boys – the school, the parents, and everyone that’s been here to support us. They’ve been amazing all year.”

“The good thing from my perspective is that they didn’t shy away from any physicality that Bridgewater brought, which they did. It was something I was wary of but the boys were brilliant.”

An early driving maul from Sir Thomas Rich’s saw them open the scoring after 2 minutes, as hooker Cameron Wilkinson touched the ball down following a powerful push from his fellow forwards. Fly-half Daniel Walker slotted the conversion.

They soon scored their second, as a sensational offload out the back from Walker found left wing Luke Pardoe perfectly, gifting him the opportunity to dive for the corner. This time, Walker’s kick didn’t have the legs to reach the posts.

Sir Thomas Rich’s then scored their third after 13 minutes, as they gained ground little and often from the rucks before Joe Hocking stretched out an arm having originally been stopped short of the line.

To atone for his two previous errors from the tee, Walker expertly slotted a penalty from nearly 50 metres out, taking the score to 20-0.

Ensuring they didn’t go in to the break scoreless however, Bishop Vesey’s scored a try of their own and Harrison Casey played a great one-two with Brogan Ling, before darting for the line to slide over the whitewash. Ling failed to convert.

A second half penalty from Walker was succeeded by a strong Bishop Vesey’s scrum, allowing Daniel Black to find Ling who made a beeline for the posts, crashing between them before converting the try himself.

With the final score of the half, Casey was set up for his second try of the match by captain Louis Hanlan, after a great show of pace from scrum-half Black. Ling added the extras, but it was too little too late for the Midlanders.

“They like to give me a heart attack, and I haven’t got any more hair to lose!” explained Morgan Davies.

The head coach then looked ahead to his side’s outing at Twickenham in 9 days’ time: “I’ll change absolutely nothing [for the final]. I’m not a believer in tinkering with things for the sake of it – I did that last year and we lost!”

The Natwest Schools U15s Vase will have a new winner come March 16th, as 2012 finalist’s