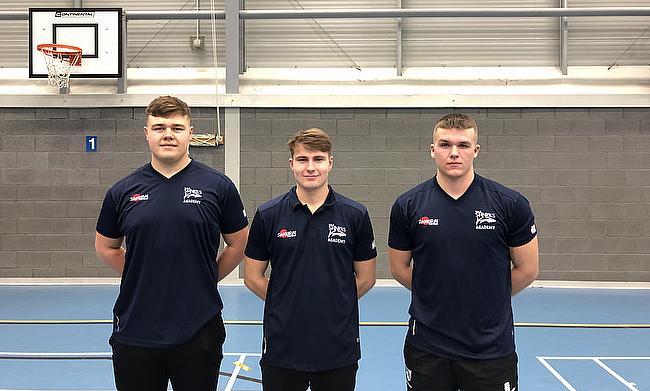 South Argyll and Oban High School ready for Murrayfield
Edinburgh's Callum Atkinson is beginning to make the grade in the professional game
"At the time, it was one of the worst things that could have happened."
Sam James: 'England call-up was a big surprise and a massive honour, but I still have to improve'

Harry Oliver, Harry Harding and Harris Fishwick - discuss their progression at Wilmslow, following in the footsteps of others and why Sale Sharks can be their next step.

It’s a Friday afternoon at Wilmslow High School and PE teacher Nathan Rushton has just asked three pupils to step into his office.

When this happens, a spell in detention could be one of the possibilities, but in this instance, it couldn’t be further from the truth as Harry Oliver, Harry Harding and Harris Fishwick are the students in question.

The trio take their seats next to the school sports hall where pictures of Great Britain sprinter Seren Bundy-Davies are displayed. The 23-year-old is just one of many former Wilmslow High graduates who have gone on to pursue a career in professional sport and rugby sits right at the very top of that list.

Players such as Sam and Luke James, Tom Cruse and Tom Hudson all plied their trade at Wilmslow before signing contracts with Gallagher Premiership clubs. In terms of the James brothers, Sale Sharks was their destination and for Oliver (centre), Harding (prop) and Fishwick (lock), they are aiming to follow the same path.

Our build-up to the new #GallagherPrem season continues this week and we begin with an interview with @gloucesterrugby's Tom Hudson.

Many will know about his remarkable journey to Kingsholm and now he is ready to impress for the Cherry and Whites. pic.twitter.com/tmu6TVGx5D

“It is motivating,” Fishwick says. “They came from Wilmslow High School and we are now in the same position they were with all three of us being in Sale’s academy. There isn’t any reason why we can’t do the same.”

Oliver, Harding and Fishwick, who are all part of Wilmslow High’s 1st XV side, are extremely down to earth. Humble and easy-going, they speak like players with a vast amount of experience under their belts despite being just 17-years-old. On and off the pitch, they are good friends and now they all share the common goal of taking the next step in the game.

For Oliver and Harding, this is their final year at Wilmslow, but they have known each other for over a decade. Macclesfield Rugby Club has been their home since under-6 level and Harding put some of his development down to his time at Priory Park.

“We are playing Colts at the minute,” he says. “We won the ‘B’ League last season and now we are in the ‘A’ league and that is more progression as a player really.” Oliver adds: “In this Wilmslow High team, there are six of us who play for Macc on a Sunday so we do know each other really well and it is nice to play alongside each other. Our parents used to play at Macclesfield as well so that connection is still there!”

Fishwick is Wilmslow through and through having played for local club Wilmslow Wolves, but since the beginning of last season, the trio have been highly influential for their school side. The familiarity between the three players grew in the summer when, after a successful campaign for Wilmslow High, they were all selected to represent Sale Sharks U18s at the Wellington Festival.

“We went up to Wellington and it was a good week as a team,” says Fishwick who was first to initially join up with Sale. “It gave us a chance to get closer to the boys that you don’t really speak to during training in the week and that was really good.

“It was a great taster,” Harding continues. “I have never really experienced anything like that. It was a bit more of step-up, but it was a good step-up. We all feel like we have progressed as players from U16s to U18s. It is clear that the Sale stuff is helping. We are bringing that experience into the school team and trying to help with the success of that.”

The impression is Oliver, Harding and Fishwick are thoroughly enjoying their rugby and while they sit in his office, it is clear that 1st XV coach, Rushton, holds the trio in high regard. “Sale are always interested in Wilmslow pedigree players because of the links with the James brothers going through,” says Rushton who joined Wilmslow three years ago. 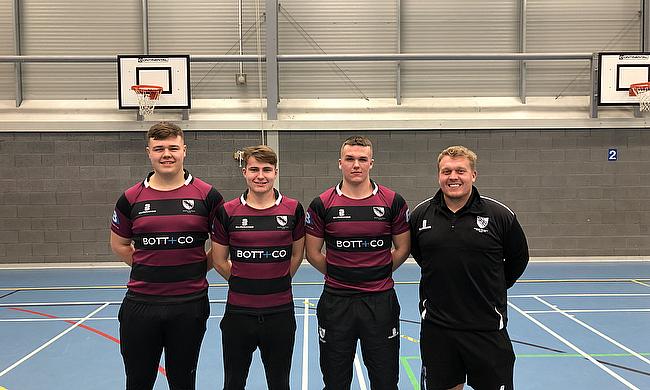 Rushton says Sale are always interested in Wilmslow players following the success the school has had over the last 10 years. Photograph: TRU

“Warren Spragg [Sale Academy Coach] and Noel Speed [Coach – Lead of Sale’s Developing Player Programme and Development Group] are always asking who is playing well on a regular basis. They picked up Harris last year and at the end of last season, they asked about other players and both Harry’s managed to get involved with the academy system which shows that our squad is improving. We do see it as another conveyor belt! We have got some really exciting Year 11’s coming through as well and as a coach, that is really positive for me.”

In terms of rugby, there always is a sense of pride surrounding Wilmslow when it comes to team achievements and the development of players purely because they are a state school. In the last few years, they have performed extremely well in the National Cup competition [NatWest Cup] as well as the Cheshire Cup against other private and grammar schools and both Oliver and his coach Rushton remark about how positive that is.

“We do compete with these ‘top’ schools,” Oliver says. “We are on Sedbergh’s fixture list for example so it just shows that we are a solid school which punches above its weight, but is competitive.”

“Because we are state school rugby, our budget that we get from PE has to cover all the sport,” adds Rushton. “We have been very fortunate that for the past couple of seasons, a small number of parents and a local company called Bott and Co, have sponsored our rugby teams, which has really helped us to. Without the sponsorship like that, we would not be able to give the opportunity to these boys to play on a Wednesday and Saturday especially when we going up to places like Sedbergh and Lancaster.

“People think ‘your Wilmslow High School’, but it is not as simple as that. Because we are a state school, you only get so much money. It is that sponsorship and parent support which we really rely on and hopefully that can carry on so we can play on a national pedestal for years to come.”

This season, success is still on the cards for Wilmslow. Following a narrow 12-9 defeat against Wirral Grammar School in the last 16 of the NatWest Cup, they now have the chance to avenge that loss against the same opposition after progressing to next year’s Cheshire Cup Final.

Wilmslow beat Lymm High School 31-7 in the semi-finals and now they have the opportunity to lift the trophy for the first time since 2015. “I think we have performed well,” says Oliver. “Whilst I have been in the first team for the last two seasons, we have always got to the semi-final and narrowly lost to Lymm so it has been good in that competition so far and hopefully we can go on and win that.

“We have a strong first team this year and we are looking to win it,” Fishwick adds. “With me being in my first year and with these lads in their second year of Sixth Form, it gives us a chance to do something together because we have played alongside one another and created that bond.”

That bond which the trio have at Wilmslow will come to an end next summer as Oliver and Harding complete their BTEC courses while Fishwick enters his final year. However, all three are hoping their progression at Sale will continue beyond their time at school and if the past is anything to go by, their respective journeys into professional sport are only just beginning. “It would be nice to say in few years that I have been able to influence a few of these boys a bit,” says Rushton. “It is about giving them the best opportunity we can.”

Josh Beaumont Column: Sale return, a trip to Bristol and the key battleground in the Six Nations