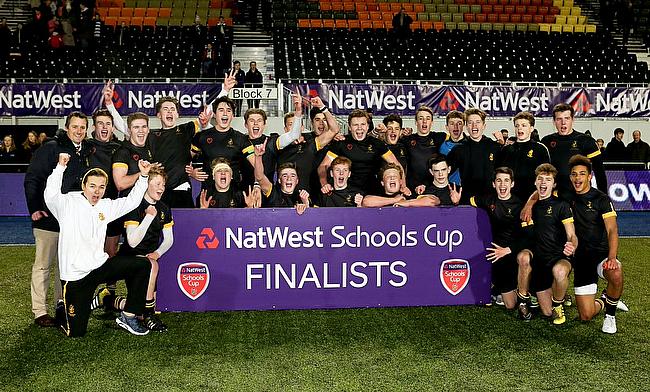 With the second semi-finals day being played out at Allianz Park on Sunday, it will be Sedbergh School facing Wellington College at Twickenham to battle it out for the Natwest U15s Cup.

In the first of the two ties, Sedbergh School fought back against Millfield School to secure a narrow victory by 13 points to 10 at Allianz Park.

In the later kick off, Wellington College scored the only try in the game to secure a 7-3 victory over Warwick School.

The Natwest Schools Cup finals will be decided on finals day at Twickenham on Wednesday 16th March, with Sedbergh making their first appearance in the final against two-time winners Wellington.

It took just 3 minutes for Millfield’s outside centre Josh Gillespie to find a gap in the Sedbergh backs, before running home just to the right of the posts allowing Adebayo Karim to convert with ease.

However, a strong scrum 5 metres out for Sedbergh allowed number 8 Harry Hill to pick the ball up and dive for the line on the 10-minute mark. Unfortunately, Will Wood was not able to bring the scores level with his conversion.

Just before the break, Karim tidily slotted a penalty to take Millfield’s lead to 10 points to 5 over Sedbergh.

With just 10 minutes remaining in the second half, Sedbergh pressed towards the try line, before lock Taran Stewart scored from close range out wide.

Karim’s conversion was not successful, bringing the sides level as it stood.

It was left to Will Wood to seal the victory with the final kick of the game, and he slotted calmly from 20 metres in front of the posts to not only ensure victory, but also a trip to Twickenham.

After the game, Sedbergh Head of Rugby Chris Swainson said: “We’re just delighted, what a great game of rugby from two great sides!”

“If we stick with teams, we know we’ve got enough to get by in that final quarter of the game,” he added, when talking about his team coming from behind in the tie.

“I’m just happy it’s not a draw, that would’ve been a horrible way for Millfield to go out. I’m over the moon for our boys.”

The first chance to open the scoring came from the boot of Wellington’s Will Sinfield, whose penalty attempt from wide on the left struck the post from a considerable distance out.

However, it was Warwick who took the lead through Henry Mortimer, who converted a straight forward penalty from in front of the posts after 20 minutes.

Early in the second half Wellington struck back, and after the attacking decision to go for a scrum inside Warwick’s 22, the ball found its way to inside centre Ross Hanekom to sprint home and dab down. To extend their lead, Sinfield converted with ease.

The low scoring encounter finished at 7-3 in Sedbergh’s favour, and their Head of Rugby, and ex-Canada captain Kevin Tkachuk, said: “It wasn’t the most compelling spectacle of attacking rugby, but that’s because the teams work so hard in defence.”

“Credit to Warwick, they worked very hard and made us work for everything we got today,” he added.

“It’s fantastic for the boy to have worked so hard all year, to now have a chance at winning a championship at the home of rugby. I know they’ll be buzzing about it.”

Wellington go in to the final having won this trophy in 2000 and 2008, while Sedbergh will make their first ever appearance at Twickenham on Wednesday, March 16th.