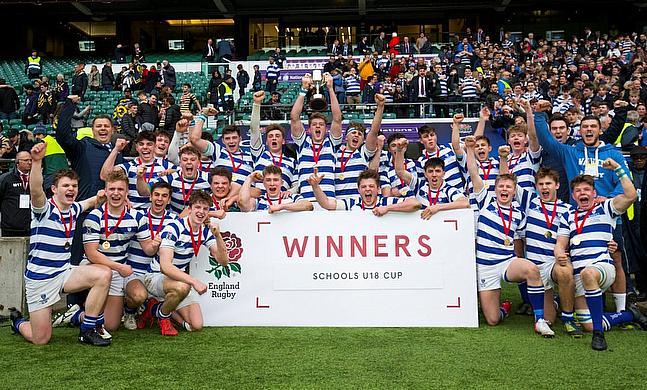 From Plymouth via Hong Kong and France, Matt Worley is ready to take his chance in England
Will Butler on life with England U20s and Worcester
Fawcett at the double as Warwick defend Under 18s Cup title
NatWest Schools Cup a great competition to be involved with says Kvesic

The teenager recently penned a senior academy contract with the Premiership side after an excellent 2017/18 campaign.

Last season is one Tom Fawcett won’t be forgetting in a hurry.

At the age of 18, most aspiring players in the game have their sights set on making an impact, but the Worcester back-rower has already grabbed headlines.

Fawcett is yet to burst on to the scene at Sixways, but what he has achieved over the last 12 months suggests it won’t be too long before that occurs.

Last year, his development continued with Worcester U18s, but it was his time away from his parent club which put him into the spotlight.

International recognition with England U18s as well as England Sevens at the Commonwealth Youth Games maintained his progress and with his school side, Warwick, he led by example.

He skippered them to the NatWest Schools Cup for the second year on the trot and also scored twice at Twickenham as he ended his time with Warwick on a major high. A year to remember for Fawcett was then capped off by signing a senior academy contract with Worcester.

“I think the experiences I have had so far has helped with my development,” Fawcett said.

“Playing for England was great because you get to play with players from places like Exeter and all over the country and that is definitely a good thing for me.

“I just want to keep learning. It is great that I have signed on with Worcester because I have been with the club since Under-12s and I am looking forward to continuing to work hard.”

Two standout moments in 2017/18 for Fawcett were winning a silver medal with England Sevens in the Bahamas and also guiding Warwick to Twickenham glory once again.

Captain of @WarwickRugby 1st XV, Tom Fawcett, was interviewed at Twickenham after the team were crowned @SchoolsCup U18 National Champions - again! He spoke about the great team performance and of team values. pic.twitter.com/rzGZeA5P8q

“Going to the Bahamas was unbelievable,” he said. “As a squad we were relatively new, but we came together and performed well.

“It was great to experience that sort of rugby at that level. I know we didn’t win gold, but as a player, I learnt so much which I can take into this year.

“With Warwick, it was great to end like that. I have to thank all the coaches and players because everyone contributed to us winning that final. The school has good links with Worcester and it has been great for both my education and rugby and I can’t thank them enough.”

With his A-Levels complete, Fawcett’s undivided attention is on Worcester for this upcoming season, but despite taking the next step up to the senior academy, he is not getting ahead of himself.

The #PremRugby7s is a breeding ground for the world's best players, including this lot ??

His aim is to try and play his way into the A League side and he has the opportunity to showcase his abilities this weekend when Worcester compete in the Premiership 7s at Franklin’s Gardens, live on BT Sport.

“Getting the opportunity to impress in front of the BT cameras, but more importantly your teammates and coaches, is fantastic,” he added.

“We are raring to give the Premiership 7s a good go and it is great to be part of the team.

“The club have brought in a lot of talent this summer which only adds to the exciting direction we are going in. I just want to focus on playing as much as I can and hopefully my opportunities will come.”