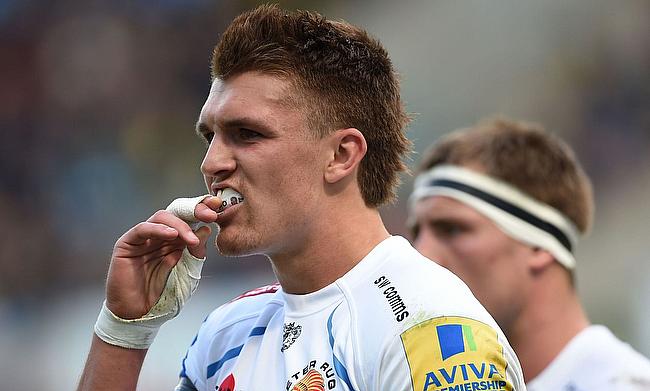 Henry Slade scored a double as Exeter Chiefs came from behind to beat 14-man Sale Sharks 25-15 in the third round of the Gallagher Premiership at AJ Bell Stadium on Sunday.

This is the first win for Exeter in three games as they are at 10th place in the table with five points while Sale Sharks are at sixth with seven points.

The Chiefs managed to include the services of Stuart Hogg for the encounter but it was Sale Sharks, who opened their account first as Ross Harrison touched down at the back of a line out for his second try in his career in the 6th minute and Robert du Preez followed with a conversion and a penalty kick in the 12th minute making 10-0.

Slade led Exeter's charge as they won a penalty kick that was kicked to perfection in the 18th minute reducing the arrears to seven points. The England centre was once again on the spotlight as on the brink of half-time Hogg brilliantly set up Slade to dot down and with him also kicking the conversion the teams were unseparated with a scoreline of 10-10 at the end of the opening half.

Slade continued his momentum in the second half as he slotted a 45m penalty kick to put Rob Baxter's men in the lead for the first time and Sale thought they had their first points after the break through Cameron Neild but the try was disallowed as he strayed offside.

By the 52nd minute, Sale's chances took a major dent as they lost Janse van Rensburg to red card as his shoulder made contact with the jaws of Harvey Skinner and the Chiefs immediately made use of the numerical advantage with Slade completing his second try in the 54th minute and Will Witty followed the suit four minutes later to make it 10-25.

Even though Ewan Ashman's try in the 70th minute gave glimmer of hope for Sale, they could not make any more breakthroughs as they succumbed to a 10-point defeat.