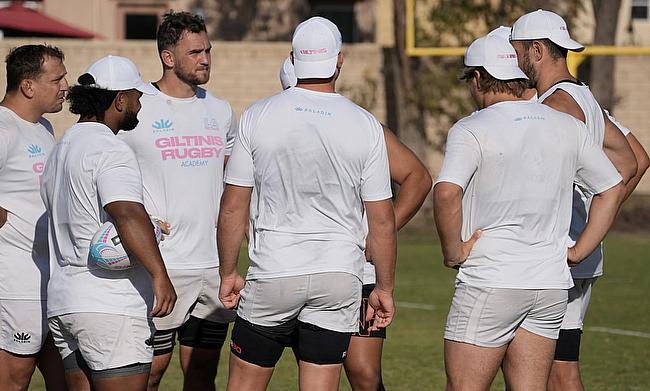 While most of the chat in rugby circles north of the border has been about Stuart Hogg starting at stand-off against Italy, a crop of Scots - and others with Scottish connections - have been preparing for the beginning of the Major League Rugby season in the USA.

The action will then conclude on Sunday when Old Glory DC visit NOLA Gold and after Seattle won the title in the first two years of the MLR in 2018 and 2019, this season will be tough to call.

That is because there are a lot of new players dotted around the league while ever-growing franchises like the LA Giltinis have invested heavily.

In the Giltinis squad are the likes of experienced backs Adam Ashley-Cooper (121 caps for Australia) and ex-Glasgow Warriors man DTH van der Merwe (61 caps for Canada).

Their squad also includes Langilangi Haupeakui who had a brief spell with Glasgow, while Scots Adam Ashe and Glenn Bryce are in there too.

“It has been a whirlwind few weeks getting to know everyone in the squad and getting settled over here in a different culture, but it is definitely something I want to embrace,” 27-year-old back-rower Ashe, who has six Scotland caps to his name, told TRU.

“The owners and the coaches at the club here are very driven and want to do well so as a group of players, we have to gel together quickly and be able to hit the ground running in round one this coming weekend.

“Over the last couple of weeks, things have been coming together nicely and while it is great to have experienced guys like Adam and DTH here for what they will do on the field, they have also been invaluable off the field because they have been in enough dressing rooms around the world to know how to bond guys together quickly.

“As we are a new playing group, we have mainly been focusing on ourselves, but we know that New England will be keen to get off to a winning start and it will be nice for myself and Glenn to catch up with Dougie Fife.”

Dougie Fife: “I’ve never been more ready for a different challenge and change of scenery”

The game between the Giltinis and New England will be played at the amazing Los Angeles Memorial Coliseum Stadium and back three players Bryce and Fife are very good friends having previously been Scotland Sevens teammates.

They will likely be in opposition on Saturday and 30-year-old New England winger Fife, who has won eight full Scotland caps, said: “Glenn is a close mate and we chat often.

“It would be pretty cool and make the day even more special if we both make our MLR debuts against each other at the Coliseum Stadium.

“Our team is shaping up well. We have a big physical pack of forwards and the backline really excites me with players like [Fijian] Poasa Waqanibau and [New Zealanders] Beaudein Waaka and Harrison Boyle in there, to name just a few.

“A lot of the players are foreigners living in Boston away from family so we spend almost all day every day together. It’s a really tight group already.

“I’ve never been more ready for a different challenge and change of scenery. This is an amazing opportunity to live in America and travel around America playing rugby and representing one of the most, if not the most, successful sporting areas in the country.”

Fife’s fellow Scot Sean Yacoubian, who came through the ranks at Glasgow Hawks, is in the Free Jacks squad but is currently out of action with a broken hand.

Steven Longwell: “I want to test myself in a different environment”

Former Hillhead/Jordanhill West of Scotland, Dundee HSFP and Ayr prop Steven Longwell is in the Old Glory DC squad having spent the latter part of last year training with the Watsonians Super6 side in Edinburgh when restrictions allowed.

During 2019/20, he played for Verona in Italy while he has several Scotland Club XV caps to his name.

“I am excited to have signed a contract with Old Glory and it is great to be over here. I want to test myself in a different environment,” Longwell said.

“There are some big names playing in the league now while every club has players in it from around the world, so it will be really interesting to see what style of play most teams go with.

“Each game will be a new adventure against new opponents for me and I am just keen to get stuck in now.”

"With redemption on its mind after the club’s only loss last year, Old Glory DC was granted its wish to start the 2021 season back in New Orleans this weekend."

Co-Captain of the Washington-based outfit is back-row Mingo Mason, the man who previously had a contract at Edinburgh Rugby and was 13th man for Scotland in a couple of World Series Sevens events in late 2018.

Ex-Glasgow Warriors back-row Callum Gibbins is in their ranks with the Kiwi also fulfilling a role as an assistant coach, while Jack Iscaro, who trained with Glasgow in 2019, is also in the playing squad.

John Manson, who earned one full cap for Scotland in 1995, is the club’s Operations Manager.

Elsewhere, Aberdeen-born back Kieran Farmer is in the Houston SaberCats squad while two former Glasgow players - German internationalist Hagen Schulte and Canada’s Djustice Sears-Duru - are with Utah and Seattle, respectively.

Scott Murray, who is fourth on Scotland’s all-time record cap holders list with 87, is part of the coaching unit at the San Diego Legion and Tane Jericevich, who played for Garioch, Aberdeen Grammar and others, is helping to coach the Austin Gilgronis.

Finally, Scottish hooker James Malcolm was due to be playing for the Dallas Jackals, but they have deferred entry to the league until 2022. It is yet to be confirmed which club he will be playing for in the MLR this year, but we understand he will be involved in the competition all being well.