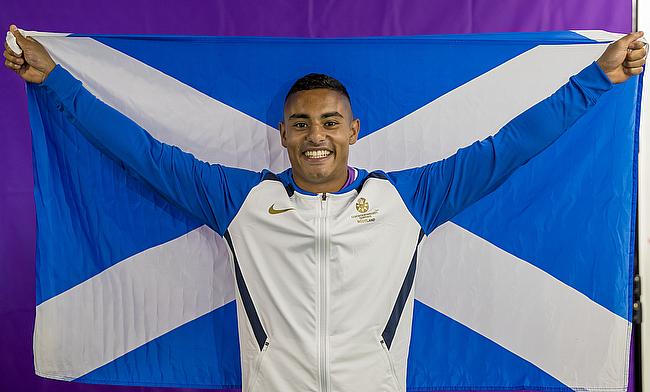 Lauren Torley Exclusive: “It has been a crazy few months - I am just embracing it all”
Exclusive: Brady Rush’s “main motivation” to play in Premier Rugby Sevens after Commonwealth Games disappointment
Jamie Adamson Exclusive: “As far as sevens seasons go, it is a big year”
Jamie Farndale Exclusive: “It’s all I’ve thought about since missing out on Rio”

Sevens is all about entertainment and Kaleem Barreto is certainly a player who likes to put on a show.

Barreto, the 23-year-old former Glenalmond College pupil who was born in Portugal, has always been known as a livewire scrum-half in the XVs game ever since he broke through into the Scottish age-grade teams in his teens.

A former member of the Glasgow Warriors Academy, he has had stints playing for Glasgow Hawks and Marr in ‘clubland’ as well as with Stade Niçois in France as part of Scottish Rugby’s link-up with that lower league club.

A few months before he went to France in the Autumn of 2019, he played for Scotland in the London and Paris legs at the end of the HSBC World Sevens Series for 2018/19 and bagged four tries over the fortnight.

That was a glimpse of what he could do in the abbreviated game and, after being one of the standout XVs players in the FOSROC Super6 in 2021 for the Boroughmuir Bears, when new Scotland Sevens head coach Ciaran Beattie was putting together his core squad for the 2022 campaign, Barreto was one of the first names on the list.

He has certainly repaid that faith having stepped up into a leadership role behind experienced skipper Jamie Farndale in recent months.

And while we do not know exactly how the Great Britain squad will look when they take over from Scotland, England and Wales on the World Sevens Series circuit later this year, it would be fair to assume that Barreto will certainly be in the mix.

He is an intelligent rugby player who is a very slick passer and has an eye for a gap and those who have not seen him play will be able to watch him turning out for Team Scotland at the Commonwealth Games in Birmingham this coming weekend.

“It is a very special moment for me to be going to the Commonwealth Games with Team Scotland,” Barreto told TRU.

“This time last year I didn’t know where my rugby journey was going to take me, so to be getting ready for Birmingham now and to be part of a multi-sport games is a surreal, but exciting time.

“Over the last few months, I think that we have steadily built as a squad and we will be looking to really compete for a medal at the Games.

“It has certainly been a whirlwind few months since I was handed a contract with Scotland Sevens and began playing regularly on the World Sevens Series.”

“I have felt more at home in the sevens environment”

As mentioned, Barreto was involved in two top level sevens tournaments for Scotland just over three years ago, but then he was a Warriors Academy player pulled into things for experience and due to injuries to other players.

Now he is the heartbeat of Scotland’s attacking game and he adds: “I had played two tournaments before back in 2019, but I wasn’t fully integrated into the sevens set-up then and I had to learn as I went.

“Coming into the last few months, Ciaran was very clear around what he wanted us to work on as individuals and as a group and that has meant that I have felt more at home in the sevens environment.

“Our systems within the group have really been growing nicely and I think that many of us as players have had the Commonwealth Games circled in our calendars for a while.

“We have not played a tournament since the end of May when were at Twickenham, but we managed to get some time off and I think that was good physically, but more importantly mentally as the circuit can be quite full on.

“It meant that I felt recharged coming into our block of training before the Commonwealth Games and now I just can’t wait to get back out on the pitch again.

“What is also really good is that we are playing over the three days in the same venue as the Scotland women’s team which is something we don’t often get to do.

“We know that with Birmingham being just down the road, both teams will have a lot of support and it is up to us as players to give the family, friends and fans something to cheer about.”

Ciaran Beattie: “This is the culmination of a great deal of hard work”

Scotland are currently 12th in the World Sevens Series standings with one more event for the 2022 campaign to come at the end of August in Los Angeles.

They will then play at the World Cup in Cape Town in South Africa before a more uncertain future, but for now all they are thinking about is their first match of Birmingham 2022 versus Tonga at the Coventry Stadium at 12.18pm on Friday.

Ahead of the Games, Ciaran Beattie, the aforementioned head coach of the Scotland squad, said:  “This is the culmination of a great deal of hard work over the past few years and I know how excited the squad is at the prospect of competing on such a grand stage.”

Matt Kidson, the director of sport for Birmingham 2022, said: “The very best rugby sevens teams are going to be competing at the Games, so it will be a really special tournament.

“What’s great about the group stages is that when you come to a session, you see every single team compete - so you’ll see eight men’s matches and four women’s matches, making rugby sevens one of the best value tickets at Birmingham 2022.”

As well as Scotland and Tonga, South Africa and Malaysia are in Pool B of the men’s event at the Games.