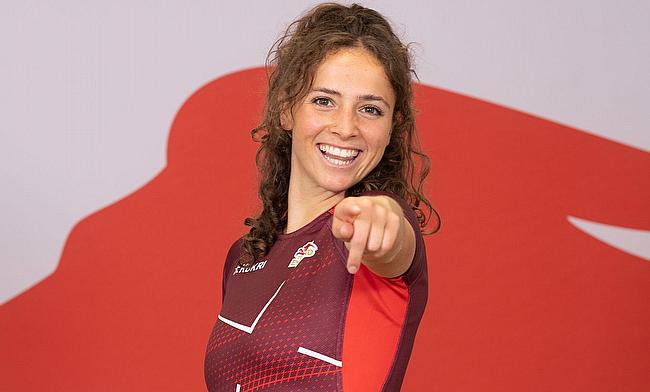 Lauren Torley only took up contact rugby less than three years ago, but now the Durham DMP Sharks player is just days away from representing Team England in the women’s sevens event at the Birmingham 2022 Commonwealth Games.

When she runs out at the Coventry Stadium between July 29 and 31, she will have lots of family and friends cheering her on and, in between ties, she may just get a second to reflect on her amazing journey.

That rugby journey began in the summer of 2018 when she took up Touch and then moved on to contact rugby in Newcastle in the autumn of 2019.

However, her sevens journey - amazingly - only started in the middle of March when she was called in to train with the wider England sevens group.

That led to her being selected for the HSBC World Rugby Sevens Series event in Langford, Canada, in late April and early May.

Since then, she has helped England win the Rugby Europe Trophy after events in Croatia and Hungary in June and, just last weekend, she was part of the squad that was in Romania that qualified for the World Cup.

That showpiece event is in South Africa between September 9th and 11th and Torley’s England will compete in Cape Town alongside Scotland and Wales before the three nations join forces in rugby sevens to create a Great Britain team.

The combined side will take part in the 2023 HSBC World Rugby Sevens Series in both the men’s and women’s game.

The RFU, SRU and WRU feel this move will help Team GB medal at the 2024 Olympics but quite understandably for Torley, all of her thoughts are on the Commonwealth Games: “It has been a crazy few months, but I am just embracing it all really.

“My rugby has moved on very quickly in the last few years and when I was called up to train with England Sevens in March, I had to pinch myself!

“Since then, it has just been a whirlwind. I have just tried to take everything in and learn from the experienced players around me and the girls have been a massive help.

“They are such a close-knit bunch and they have welcomed new faces like myself and Merryn [Doidge, the Exeter Chiefs player] into the fold so well, it has been brilliant.

“In fact recently in camp, they held university ‘graduation ceremonies’ for us both because we were both going to miss the real thing because of rugby. We were there wearing hats they’d make from packaging from Sainsbury’s and it was really fun while it just showed what a real team we are.

“And now I get to go with the team to Birmingham for the Commonwealth Games and I really just cannot wait. It’ll be the first time many of my family and friends will have seen me play live so that’ll be special.”

“I learnt so much in a short space of time”: Touch gave Lauren the rugby bug

Torley, who is originally from Flackwell Heath in Buckinghamshire, always loved playing sport when she was at Claytons Primary School and then Beaconsfield High School.

Hockey and netball were her favourite pastimes and she made it to the cusp of England age-grade honours for both while in secondary school.

“I have always played sport to a high level and when I left school, I was keen to try something else out for a few months before I went on my travels during my gap year,” she explains.

“I joined up with the Thames Valley Vikings Touch team in Reading and that was a great decision for me. They were such a welcoming group of people and it was really fun and I fell in love with Touch almost immediately.

“I learnt so much in a short space of time. I loved the fact that in Touch you have to be really technical and also because it is so fast-paced, it doesn’t really matter what your physicality is or whether you are male or female as you can play together.

“As a result, I was able to develop my skills and my passing pretty quickly because in each training session and match, I was coming up against different types of defenders.

“I liked that challenge and at all times when I wasn’t on my travels during that year, I was playing Touch at the peak sometimes four nights a week. I just loved it!

She also loved travelling to Thailand, Bali, Australia, Vietnam, Cambodia and Laos and getting stamps on her passport filled up 2018/19 until she went to Newcastle University to study psychology and nutrition.

“Touch had whetted my appetite to give contact rugby a go, so I went along to the Freshers Fayre and met up with the girls from the university rugby club,” Torley continues.

“I got involved with them and played my first game, but then I got quite a bad injury when my lung collapsed. I was in the hospital for five days because of that and by the time I had fully recovered, we were nearly into Covid times [the first lockdown in the UK was called on March 23, 2020] so I had not been able to play as much at all in my first year of uni as I’d have liked.

“When Covid was in full swing, the only teams that were able to train and play regularly were really the Premier 15s ones, so I went down to DMP [Durham Sharks] during the pandemic and thankfully I managed to gain a place in the squad. The coaches and others there took a gamble on me which I am grateful for.

“Training and playing alongside more experienced players really helped me progress quickly and I have just taken things from there really, learning on the wing and playing across the back three now.”