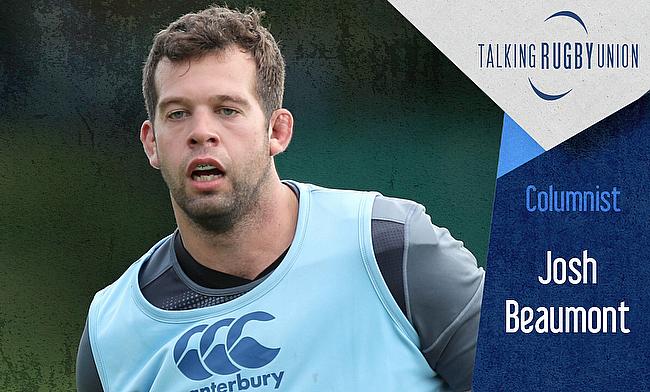 In his first TRU column of the new season, sponsered by PureVPN, Sale Sharks’ Josh Beaumont looks forward to the World Cup in Japan plus he also discusses England’s hopes for the tournament as well as the start of the Premiership Cup.

Injuries would have been on the mind during warm-ups

It is always tricky in warm-up games. You always want to put your hand up for selection, but also in the back of your mind, you have got the real thing coming up so you are more cautious when it comes to potential injury.

We caught up with Eddie to get his thoughts on the eve of England's #RWC2019 opener in Sapporo: https://t.co/rIDVFIWDtG pic.twitter.com/GggKsswE1A

We have been facing a similar thing at Sale. We have got four Premiership Cup games which will be competitive. We have done a tough block of pre-season so you are wanting to get into that game routine and into playing rather than worrying about injury. The games are designed to be competitive, and now we are keen to get some minutes under the belt and get our game ready.

I did watch both matches between Wales and Ireland and I thought they were pretty poor to be honest. Neither team played a decent style of rugby and you could see how tentative it was because players didn’t want to get injured. Overall, for England, I do think they came out of those warm-up games feeling quite good about themselves and they would have been to come through them pretty much unscathed.

Final hurrah in the Toon

From a defensive point of view, England would have been happy with their last result against Italy. The second half was a lot better than the first and was probably a sign of how fit they are feeling. It probably puts them in a good mindset for the World Cup and they will be in a good spot right now going into the Tonga match.

Power game can be main weapon for Eddie

The thing that stood out for me was probably that power game England have been renowned for over the last couple of years. They are always solid in defence, especially when they bring that line-speed. They put you under immense pressure. When Billy [Vunipola] is playing at 8, he gets the whole pack going forward. They are a tough team to break.

The half-backs are very smart in terms of the kicking game because it does pin you back as a team so I would say the ability England have to put teams under great pressure, as well as out-muscling sides, is their best weapon. If they can have a strong and dominant set-piece, they will feel like they are always in the game. The only minor thing I would say is England may be focusing on achieving that 80-minute performance rather than showing glimpses in 10-minute blocks.

I do think they need to stay disciplined too. With the new laws coming in, they can’t afford to lose concentration in these crucial moments and in these big games. They have got some huge group games so it is about keeping that composure and trusting their abilities as well as the systems put in place. It will be key to ensure they always have 15 players on the pitch as well as not giving away silly penalties.

It is the most competitive World Cup in recent times, but of course England can win it!

I did watch both Wales and Ireland matches and despite their results, I think Wales will always be a tough team to beat. They are always well drilled and have got a lot of good players. Losing Gareth Anscombe was a big loss to them. I think they will be reliant on Dan Biggar now. He may be slightly more structured in the way he plays at 10, but he is a great player and Wales are a good outfit.

For Ireland, they were much improved against Wales against that loss to England at Twickenham. They may have got their World Cup selection right, but I am not being biased when I say this; they may be could have done with someone like Will [Addison] in the backs for a bit more creativity and versatility! They did show they struggled at the set-piece, in particular at the line-out, but they will be confident of sorting that out and they will be confident in general because they have had a lot of good results against some top teams over the last couple of years.

I do think this will be the most competitive World Cup we have seen in the last few years. With New Zealand now being as standout in the lead up to the tournament, I think a lot of teams will fancy their chances, but of course, England can win the World Cup!!

Sale back in business

The Premiership Cup is not too far away and we can’t wait to get going! It has felt like a very long pre-season! You can see lads are just ready in training. When you are going against your own team-mates for eight or nine weeks, you can tell players just want to get out there and get some real competitive rugby underway against a different team.

TEAM NEWS | #SharksFamily you voted yes to an early release, so here it is....

7?? New Signings will make their debuts at the AJ Bell Stadium this weekend!
??‍?? Josh Beaumont captains the side!

We are massively excited. Of course, every team will be feeling confident at this point in the season and we are ready to build from last year and show what we can do in these Premiership Cup games.

To find out more about PureVPN and how you can watch the Rugby World Cup 2019 from wherever you are, take a look at this simple guide: https://www.purevpn.com/stream-sports/watch-rugby-world-cup-live