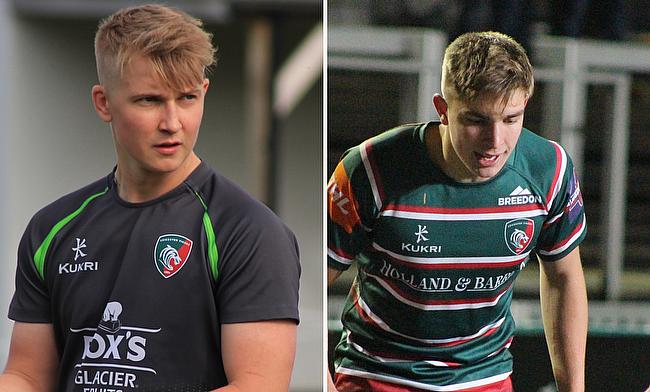 Zack Henry: ‘Outrageous Leicester opportunity’ to good to turn down
Can Leicester Tigers now turn over a new leaf?
Kaleb Trask: It is a real privilege to be part of this environment
"Unforgettable" England experience can be a catalyst for Olowofela

Jonny Law and Jack van Poortvliet are looking forward to the future, but it seemed reasonable to ask the scrum-half pairing whether they are relishing the healthy competition for the number nine shirt – a position at Leicester Tigers which could well be hotly contested over the next few years.

The 19-year-old duo both agree the challenge for a place in the senior matchday squad drives them on, but whilst having that target, they also have the desire to continue learning. “No-one is perfect so you have always got your areas to improve on," says Law.

Law and van Poortvliet, along with the likes of Ben White and Harry Simmons, in a sense, have the best of both worlds.

Whilst eager to continue impressing, the aforementioned quartet have also got one of the most experienced scrum-halves to learn from at Oval Park in the shape of Ben Youngs. The 30-year-old currently sits on 101 Test caps and for both Law and van Poortvliet, soaking up the knowledge from the England international is priceless.

“It helps having someone like Ben who is the senior scrum-half in the group,” says Law. "Him and George Ford are two of the best half-backs in the world at the moment. For me, that is perfect. It means I have got someone in my position who I can talk to about how he goes about his game, but also someone who is just outside of me who wants good communication from me.”

Delighted to have extended with @LeicesterTigers I will continue to give everything to the club that has given everything to me. Thanks for all the support from the tigers family thank you and keep safe ?? pic.twitter.com/0ZiEPlwc5n

“Having Ben as a role model and having someone to look up to and follow has been really good,” adds van Poortvliet. “Now having the opportunity to work with him and pick his brains means I am in a very fortunate position and I am loving it.”

For van Poortvliet, the small village where he is from in Norfolk is only 10-15 minutes away from where Youngs is from and the scrum-half hopes to follow a similar path in the game.

Law will be keen to do the same and a clue that Leicester might have buried gold in Youngs’ proteges is evident when looking at the recent success the Tigers’ academy has experienced. Over the last couple of years, both scrum-halves have enjoyed the club’s back-to-back triumphs at U18 level and whilst silverware in the age-grade system may not have any bearing on what the bigger picture could look like, the faith in youth which has been shown by Director of Rugby Geordan Murphy gives van Poortvliet and Law cause for optimism.

“The academy system at Tigers is unbelievable,” Law says. “I have been in the ‘system’ since I was about 13 so you have got quite a few years even before the academy starts, to sort of show yourself and learn the Tigers way. The success of the young lads over the last few years like your Jordan Olowofela’s and Ben White’s who have been given opportunities has been great and they have taken advantage of that.

“The club have seen that and thought actually, we can start building the core of the club around the younger lads and for me, the academy success has helped as well.”

“There has always been talent coming through the academy, but when you are getting academy success with that, then people recognise it more,” van Poortvliet adds. “The academy does a great job. I know we saw it when we were in the academy, people breaking through in the year above us and it just gave us that excitement that we could do it too. What is great is coming through with boys you have played with as well and now we are a close group and we are loving it.”

Based on what Law and van Poortvliet are discussing, things do seem positive for the pair as they aim for more first team action in the future. Alongside Leicester’s ambition to keep producing young players, the fact that the duo have also represented England at age-grade level is another feather in their respective caps.

For U20 international van Poortvliet, he also has a Premiership appearance under his belt after featuring for the Tigers against Sale Sharks back in February and both he and his fellow scrum-half Law re-signed with the club during lockdown.

Since the coronavirus pandemic struck, it has been a difficult period for the Tigers. Their contract negotiations and financial situation was played out in front of the media, but now Leicester are hoping to put that behind them and focus on the future, a future which could well include Law and Van Poortvielt.

“It was really easy [decision to sign],” says van Poortvliet. “As I said, the club is big now about how key we, as young players, are to the future and also to the group now as it is.

Disappointing result on Friday but honoured to make my prem debut for my boyhood club.

“I think there is so much good for us young lads coming through with a great vision for the club that Steve [Borthwick] has brought in. It is really exciting and I am loving it at the moment.”

The process of Law and van Poortvliet trying to take their next steps in the game may well continue when the Gallagher Premiership season resumes in just over two weeks’ time.

Leicester travel to Exeter Chiefs on August 15th and with the threat of relegation no longer an issue due to Saracens’ salary cap breach, opportunities may well be presented to the likes of van Poortvliet and Law to showcase what they can do in the remainder of the campaign.

Following the arrival of new head coach Steve Borthwick, there has been a wave of excitement around Welford Road and for two of his emerging talents, they will be hoping to play their part in a new era for the club.

“We had a meeting after Steve’s first week here and after that, I was just ready to get going and ready to get out there playing,” adds Law. “I think, especially about how they [the coaching staff] have talked about the young lads and how important the young lads are to the club, for me, that is really exciting. It shows they have got the trust in the younger lads. I am really excited about what is to come over the next couple of years.”

“I was enjoying that period of time [before lockdown],” says van Poortvliet. “I thought it was a great experience playing for England U20s. Just getting that opportunity too, which I wasn’t expecting, in the Premiership, was great.

“It did give me that boost in lockdown almost as well, to push on and to now work harder to know that I am not that far away.”