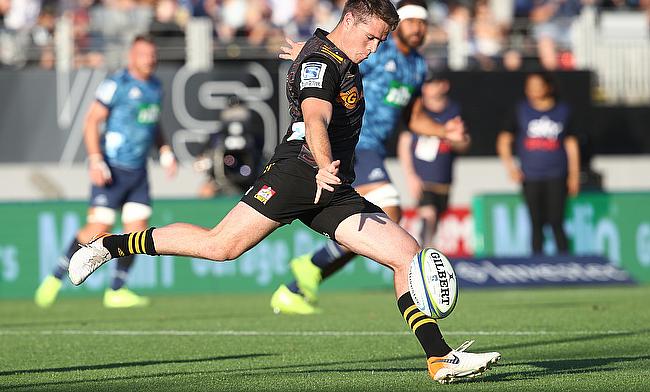 After two weeks of Super Rugby Aotearoa, Warren Gatland’s Chiefs are still yet to win a game.

Close defeats against both the Highlanders and Blues means the side sit second bottom in the standings, with a losing bonus point the only reason why the Chiefs aren't on zero points with the Hurricanes.

Starting at fly-half against the Highlanders on the first weekend of rugby’s return was 21-year-old, Kaleb Trask. Very much the local boy, he attended Rotorua Boys’ High School before going on to represent the Bay of Plenty in the Mitre 10, prior to recognition from Warren Gatland and the Chiefs.

Still in his first season with the Super Rugby franchise, Trask is benefitting from the tutelage of All Blacks Aaron Cruden and Damian McKenzie. The former was an influential figure in New Zealand’s 2011 Rugby World Cup victory, replacing Dan Carter, whilst McKenzie is widely considered to be one of the world’s best attacking threats.

“They are quality players and I am pretty lucky to be in the position that I am,” Trask said. “They have just been wicked. They offer plenty of experience and always lend a hand when I need one. They both have parts of their game that I want to effect in mine and they are real helpful in trying to teach me.”

New Zealand has been the first country to restart rugby union effectively. With games broadcast live around the world, never before has there been such a spotlight on the sport. For Trask, in his first year with the Chiefs, it has been a challenging period, but one that he has been enjoying.

“It has been a great challenge and a real privilege to be in this environment,” Trask said. “Obviously, with Covid happening, overseas they’re not really playing much footy, so over here we are real privileged to be playing at the moment and I am enjoying it.”

In 2018, Trask represented New Zealand U20s at the World Rugby U20 Championship in France, starting in the opener against Japan. Ultimately, the Baby Blacks would finish fourth overall, falling 10 points short to South Africa in the third-place play-off.

It was in that year that Trask got his first crack at Mitre 10 rugby. Representing Bay of Plenty, the side finished fifth overall and they missed out on the promotion play-offs by three points. Playing behind former All Black and Newcastle Falcons first five-eighth Mike Delaney in his debut season, Trask became a regular starter the following term as Bay of Plenty topped the championship.

Following in the footsteps of New Zealand captain Sam Cane to represent the Mitre 10 side and the Chiefs in Super Rugby, Trask is hoping that his career can take a similar path to his captain, although he is largely just focusing on playing the best rugby possible.

Quickly establishing himself as Aaron Cruden’s back-up in the 10 jersey, Trask has actually kicked off two seasons as the starting fly-half.

When rugby restarted two weekends ago, a similar pattern followed as Trask was preferred to the vastly more experienced Cruden. Playing in front of a ferocious crowd at Forsyth Barr, he pulled the strings against the Highlanders and the Chiefs were only six points adrift of their hosts at half-time.

“It was a bit of déjà vu (starting against the Highlanders), because the first game of the season when we first played the Blues, I started that one and Cruden came off the bench,” Trask said. “So, it was a kind of similar feeling. I was stoked to get the start, I was quite nervous, but I thought I did alright.

“Everyone was stoked to get the crowds back and it was a great atmosphere down there. Especially with the uni there, they’ve got a thing called ‘The Zoo’ and that was going off. It was pretty cool.”

Bryn Gatland slotted a late drop goal to break Chiefs hearts on matchday one and the following weekend wasn’t much better for Trask and his teammates as they lost to the Blues 24-12, this time on home soil.

Things will not be getting much easier this weekend for the Chiefs. They will come up against the Crusaders, who hammered the Hurricanes 25-39 away from home in their first game back and on this occassion, Trask will be starting from the bench.

Losing loose forward Luke Jacobson to injury, fans of Warren Gatland’s side will be glad to see that Sam Cane has returned to start at openside flanker. Having had another week to work on their shortcomings, Trask believes that the Chiefs have turned a corner.

“We have learnt a lot,” Trask said. “We just need to fix a few things that’ll help our game, it is not a lot. We are training really well, we just need to take that on the field. If we can play how we train, then we should be sweet with all of our games. Hopefully (we get) a win, we need a win to get us back on track.”