"Unforgettable" England experience can be a catalyst for Olowofela 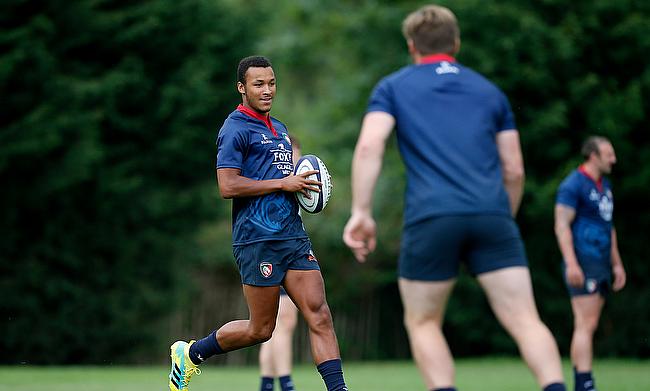 England's Uncapped: Who Are They?
Chris Ashton named in England's pre-season training squad
France clinch maiden World Rugby U20 Championship title with 25-33 win over England in final
Olowofela and Walker double powers England U20 to 39-18 win against Argentina

Leicester Tigers’ Jordan Olowofela says being part of the England senior set-up for the first time was a moment he will never forget.

The versatile back was named in England’s 44-man training squad last Thursday and his call-up comes after he produced some dazzling performances at the World Rugby U20 Championships earlier this summer.

“It was an unforgettable experience. I didn’t see it coming at all, but to be invited to train with the seniors was amazing,” he told TRU.

"To train amongst the best players in England was really good. You are learning so much all the time.

“We know Eddie [Jones] is watching the U20s squad closely so you always have in the back of your mind that if you play well, you might get invited. You never think it would happen, but it did!”

After impressing at the U20 Six Nations and U20 World Championships Jordan Olowofela and Gabriel Ibitoye are training with the full @EnglandRugby squad.

This year, Olowofela has burst on to the scene for both club and country. His debut for England U20s came during the Six Nations and two months later, he made his Premiership bow for Leicester against Bath at Twickenham.

“Growing up, I always wanted to play for Leicester,” he said.

“I started off in the academy in 2014 and worked my way up with the ambition of just wanting to play. I made it to the development squad, but to be given that opportunity to play was a dream come true.

“To make my debut at Twickenham was amazing because it is a place that you don’t get to play at many times. We as young players need that exposure. I know coaches have to give it us slowly, but getting these chances just helps you moving forward.”

?? | Congratulations to Jordan Olowofela, who made his Premiership debut for the #TigersFamily in today's bonus-point win over Bath at Twickenham!! pic.twitter.com/gyJlpKqREI

Olowofela is hoping to be regularly involved with the first team at Leicester this season and over the last couple of years, he has been able to develop his game.

He played a handful of matches in the A-League and the Anglo-Welsh Cup for the Tigers in 2017/18, but he was also sent on loan to National One side Loughborough Students.

“It [moving to Loughborough] was massive for me,” he said. “You don’t see it at the time.

“You might think that your main club doesn’t want you because you are going off on loan just to play games, but when you get the opportunity to play for a different team consistently, you can really work on your skills and start improving gradually.

“When you play in the A-League or the Anglo-Welsh, it is sort of not the same step up because you have learnt to play in National One with men so the National Leagues really help you get ready for what is to come.”

The 20-year-old is now aiming to thrive at Welford Road and Head Coach Matt O’Connor has got a wealth of talent at his disposal, especially in the backs.

Olowofela knows there is a lot of work ahead if he is to gain more opportunities and after having a taste of senior rugby with England, he is determined to impress this term.

He added: “Leicester is a world class environment. We have got some top coaches such as Geordan Murphy. He has pretty much done it all and he played in my position as well so that is really key!

“You also have some star players like Jonny May and Telusa Veainu who always help you and you can shadow what they are doing with confidence.

“There is still a bit of work to do, but I would like to consistently play. The aim is to try and get into the squad and then go from there really!

“You always want to be impressing. I know now that Eddie Jones is looking at young players so you have to keep working hard to hopefully get the call back to train with them again”