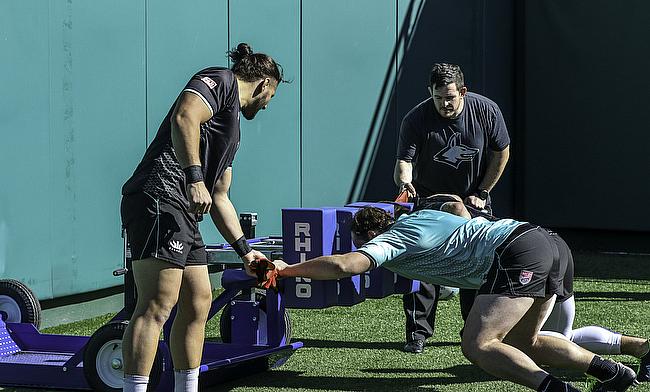 Whilst the Six Nations campaign underway on Saturday, former Wales prop Aaron Jarvis will be coaching the Dallas Jackals in their first Major League Rugby game.

Playing in a Texas derby against the Austin Gilgronis on the road, it will end the Jackals’ long wait to get out onto the pitch. Having originally looked to join the competition in 2021, the team deferred their inaugural season as a result of the various issues Covid-19 caused.

Even heading into this season, the team has had its challenges. Michael Hodge, who was due to take on the role of Head Coach, was unable to do so as a result of immigration delays in Australia. As a result, Jarvis along with senior players have taken charge of the team’s preparations.

He spoke to TRU about the challenge that the Jackals pose, as well as his thoughts on Wales ahead of this Six Nations.

They do things bigger in America

“It blew my mind,” Jarvis exclaimed. “I drove past the Cowboys stadium earlier and it is incredible. A little bit further up is the Rangers stadium, and the roof was opening.

“They are literally 500m apart and then we (the Jackals) are over the road. It’s not even an old stadium. It’s about 25 years old and we are in there. It blows my mind.”

It is less than a week since Aaron Jarvis has arrived in Dallas, and he was straight into action. During his playing career the prop played at some of the most famous stadiums in rugby, calling the Marcel Michelin home whilst turning out for Clermont for two years.

Now, his new office is Choctaw Stadium. In years gone by, the 48,000-seater stadium has largely been the home of Major League Baseball side, the Texas Rangers, who left to play across E Randoll Mill Road at Globe Life Field.

AT&T Stadium is just a stone’s throw away also, the home of the Dallas Cowboys completing the trio of world class stadia in that corner of Arlington, Texas. Whilst the Cowboys and Rangers are famous names across the sporting world, the Jackals are making their tentative first steps into professional sport.

?? Prop @aaronjarvis0 has today announced his decision to retire from professional rugby ??

The former @WelshRugbyUnion ace will now take up a coaching job overseas ????

They have recruited Henry Trinder, Chris Pennell, Ryan Bower and Todd Gleave with Premiership experience, much of the rest of the squad made up of local US talent and players that have called America home for a number of years.

Finishing his playing career in Europe to take on this coaching role full-time, Jarvis says it is the team’s ethos of developing local talent that lured him to the States.

“I am a big believer that when I am out of my comfort zone and I am challenged, that is when I am learning and I am at my best,” he said. “It was definitely the same in my playing career, which is one of the reasons I looked at this as an option.

“The whole way the Jackals are going about it with developing US talent, I just thought it was such a great opportunity to be a part of.

“I have been keeping an eye on MLR. I wouldn’t say every weekend, but I was aware that it was there, and I should keep watching to see if it would keep growing.

“Then finding out about this opportunity, it was something that I really wanted to pursue.”

Much of the talent recruited by the team’s General Manager, Elaine Vassie, is from North America. Seasoned MLR players in the form of Chad London, Mike Matarazzo, Bronson Teles, Alex Tucci and Carlo de Nysschen have made their way to Texas, whilst crossover athletes programme, the American Raptors, have had their stocks raided.

At the time of speaking, Jarvis is still extremely new to the environment and was enthused about what he had already encountered.

“It has actually been great,” Jarvis said, “meeting so many people from different parts of the world and from the US. They are all so athletically gifted, it is ridiculous. If I had any of their athleticism in my career – it is unbelievable. I can’t describe it.

“Their desire to learn is second to none. They just want to learn. They are on it constantly and it is crazy how quickly they are absorbing information and want more information. It’s really enjoyable.

“It is a real eyeopener that they are so keen to learn new bits of information, and that’s what makes it really enjoyable and challenging because you have got to be on the ball.”

Similarly to Gallagher Premiership teams, the Jackals have formed relationships with local amateur clubs in order to send developing players on loan to play their weekly rugby. 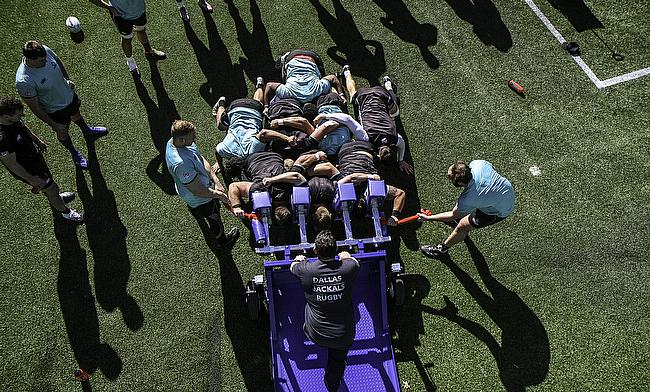 Hoping to create a pathway in Texas to allow for the success of the team, and the national team, in the long-term, the Jackals’ plans are seemingly different to some of the other sides in the competition.

Building from the ground up, success in Dallas will be measured differently to their rivals. Even so, Jarvis is clear in what he wants to see from the team this season, the 35-year-old clearly blown away by the talent at his disposal.

“I am not going into the season thinking we have to win ‘x’ amount of games,” Jarvis explained. “You go into every game trying to win it, that is a given, but for me it is about the process we are trying to ger through and that is more important to me at this stage.

“If we get our process right and keep building, the results inevitably take care of themselves. It is going to be a journey. I think there is massive potential in this group of players. Athletically I am like ‘wow’.

“I can’t explain it. We have got a tighthead prop who can beat all the backs doing a vertical jump. It is insanity how athletically gifted some of these boys are.

“I just want to focus on that process of the things we are trying to do and how we improve and concentrate on ourselves.”

November will bring around the 10-year anniversary of Jarvis’ debut for Wales. Playing Argentina in Cardiff, the front-row would pick up 17 more caps and played in three matches at the 2015 Rugby World Cup that was hosted by England.

Qualifying for Wales thanks to his grandmother, Exeter-born Jarvis spent the better part of 10 years in the country. Whether that was in order to gain his first caps or to begin his transition between playing and coaching, Jarvis is more than aware of the pressure country which the country is when it comes to international rugby.

At the end of 2020, Wayne Pivac had people calling for his head. Finishing fifth in the championship, and fifth in the Autumn Nations Cup, it was an abysmal year for a side who the year prior completed a Grand Slam under Warren Gatland.

Last year Wales climbed back to top spot in the Six Nations, and only missed out on another Grand Slam as a result of a 32-30 loss to France in Paris. Coming into this tournament, Wales have Alun Wyn Jones, Taulupe Faletau, Justin Tipuric, George North and Leigh Halfpenny unavailable due to injury, leading to concerns on title defence hopes.

This, including England’s resurgence in the Autumn, Scotland’s impressive showings, Ireland’s constant ability to win the competition and France’s renaissance, mean for Jarvis that plenty of times will be competing to win the Six Nations early in the Spring.

“The expectation from the public in Wales is always to win,” Jarvis said. “The Six Nations is going to be quite exciting; I think five of the six teams have all got a chance.

“You look at the squads that these guys have got now, it is going to be an interesting Six Nations. Look at France; the improvements they have made over the last few years, and you can’t discount any of the six other nations. It is ridiculous. It is going to be exciting.

“You speak about Wales and there being injuries, but that is a great time for someone to step up, for someone to say that it is their time. This is a huge opportunity for someone. Hopefully whoever grabs with it and goes with it.”

Ones to look out for - Taine Basham and Ben Carter

Having so recently been spending his time both playing and coaching with the United Rugby Championship’s Dragons, it felt pertinent to ask about the players the province has provided to Wayne Pivac’s squad for the Six Nations.

When the question is asked, the 35-year-old comes picks two players from the top of his head in lightning quick fashion.

The first is back-row forward Taine Basham (22, seven caps), before a lock who is no doubt looking to step into the breach left by Alun Wyn Jones’ being unavailable for selection due to injury.

“He’s special,” Jarvis said. “He’s a special rugby player. What makes Taine special? I don’t want to sound awful. He’s not the biggest guy, but his ball carrying ability and his footwork and the way he busts tackles.

“You know when someone has got that X-Factor to make something happen by making a linebreak, breaking a tackle and making an offload, he has got that and a lot of it.

“Ben Carter (21, five caps), he is a future leader I would say. He has got the ability to be a captain. He’s got the knowledge, speaks really well and he works incredibly hard. He would be the first in and the last out, just looking at video and trying to improve his game all the time.”